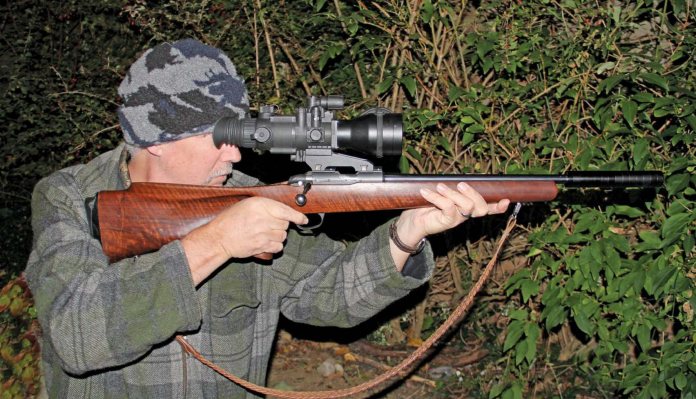 It’s always nice when the nights draw in, as all the new Night Vision (NV) equipment comes on the market to play with, and let’s face it, any form of NV is useful kit for any hunting/vermin orientated shooter these days. With all the new digital age and equipment flooding the market, it’s still nice to see the older style intensifier tubed NV kit still available. An added bonus is often prices are reduced, so that good generation tubes of better quality and clarity of detection are available at a reasonable cost.

One such sight is Pulsar’s Phantom 4x60MD (Mil Dot). This is a conventional tube-type sight, available in Russian Gen 2 + intensifier and either conventional green or black white phosphor screen, which I had. You have a 4x power magnification, with a large 60mm objective lens and best of all for me; conventional elevation and windage adjustment. So, just like a normal day scope, no annoying menu in menu options and the rest of the clutter that modern designers feel we can’t do without; bliss!

Its looks much like any other NV sight, with its high-mounted position on the rifle via the twin mount, Weaver-type mounting clamp system. Two large knurled nuts secure the clamp to your bases and keeps the Phantom secure. It is 320mm long by 95mm wide and 103mm deep and weighs in at 1245 grams, so other than the high mounts, quiet a compact and medium weighted unit.

The Phantom comes with all the kit you need from the off, with on board IR illuminator, extra Weaver accessory rail and lens cover and remote-control unit if desired. This model has a good-sized objective lens of 60mm diameter for maximum light gathering, to allow what light there is to enter the Phantom and then have this intensified by the internal tube. This, by the way, is the Russian Gen 2+ variety that has a high spec of 45 lines per mm, with fine definition and light gain. You can opt for traditional green screen or black and white phosphor, I opted for the latter. This gives a really nice sharp and well-defined image on the screen for viewing and I found it easier to differentiate between rabbit and mud easier.

You have a fixed 4x magnification, which to me is plenty, but some may want more and so an NV60 1.5x convertor is available as an accessory for £119.95, if you so desire. Power is supplied very simply by a single CR123A battery or AA battery, so nice options in case you run out of power and can access a different source of batteries at the petrol station. 24 hours with the larger CR 123A without IR on and 5 hours with it on continuous use.

Next to the battery compartment and on top of the sight, is the IR intensifier, which is small but surprisingly good. It is mounted to not interfere with the objective lens and has a twist-type lens or beam focus objective itself. This allows a flood or fringe wide spread of the beam, as you desire.

The reticle is a Mil-Dot type that is permanently centred and has a small central coverage, which is prefect for precise shot placement and extra aiming marks for range if desired. At the rear of the sight are the conventional adjustment turrets for elevation and windage, much to my liking. They have waterproof covers and one click adjusts the aim 1-MOA at 100 yards, which is quite large, but I had no problems with a rimfire at 50 yards. Simple to use and precise and you can zero in minutes. There is a large knurled rubber ring for eyepiece focus and an eye shield rubber cup to stop any extraneous light entering the eyepiece.

To focus the main sight, there is a right-mounted focus knob with a prefocussed 100 metre setting. The front 60mm objective lens has a rubber protective bikini-type cover that has a similar attachment to the objective, so it is not lost when flipped up in use and a pin hole aperture when in place to facilitate zeroing in daylight hours. The whole unit is made from high impact fibre glass and is tested to be waterproof to IPX6 and nitrogen purged lens system.

I fitted the Phantom to my Sako Finnfire via Deben 3/8” to Weaver conversion mounts. The Sako has a custom Wenig stock with a quite high comb, so I had one issue with the overall height of the sight. I zeroed in at 50 yards with the Winchester Max 42-grain, sub-sonic ammo, which were working very well in the rifle. I love the ease of zeroing this Phantom, with conventional turrets as opposed to digital menus. Six shots and I was dead on aim.

I used the Phantom on cloudy, half-moon lit nights and no moon at all. I have to say it performed very well and I loved the image produced by the black white screen. The Gen2+ works remarkably well without an IR illuminator turned on unlike digital models, and I could easily see foxes out 400 yards, but the shooting range would be 150-200yds absolute max with the reticle size and magnification range.

To me, the Phantom is an NV scope for below that range, as it offers detection at that distance and beyond, so allowing you to see your target, then get down wind, sneak in and then have an assured safe shot. You have a clear and well-defined image too, with plenty of definition and lack of ‘fizz’. Only when the non-moon nights were encountered, or in barns, did I switch on the IR illuminator to boost the detection.

I had great fun amongst the rabbits and was soon toppling bunnies with this set up and as an all-round, cost effective NV sight, I think the Phantom is near perfect.

Sometimes, less is more and the price is spent in a better tube intensifier for better quality without all the frippery that to me is unnecessary. The Phantom looks like any older generic NV tubed sight but as soon as you turn it on you realise you have a lot of scope for the money. This black & white imaged version is my favourite and the 4x power was fine for me, as I keep ranges sensible but a 1.5x converter is available. Costing well under £2000 is a good price in my book and offers good value for money and you get Thomas Jacks’ good 3-year guarantee and back up service too.