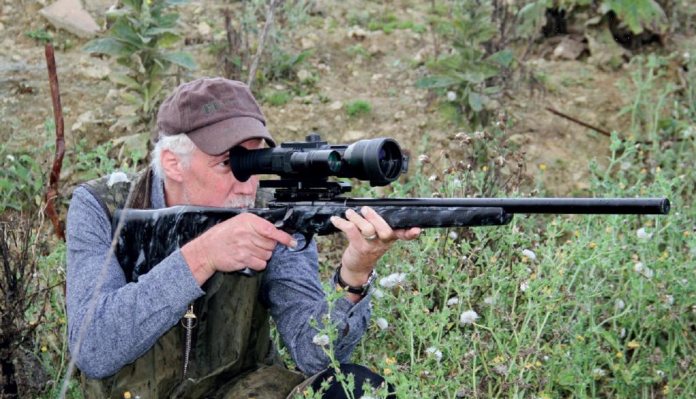 Digital Night Vision (NV) kit has certainly cut the cost of ownership and using an NV device for vermin control be it rabbits or foxes. Most sights of this type need the addition of an Infrared IR illuminator to boost the image significantly but as with all thing’s, technology moves on and more digital NV devices possess better viewing and detection ranges in ambient lighting conditions.

The Yukon N470S is one such sight. It is part of the improved Sightline series distributed by Thomas Jacks Ltd and has a new 1024x768 HD AMOLED display for a clearer image that can be used, as all digital NV kit, in the day or at night time. This model offers 6.0x magnification, with a 4x digital zoom to a maximum of 24.0x power, more than enough.

Being digital you also have the usual array of options, such as six selectable reticules with a choice of colours, rifle profiles and zeroing ranges, so that the unit can be used on more than one rifle. The N470S model has a larger 60mm objective lens than the N450S model with its 50mm lens. Retailing for £819.95 it offers good value for money for the performance it gives the shooter.

This Yukon follows the format of the older NV style devices with a Weaver base attached to a rectangular bodyshell rather than the 30mm ‘day scope’ profile that’s is so popular these days. No matter, it means the Sightline is a bit higher when mounted but it packs a lot of features into its boxy shape. At 1150-grams and measuring 315x89x88mm it is actually quite compact and well balanced. The Weaver base has a few positions to help get good eye relief on any rifle and it also has a generous built-in eye relief anyway.

There are two power options, a rechargeable DNV power pack that lasts about 4-5 hours dependent on IR usage or a battery pack (AA) can be used instead. It only takes about five seconds for the N470S to fire up with the top-mounted on/ off button and a brief press. When on, another brief press switches off the display to save power and a prolonged hold switches the Yukon off totally.

The whole unit is rugged and waterproof to IPX4 rating and the larger 60mm objective lens has a good flip-up cover and small aperture for closure and daytime use in bright lighting conditions. The eyepiece is protected by a rubberised concertina cup. This cuts out extraneous lighting for a clear image on the uprated 1024x768 AMOLED display. This can be quickly focused with the ring on the eyepiece for a sharp, defined image. The forward focus for distance is achieved by the rubberised, smooth focus ring on the objective, and although a left mounted control would be handier it still produces a quick sharp image.

There is an on-board IR illuminator to the right of the body as well as an additional Weaver rail for external IR mounting if you so wish, so rimfire to centrefire range can be customised. The on-board 850nm IR is eye-safe with three levels of intensity and it has a focusable beam.

The main menu is accessed via the large rotating wheel on top of the unit. A brief press on the rotary command allows the change of contrast, distance selection and image brightness as well as digital magnification in small 0.1x amounts. If you press and hold the top button then the main menu is accessed and initiated, simply turn the outer wheel and press the top button for selection of the option.

Reticle choice is good, with six options and colours to suit your requirements. You can also save preferences for three different rifles which is handier than it sounds, but remember which is which! I like the red centre dot myself.

Zeroing has ten distance options so you can have 50 yards for rimfire and 100 yards for centrefire, with differing bullet weights and velocities. Adjustment is via the well-established coordinate system, adjusting the point of aim with the moving reticle highlighted for windage and elevation on the X and Y-axis. I actually have begun to like this system now as it gives a smooth and accurate zero or re-zero facility, plus the X and Y coordinates are shown in the top right of the screen as a figure. This means that you can jot them down for safekeeping and re-check if there is a zero issue.

Each click value relates to 7.5mm at 100m with a possible maximum adjustment of 1.5m at this distance. But remember an increase in magnification will change the values. I always practice in the daytime and then re-check at night at two known distances to be sure.

There is a Picture in Picture display (PIP) function that gives a secondary smaller image at a higher magnification above the aiming mark. It is very handy for viewing and using for a shot. There is also a cant display which is quite useful but not really necessary.

Overall build quality is very good, with the whole sight feeling tough, plus all controls are sealed and/or rubberised making the unit resilient to the great British weather or an uncaring owner!

For the foxes, I fitted the N470s to my 30-47L shooting 110-grain V-Maxes at 3000 fps. Immediately you notice the better image of this N470S over previous models and at under £900 it starts to seem like money well spent.

With no ambient light, like all Digital kit, it does struggle but as soon as the moon shines, bingo! Turn the IR on and you can see the difference the AMOLD screen makes and the sensor resolution of 1280 x 720 pixels. Play around with the contrast and brightness controls to eliminate some of the built-in automatic dimmer functions and the image is both crisp and well defined, plus it has a good white/black tone to it.

The addition of the excellent Night Master NM1 IR gives amazing images right out to 200 yards for rabbits, and further for foxes. You can spot and view past this range but this Yukon is all about the better image quality at sensible hunting ranges, for a clearer and more defined shot placement.

Starting with 6x magnification is sensible and safe as it provides a wide field of view (4.1°) so that you can see what’s on the periphery. Yes, the digital zoom goes all the way up to 24x, well you are either an excellent shot or possess poor fieldcraft if you need that level! In any case, past 12-14x the image pixelates a lot and is really only good for observation or spotting game in the dark.

On the Sako SSR custom fully silenced .22 rimfire, the Yukon proved exceptionally effective. All the shots were under 75 yards but with a far better image than most digital NV kit, headshots were no problems. With overhanging branches or foliage, the IR can be turned up/down and wide/narrow as you please. Most of the bunnies were totally unconcerned and unsuspecting so long as we were quiet and kept downwind as usual. We had some good hauls of rabbits with the N470S, and both the farmer and I were very happy with its performance.

Probably the best Digital NV sight on the market today, with enough features to keep most shooters happy without going over the top. Easy setup and zero combined with a good sturdy waterproof build help to inspire confidence. Best of all is the improved digital image which is far better than I had expected. Good, clear, crisp and well-defined images are the trademarks of the Yukon N470S. For the price, it would seem to be a really good option for those wanting an NV sight that can also be used in the daytime.