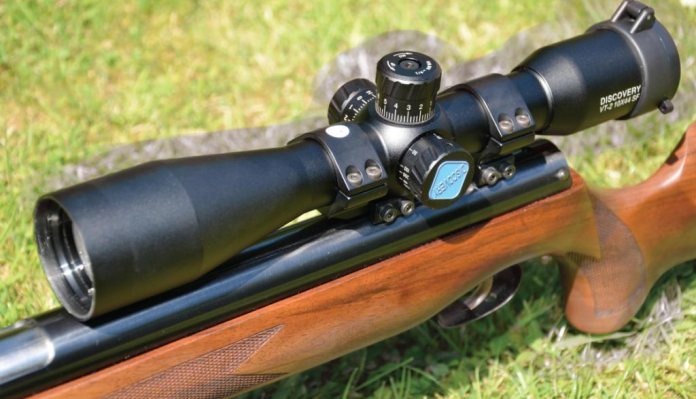 Discovery are a relatively new name to the scope market and are imported into the UK by Sureshot Airguns. It is of course worth noting that their factory was founded in 2014 by an ex-designer of Vortex, so it’s safe to say there’s some pedigree by association at least. The brand has slowly expanded the number of models, and they are becoming well known for the on-board features list, and very modest RRP’s.

The Keep It Simple Stupid (KISS) principle can apply to scopes, and at the more budget end, where a product comes in with a competitive asking price, it can often pay to look for a more straight forward specification. For example, a fixed magnification, rather than a fully adjustable bells and whistles model, that still costs peanuts.

On test here, is the VT-2 10x44SF; a brand-new model from Discovery, offering a fixed 10x mag, and a 44mm objective front lens. Possibly a contender for Hunter Field Target (HFT), but with that side focus facility, maybe a rather neat hunting tool too. With an asking price of £129.99, this model definitely looks competitive, so what do we get for the money?

What’s in the box?

As mentioned, keeping the specification simple, with a fixed mag in this case, means that there are fewer moving parts, and less to go wrong. There are also fewer lenses; so, in theory, the image can be crisper and truer. ‘SF’ in the name denotes Side Focus, and there are also tactical-style, lockable turrets, a single piece 30mm aircraft grade aluminium alloy body tube, and quality flip-up lens caps. No problem if you don’t happen to own 30mm mounts too, since a set are included in the box. Fully multi-coated, lenses, apparently incorporating antireflective compounds, are utilised. There’s the usual fast focus ring at the rear of the eyepiece and there’s also Discovery’s HML design of reticle.

Whilst many scopes at the cheaper end of the market include mounts, (and it can be handy if you happen to be on a really tight budget I suppose), they can be of questionable quality. The set supplied here look perfectly usable, but they are very basic in construction, and also come fitted with those infernal sticky pads inside, that cause more trouble than they’re worth. They’ll do the job, but for a quick investment of around £15-£18, you can get yourself a pair of top quality Sportsmatch units, that just bring peace of mind! That’s an outlay anyone can absorb, you’ll have precision made mounts, and you won’t have to suffer those gummy pads either, that simply leave a trail of glue where it isn’t wanted!

Whinging aside, and with the Discovery all bolted into place, it was zero time. The turrets are quite pronounced, and technically of a tactical-style, but it has to be acknowledged they aren’t as ludicrously chunky as some rivals, where the effectiveness of a padded case becomes compromised; no really! Markings here are nice and clear, with 0 through to 14, and adjustment is done via the push/pull mechanism, pull; set as desired, and push back down to lock. Movement felt a little vague, but slow movement was the answer. Click values are ¼” at 100yards, which I have always found suits me fine. As for the zero, I ran my grid check and the impact point tracked back perfectly.

Gently twist the left dial for side focus (SF), and parallax can be corrected to a specific range, all neatly marked up from 10, 25, 50, 100, 200 yards and ∞. My tester had an actual minimum distance where the target became clear at 17 yards, despite being marked up as 10; but this is a common fault, along with marked distances not always tallying with real usage. Simply stick on your own markings as necessary, and it’s no big deal.

Of more relevance on test, I set the side focus dial to a point between the 10 and 25yd marks where clarity was spot-on for me at 23yards. With that left set, all the usual Hunter Field Target distances in a course (8 out to 45 yards) were shootable. Clarity from around 18 yards was almost perfect, and 35 through to 45yards gave a super crisp sight picture. This is all relevant, since the key rule in HFT dictates that the shooter cannot make any adjustment to the scope for the duration of the tournament. On test, edge-to- edge clarity and brightness were very impressive, with no detectable aberrations or distortions.

As for aim points, Discovery fit their HML reticle to this model, where the initials stand for Half Mil Line. It’s a very usable design, with a cross and an extended down axis, with 5-Mil line values up, and on each side. There are 9-Mil lines down, and small, ½-Mil hash marks in between. Plenty of points of reference then, and with ½-Mil points included, basic bracketing of targets can also be utilised when possible.

So, quite a neat performer, and the flip-down lens caps are even above average quality, with a positive snap to close! All the basic reassurances are here too, with the scope body tube nitrogen-purged with full O-ring seals, and specified as water, fog, and shockproof. Everything you would of course expect, along with the Discovery Lifetime Warranty, and at £129.99 including those mounts, the VT-2 10X44SF really is a terrific bargain.

Perfect for a streamlined hunting scope, a possible candidate for HFT use, and fairly hard to fault!