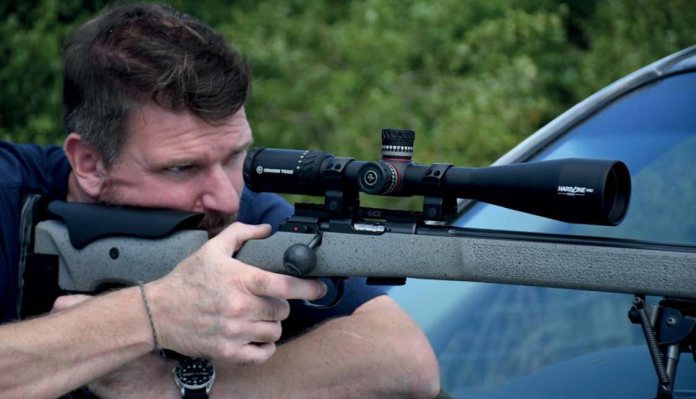 After being introduced to Crimson Trace for the first time at the British Shooting show in March, this is my first opportunity to use one of their scopes on a rifle in the field. The Hardline Pro is the top specification from ‘CT’ and uses one of those magical, desirable specifications that many manufacturers seem to offer, allowing direct head-to-head comparison with similar units from other manufacturers at varying price points - 6-24x magnification with a 50mm objective lens and a 30mm tube, plus parallax adjustability from 50 yards out to infinity. This last factor must be considered if you want to use the scope on an airgun or rimfire, as it restricts minimum range when using high magnification, but at low mag, it is never an issue. I fitted the scope to a CZ457 LRP .22 rimfire, which I rarely ever use below 100m anyway, so the scope suited it well for precision ‘long range rimfire’ use.

The objective lens sits 10mm within the external aluminium bell at the front of the scope’s one-piece aluminium main tube. All surfaces are hard anodised and it’s all smooth to the touch, so you won’t drag skin dust off your fingers and make the scope look ‘floury’.

Both elevation and windage turrets are tall with tactile machined texture to grip at the extremities. Elevation offers 25 MOA per turn, segregated into 100 ¼ MOA clicks per revolution. Turn the turret anti-clockwise to move the point of impact UP. The windage turret is marked left and right of centre with similar clicks accounting for 12.5 MOA in either direction once zeroed.

An instruction book is supplied describing turret setup and returning both indicator dials to mark zero. All clicks are precise with no overrun or mushiness, and I thought it an easy scope to dial, either visually or by feel/hearing alone.

All the numbers are clearly laser engraved white and there is a vernier rotation indicator exposed below each turret, to signify how many rotations you are progressing through.

The total mechanical range is 60 MOA either vertically or horizontally and zeroed at 100 metres, I had 32 MOA remaining for longer range dialling on this specific rifle.

Although a manual is supplied for turret setup once zeroed, it is seeming generic to CT and not model-specific. Essentially, slacken the three circumferential grub screws to turn the outer cap to mark your ‘0’ position. If you want to use the zero-stop, wind these grub screws out far enough to lift the outer cap off entirely and then slacken the inner locking screw. Then, turn the rotor all the way clockwise until it stops. Finally, re-clock it and re-assemble. It’s easy to do but the manual says the turrets lift to turn, which they don’t on this model.

The parallax dial is positioned on the left of the saddle with an illumination rotor extending from within it. Parallax is marked from 50 to infinity and the illumination controls 10 intensity levels for the reticle with intervening off positions. A cap is shown on the end with a screwdriver/coin slot for the internal CR2032 battery.

Will you add accessories?

The magnification is controlled with a rotating collar at the front of the ocular body, rotating approximately 150º from 6x to 24x in a clockwise direction, with the now characteristic Crimson Trace machining pattern for grip around the circumference. The ocular body is parallel and shows a 44mm diameter, with a rubberised fast focus eyepiece at the very rear. This is a slightly larger 46mm in diameter, so just bear that in mind if fitting any additional optical accessories that need to clamp onto the ocular tube.

Mounted up and shooting for zero, I was impressed with the bright image from the moment I looked through the optic. I later found on the spec sheet that CT promotes 90% light transmission, which is impressive for an optic of this mechanical capability. The resolution is good for the price point of the optic, perhaps not quite as sharp on detail as some scopes that are, of course, significantly more expensive, so in fairness, I considered the capability impressive.

The MR1-MOA reticle is in the first focal plane (FFP) and carries multiple hash marks on all four arms to enable aim-offs that remain in true correlation to the dialling turrets on this MOA scope. CT also offers an MRAD version with a corresponding reticle if that’s your preference. It’s generally mine but I can ‘speak’ both languages if necessary.

A detailed instruction sheet is supplied to explain the MOA angular system and relative measurements at distance if you use it for rangefinding. The reticle remains in crisp focus throughout the magnification range and shows heavier outer arms that remain black when the inner span is illuminated red. There is no sparkle or blurring of the reticle. I was happy to use it and on a 4x zoom FFP optic, the ability to light the reticle up is especially helpful when using the low magnification values, retaining a simple point and shoot reticle without undue complication obscuring the target, quarry or bullet splash. I found the reticle easy to focus sharply with the FF eyepiece and it remained so throughout the mag range, with minimal eye relief variation and a welcoming, easy-to-locate eyebox that wasn’t overly critical.

Colours through the scope are bright with decent contrast levels. There is no problematic chromatic aberration and a 100mm sunshade is supplied with the scope to help on awkward light angle days. CT make their scopes in the Philippines but cover the product with a lifetime warranty assuring their ability to withstand complete immersion, extreme temperatures, thermal cycling and vibration for zero retention, plus lifetime recoil damage assurances.

I think this is a good optic with above-average image brightness to combine with a useful specification at the price. It’s a scope where specifications were added or left aside to make that price, and I applaud Crimson Trace for concentrating on reliable function rather than additional mechanics or over-the-top marketing claims.