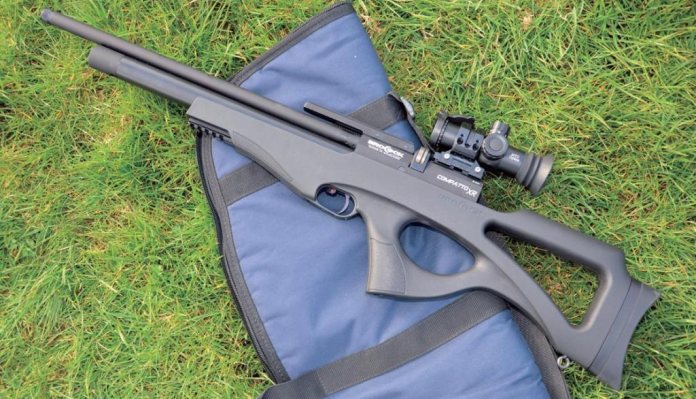 MTC has been known for taking a radical approach to optics, and their highly innovative Viper Connect model has truly cemented itself as a key contender in the world of Hunter Field Target (HFT) shooting. On test, is their latest model and it looks set to raise plenty more eyebrows.

There are three models in the SWAT (Super Wide Angle Technology) Prismatic range; a 12x50, 10x42, and the 10x30 Atom (on test). First impressions of the Atom are all about the length, or lack of it. The body comes in at just over 5”. It includes a flip-up screw-on lens cover at the front, a soft rubber eye shroud, diagonal mount clamp, two 11mm to Picatinny rail adaptors, and three unique mount bases measuring 63mm, 95mm, and 135mm. Being so short brings versatility, and if your gun has limited mounting space, then this model could be the answer. Use of a prism in the lens set up has allowed for such a radical configuration, but further key USP’s are also a huge field of view (FOV) and extremely short eye relief, which means in theory, minimal parallax error. It also comes with an ingenious adjustable patented mounting system.

It comes supplied with a wrap-around diagonal style mounting clamp, and the entire unit then connects to either one of the three bases via two bolts coming in from the underside. The bases allow for adaptability in the rifle’s rail configuration, and are designed for a Picatinny rail. Each base features one protruding bar section, which will act as an arrestor bar. If you are fixing the Atom to a gun which has conventional dovetail rails, then that’s where the small spring-loaded adopter blocks come in.

Taking this route can initially be a bit fiddly, but the end result works for sure. Tighten up the mount base screws enough so that the adaptor blocks can be gently snapped into place under a small amount of spring tension. Then slide the clamps and the entire assembly onto the dovetail rails and tighten it up.

With the scope provisionally positioned, the idea is to roughly zero by using the adjustment built into the mount, rather than purely using the turrets. Known as ‘centring the optics’, the intention is to only be left with minor turret tweaking to achieve absolute zero. MTC makes this possible with their clever sliding ramp system. Make a note of where the mount is exactly on the gun’s rails for a start, then also make a precise note of where the scope body sits along the graduated scale on the base. An element of trial and error is now required. Remove the entire assembly from the rifle, and slacken the two bolts in the underside to allow for the scope to be moved along the scale. A curve is built into the base, to offer integral tilt adjustment, so moving the body to tilt the front of the scope down raises the point of impact (POI), and vice versa, and this is done according to the marked MOA scale - all very neat. Retighten, and fire some more shots until the POI is close. Then fine-tune using the turrets. ‘Centring’ the optics in this way should help avoid running out of adjustment with the scope’s turrets.

Turrets are push/pull style, so pull up to open, push to lock. The clicks are positive, and the turrets are clearly marked. The left turret is the focus adjuster, and smoothly adjusts parallax from 6m-∞ . Given that different eyesight does affect how ranges are displayed, MTC offers a sticker set so users can mark the dial according to their own eyesight. Personally, whilst this feature may be handy for a high mag Field Target scope, I don’t think it’s worth the hassle here. Yes in use, ranges came in differently for me on test (an 18m target showed as 25m on the dial), but given that most of these scopes will either be used for hunting or HFT, where the dials cannot be touched for the duration of the shoot, it’s more about setting parallax to a midpoint, then leaving it alone.

With eye relief specified at just 14mm we are talking a real ‘in your face’ sight picture. Considering a conventional scope is held some 78mm-90mm away, then you can appreciate just what MTC have achieved with this model. In order to get a good sight picture, there has to be contact with the face. The lip of the ocular lens and it’s rubber shroud sits gently against the rim of the eye socket and the nose. This unusual full-on contact mounting arrangement, precludes the Atom’s use on grounds of safety, with any recoiling gun.

As for FOV, it is awesome, offering around 2.5-3 times the amount found in a comparable powered scope! Clarity is good, and the glass etched MD5 reticle offers plenty of clear reference markers, which can also be illuminated in ten stages via a button on the left turret.

If I’m honest, personally, I just find any contact with the face irritating, but plenty of shooters have no such qualms, and the Connect from MTC, as mentioned, has had quite an impact where HFT competition is concerned. As for the Atom, it goes a step further, combining the ‘eyes wide open’shooting sensation, clever mounting, and incredible FOV in a condensed package. The parallax minimizing spec makes a lot of sense on paper, so it does come down to user preference. Fog, water and shockproof comes as no surprise - so what about uses? Well hunting and the outdoor airgun discipline of HFT, are both well served by the SWAT Prismatic configuration, and whilst there are many cheaper alternatives out there, few can offer the handling and radical feel of the mighty Atom!