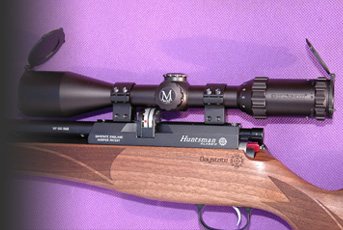 Whenever I am asked to recommend a scope these days for Hunter Field Target Shooting, one scope is always on the shortlist - the MTC Viper. Of course, if a scope is appropriate for this ever demanding sport, you can bet your bottom dollar that it will also be suitable for the hunting fraternity, since hitting a relatively small kill area applies to both disciplines. If a scope is deemed suitable for HFT, it should be taken as read that a certain level of inherent sophistication exists, which is on the whole, transferable to most hunting scenarios. It doesn’t always work the other way though, as many ‘hunting’ scopes feature rather simpler reticles without the plethora of aimpoints that today’s competition shooter has come to expect.

For some reason, the taking of live quarry is often deemed to be less demanding, yet this branch of our sport should always demand respect and an acceptable degree of proficiency, to ideally ensure a clean kill. It therefore follows that any features built into a scope that aid the shooter, should obviously be welcome.

MTC market their Mamba range towards the hunter, yet they seem to show a little more foresight with their approach; offering their highly acclaimed SCB reticle as an option alongside other simpler designs such as the German#4.

One drawback for some has been the fact that, up until now, MTC’s Viper and Mamba ranges have only been available in 30mm body tube spec; but now with the brand new Mamba Lite (the subject of my test here), that is all set to change.

The Mamba Lite scopes come with a more traditional 1 inch body tube, which inevitably helps to reduce overall weight compared to the original range, trimming some 25% from the scales. This is fairly significant, and helps to avoid unbalancing a rifle combination with top-heavy glassware. The scope is finished in a practical silky non-glare matt black.

Light transmission is supposedly enhanced, by the use of higher grade lenses than before, whilst, according to the sales blurb, ‘all air-to-glass surfaces are ETE-Microlux coated’, which supposedly maximizes light transmission through the eye.  ‘ETE’ stands for edge to edge, and is used on the entire Mamba range, so the image should be distortion free across the lens. Low light performance is also on the spec list, so in theory this scope has a lot going for it.

I can honestly say that this test sample here, along with other Viper and Mamba’s I have viewed, has an impressively sharp image, with clarity comparable to several scopes way and above this price bracket.

My model here is the 3-12x44, with another Mamba Lite model available in a 4-16x44 spec.. Metal flip-up lens covers are incorporated which are always a nice touch, as well as being genuinely practical.

With the elevation screw turret cap removed, a low profile rotating bezel is exposed, which can be turned with the finger nail to indicate point zero where desired, once zeroing and familiarization with the trajectory is complete. The windage and elevation turrets themselves are finger-friendly, being easily adjusted directly, with no coin or tool required. On my test model, the clicks weren’t exactly overly positive, yet the accuracy as far as tracking a set amount: right, down, left, and back up to zero, all fell into place.

Side focusing/parallax adjustment is incorporated, with increments marketed on the knob, as follows: 10yds, 15, 25, then 50yds. After this, ranges are in 100yd increments, but given the overall spec and magnification, this facility is only intended as a rough guide, rather than for range-finding. Play to its strengths however, and this scope begins to shine.

The SCB reticle is excellent in use, and well worth some time invested in research. Doing your homework with this kind of scope can really pay dividends out in the field. For hunting purposes, the multi-stadia design may appear a little ‘busy’, but the plethora of aim points provides a firm reference against the average size of a rabbits head for example. Spend some time familiarizing yourself with some realistic images of vermin viewed within the reticle, and subsequent ‘bracketing’ of the real thing out in the field, will return an approximate range of the target.

With Gary and Sammie Cooper behind MTC Optics, it comes as no surprise that the SCB reticle was developed with the demands of Hunter Field Target shooting in mind; and for this discipline, it really does take some beating.

The beauty of this design is that half Mil Dots are utilized, meaning even more precise aim points are available for tiny kill areas, such as those dreaded 15mm targets, regularly found on an HFT course.

Over my test range, I turned the magnification to 10x (a popular choice for HFT), and on this setting, an example of the bracketing sees a 40mm kill fit between the first two lines away from the centre crosshair; and at 20yds, a 15mm kill will fit between centre and one of the outer lines. To say this is handy would be something of an understatement!

The test scope was sent through from Daystate, who are including a set of high quality Blue Print ring mounts with many of their initial orders, which does represent a saving over the normal retail price. These mounts incorporate double screw mounting, with washers, and felt reassuringly well made when locked into place for the purposes of the test - on a Daystate Huntsman incidentally.

Despite the increase in popularity of larger 30mm body tubes, it’s still easier to source 1inch mount designs. For that reason alone, I welcome these new ‘Lite’ models. Couple that with the significant weight loss, no obvious reduction in performance, and that excellent SCB reticle, and I think we have cause for a mini celebration.