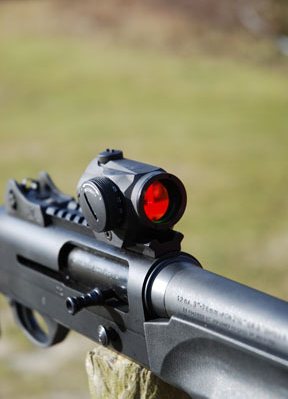 Though using red dot sights in the past, I have not found the need of one for many a year now. However, since my introduction to wild boar hunting, where ranges are close and the action fast, what they have to offer has started to interest me again. Likewise something of this nature also suits my straight-pull Saiga M4, as it’s better than the standard iron sights for what is a reasonably short range performer. So what better to start the relationship again with the market leader, Aim Point of Sweden, and what better to look at than their latest design - the aptly named Micro?

There are three models in the range T-1 (Tactical), H-1 (Hunting) and R-1 (Revolver); all are identical in terms of build with just a few differences that separate them. First the big picture; the specifications are compact and bijou at 2.4 X 1.6 X 1.4” and a mere three ounces in weight. The dot size is 4 MOA (minute of angle) for that read it subtends a tad over four inches at 100 yards and mounting is a 1” clamp that will fit a Picatinny or Weaver-type rail or similar. Though small the Micro is fully functional with separate elevation and windage turrets and a 12 or 13-position rheostat/battery housing (depending on model). Power is supplied by a single, 3-V, coin-type CR2032 Lithium battery, which has a quoted and astonishing run time of five years/50,000 hours of continuous operation from just one cell. I left it on all the time I had the T-1 and it was still bright red when I put it back in the box…

The most obvious difference is the stainless finish on the R-1, which is primarily designed for handgun competition shooting on Bianchi-type revolvers and pistols. This might also appeal to Action shooters for their 22 semi-autos and pistol-calibre lever-actions too. The H-1 is for hunting rifles and the T-1 aimed at the police and military, both these offer a matt black finish. Importers Edgar Brothers sent me the T-1, which is not the best choice for the sports shooters as the rheostat has six night vision compatible setting and only seven daylight ones. In reality this means that you can’t properly pick up the dot in daylight until position seven is selected. The H-1 and R-1 offer standard illumination and have what is called a super bright setting too.

What are clever are the turrets and adjusters, as Aim Point have kept them small in keeping with the design, but they still offer easy adjustment. On that point, click values are good at ½ @ 100 yards/13mm @ 100 metres. The tops of the turret caps have twin, raised pins in them, which engage with corresponding holes in the drum. So all you do is unscrew the cap and locate it (upside down) into the drum and use that as the adjuster. Inside is a sticker with an arrow and U/R to indicate direction. The clicks are positive and can be easily heard and felt too.

The rheostat drum sits on the right of the sight and linked rubber end caps are supplied to protect the lenses. I fitted the T-1 to a 12-gauge, Benelli M2 Practical semi-auto shotgun I have on test and proceeded to shoot it with slug and heavy buckshot loads, apparently with no ill effect. I also put it on my straight-pull AK74 (Saiga M4) in 7.62x39mm. At 100 yards this little dot really suited the AK and was able to keep on Fig 11-type targets out to 200 yards without too many problems.

The nice thing about the Micro is its lack of size and weight when compared to other makes and even other Aim Point models. As well as Practical/action type shooting the Micro would be great for driven game on any sort of suitable fullbore rifle. As Mauser are now in the process of making a Picatinny rail, QD base for their M 03 bolt-action the H-1 would be great on top of that for boar in a suitable calibre like 8.5x63mm.

If I had one niggle then it would be the lens covers, which are essential on any form of optic that expects hard/outdoor work. They slide on and off easy enough but could do with some form of cord to keep them attached to the sight so they don’t get lost.

As ever with quality European optics the price is not inconsiderable as the Micro (any flavour) will set you back the thick end of £550 and that is a lot of money for a short range none magnifying sight; no matter how you slice it! But if you have the need for what are probably the best built red dots in the world, in what is a most practical and compact design; then you know who to call…

We reckon:
Neat and efficient
Amazing battery life
Not cheap…