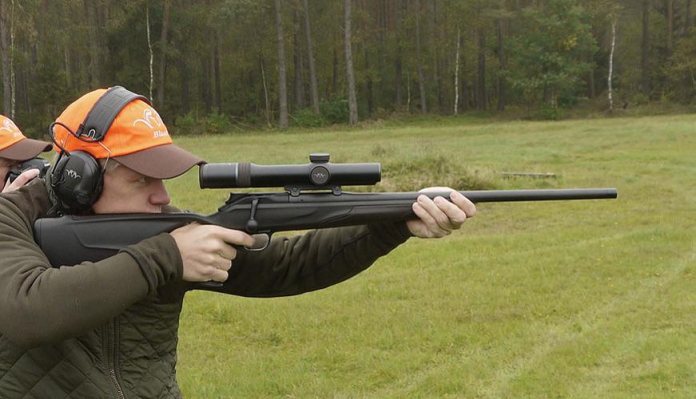 It was 20.00 hours with the light just going and there I was, peering through an optic on the Munster training area in Germany. The last time I did this, I was wearing black overalls and in a Scorpion CVRT light tank, attached to Second Royal Tank Regiment in 1979. However, this was 2017 and I was with a group of journalists as the guests of Blaser Jagdwaffen, to get the chance to look at of all things their new range of rifle scopes. Yes; the masters of the straight-pull rifle had taken the unprecedented step of adding a scope to their portfolio. Not I hasten to add; just by buying something in and badging it up, but designing it to compliment the Blaser product range of rifle, mount, ammunition, accessories and now the cherry on top a scope. Called the Infinity, I was intrigued!

Celebrity, I knew it

It was also a full circle for me too, as I flew into Hannover airport, as I had back in 1972 when I got my first Germany posting with 32 Heavy Regiment Royal Artillery in Hildesheim, just 50 klicks away. I always tell my family and friends that I’m a celebrity and I thought I was as I followed the Blaser driver out to the parking lot. My ride, a brand-new Range Rover Velar; sweet! Blaser do not do things by halves, as they had hired a fleet of them to ferry us about.

They’d also got access to the training area for the shooting day and night viewing demo, courtesy of Oberst (Colonel) Henning Kahlke, late of the then Bundeswehr. We must have eaten the same dirt in our time and we got on famously, but I could not stop clicking my heels together and coming to attention and nodding as we shook hands for the first time.

There’s little doubt that Blaser in the last 23-years has become a force to be reckoned with! Not a huge company compared with some of the larger manufacturers, however they’ve carved a unique niche in the firearms industry with their original R93 straight-pull design and the later and improved R8. Never cheap; reassuringly expensive might be a better term, they have a universal appeal, spanning your average shooter to those with expendable incomes. In my experience, near unique, as I have seen Blaser’s owned by ‘princes and paupers’ alike, so to speak, and with the same passion!

In recent years, we have also seen them do the whole life style thing, with a range of accessories that no selfrespecting Blaser owner can do without. Plus of course the mandatory QD scope mount, which adds another £400 to bottom line, but it’s something we Blaserites accept! Recently, they took the unexpected step of offering a range of binoculars, now they have added rifle scopes. Such an addition would complete the circle of their accessories that now includes moderators and bipods, so owners could have it all in-house. The binos were of good quality, but here the established brands already have the market place! But, a dedicated Blaser scope on your R8 or K95 is a big deal and one that could well appeal to owners.

It’s also a bit of a gamble, as they are unsurprisingly as expensive as their well-established competition; Swarovski, Zeiss etc and offer much the same thing. Which is to be expected, as the high-end scope build is pretty much set in stone; quality optics, ballistic turrets etc. I was surprised to discover they are only offered with a European rail mount. I was talking to Michael Lüke who along with Thomas Ortmeier are co-owners of the L&O Hunting Group to which Blaser belongs, intimated it was a bit of a gamble but exuded a confidence in the product that spoke of future success. And I now feel he is probably correct!

I should point out, that this is not a scope test but a first look at the Infinity range, as Blaser is launching them in the UK at the 2018 British Shooting Show. But I had an enjoyable and informative time shooting all three models and feel they are of exceptional quality and ability. So, Shooting Sports and Gun Mart readers have the exclusive, as I was the only Brit invited; due no doubt to my celebrity status! Doubtless the Infinity series has been in development for some time, as you don’t just pull something like this like a rabbit out of a hat! Blaser have got in some heavy hitters in terms of design and production, with the ‘legendary’ Hans Bender now (CEO) of German Sport Optics and Lothar Kölsch (optical designer) both being involved.

There are currently three models, all aimed at the hunter and all in the 1st focal plane (FFP). With two bullets drop compensation QDC (quick distance control) models. FFP makes a lot of sense, as no matter what magnification you are on the point of impact will not vary as to the magnification set! All scopes use a 34mm body tube and consist of a 1-7x28, 2.8- 20x50 and 4-20 x 58. All are illuminated and use a #4-type reticle, but the 50 and 58mm have the QDC elevation turret and side parallax. The 1-7 is the driven model (no QDC or parallax) but with enough magnification for decent mid-range performance too. The 2.8-20 is the mountain hunter and unsurprisingly the 4-20 the low light option, which seems to be a European thing!

Blaser have always had a good eye for design, as rifles like their R8 Professional Success attests to, as the individual components seem to organically blend together! They have carried this through with the Infinity, as it looks like part of the gun or vice versa, which adds to the appreciation.

Stand out features include a 90% light transmission figure at night (all models). The 1-7x28 has IVD (intelligent variable dot) which offers a large, illuminated dot from x1-4, ideal for close in, driven work, then from x5-7 it reduces to offer a finer aim point for longer ranges. Notable is the low height of the QDC turrets and the surprisingly compact size of these two models. Unsurprisingly the side focus and rheostat drums are combined, but unusually they are positioned on the right of the saddle with the windage turret on the left. I’m so used to parallax on the left that I could not see any real advantage, but as a right hander it does make laying in windage correction easier; jury’s still out on this; we shall see!

The parallax drum is locked for a 100m distance and is easily pulled out for longer range too. The QDC turret is also a bit different, as it has two initial settings; the first for a 100m zero point (point blank) and the second 4cms higher. You must lift the turret to unlock to use these two positions, but for more adjustment just turn it, sort of a double zero stop?

Unlike major optical companies that make scopes for all rifles, Blaser’s approach is currently dedicated to their QD base with European rail only, as there are no round bodied models. This does cut the field of interest down to Blaser owners only, which is obviously how they want it to be! But I’m sure a round-bodied Infinity, using standard 34mm rings, would attract some attention, from those who might see it as an interesting alternative to Zeiss, Swarovski etc? Like I said, a bit of a gamble maybe?

A hunting scope going up to x20 mag seems a bit over the top too, but the thinking is that you may never use x20 for the shot, but it’s great for observation, I tend to agree! Size and weight-wise the 2.8-20x50 and 4-20x58 don’t look or feel that big or different at 27.16oz/13.5” and 31.22oz/14.37” accordingly. The 1-7x28 is a sweet 22oz and 12.5” and does what it says on the tin! Blaser have also resurrected their IC control, which switches on the illumination as the de-cocker is operated. This as I discovered can be retro-fitted to existing rifles.

That evening, in last light and beyond, we went out onto the training area and tested the light transmission on the x20s. Both were very good, but the 58mm objective had the edge over the 50mm version. Viewing targets at 300m without light, if I’d been onto a fox I would have taken the shot with the 4-20x58! The next day, we were on the range and with Leopard II tanks roaring by I felt quite at home and had to concentrate on the job in hand and not drool over panzers!

We were set up on shooting benches out to 400m with a selection of paper and steel targets (400m). As the 11th man, I shot on my own and not in 2-man teams, Alexandrea Bauer; Blaser’s head of PR said was I alright on my own, I explained, this way I get a lot more trigger time; result? All the R8 Professional Success rifles were in 6.5x47 Lapua; so accurate and recoil-friendly! Nice, was the fact we had to zero the scopes (instructions provided) then check our drops out to 400m, then just play. Good to go hands on, as it gives a better appreciation of what’s happening and not just given a pre-zeroed rifle and told how good it is; kudos to Blaser!

Interestingly, once zeroed, my rifle was within 1-click up from the data on the instructions at all distances; not bad. I chose a 4-20x58 and though we had spotting scopes, the optical quality of the Infinity was such that I could easily see fall of shot and call groups out to 400m. I reckon I cut through a very enjoyable 100-rounds in a couple of hours and in that time gained an appreciation of the Infinity system.

We also tried some positional shooting on steel knock down pigs and foxes, which was more down to our shooting skills than scope quality. Then, it was onto the running boar; well, in this case strolling, as it was a tad slow! The 1-7x28 proved to be everything I had hoped, and the dual sized red dot was most practical, saying that the 2.8-20x50 when wound down to minimum proved well up to the task! I have just touched upon the Infinity series and have already placed my order for test units for proper evaluation; hopefully not long after the BSS.

Robert Sajitz (CEO) of UK importers/ distributors Blaser Sporting Ltd had this to say: “Infinity is yet another link in the chain of quality products that will provide our rifle customers with the option of a specific, Blaser-designed and produced range of telescopic sights, for all their hunting ambitions! Which compliments the comprehensive range of in-house, shooting accessories already available. I feel this is a bold and successful new direction, which has been conceived and driven by a company with a passion for hunting and their customers!”

This is a bold move on Blaser’s part and one at first, I was sceptical of, but now having spoken to them and used the Infinity optics, if not fully convinced, I am very much impressed by what’s on offer and what they are capable of. Price-wise they will not be for every Blaser owner, sadly I include myself in that group, but I feel the take up will be enough to prove their faith in taking the unprecedented step of a gun maker designing and manufacturing their own rifle scope range! Respect!