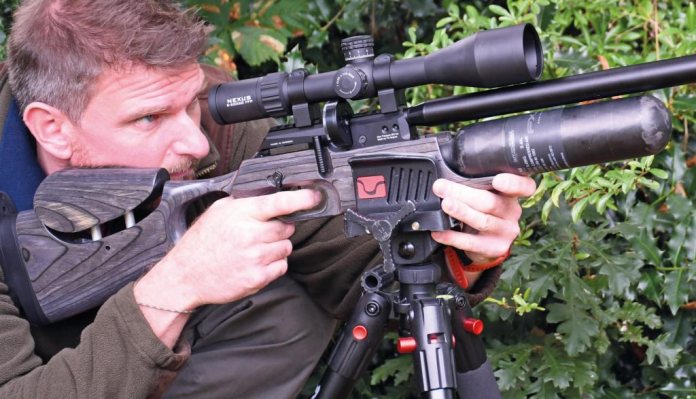 First focal plane (FFP) scopes aren’t new but the term is somewhat of a buzzword across multiple distance disciples. FFP offers simplicity and using the reticle to ‘measure’ for rangefinding, corrections or holdover aim points is thoroughly logical, without any possibility of making a mistake due to using the incorrect magnification setting, which is the drawback of the second focal plane (SFP) optical system.

Just to clarify, it’s quite easy to tell the difference between first and second focal plane. When you increase magnification on an FFP optic, the reticle, as well as the image, gets bigger, so both remain in perfect proportion. On an SFP scope, the reticle remains constant in size as the target gets larger, so it no longer portrays a truly proportionate image. Neither is better than the other and there are many scenarios where SFP holds advantages but critically, neither is totally lost in the other’s ‘territory’, just slightly less intuitive.

Element’s top of the range Nexus scope adopts the 5-20x magnification range, which is a great compromise, with the reticle size altering so that it’s never too small or too large. The 50mm objective lens combines a compact overall size with bright image quality from the front of the matte, hard anodised 30mm body tube. A neoprene cover is supplied, along with a 100mm sunshade, Allen keys, a clip-on lens cloth and an additional throw lever for the zoom control.

The spherical saddle supports elevation above, windage to the right and a left side parallax dial that’s engraved with white lettering from 10m to infinity, making the Nexus versatile for most rifle types and ranges. The outer rim offers illuminated reticle intensity settings from 1-10.

The elevation and windage turrets provide [email protected] clicks (0.1 MRAD) with a logical 100 clicks per turn. These clicks are segregated into 10 MRAD blocks on the 30mm diameter dial that shows machined knurling for grip. Once zeroed, the upper cap unscrews, allowing the engraved collar to lift off, be realigned and slotted back to mark the zero setting for your preferred distance. If you want to use the zero stop, then slacken the three recessed grub screws in the black collar to set it. A vernier scale is engraved under the upper dial to indicate its location within the overall mechanical travel. Windage is similarly adjusted, and the collar is marked left and right of centre for logical dialled corrections. Being FFP, all corrections correspond with the markings on the reticle for accurate aim off or dial off solutions. I was using the MRAD version of the scope but it’s also available in Minutes of Angle (MOA).

There’s 55mm of tube space in front and 60mm to the rear of the saddle, so plenty of room to mount scope rings and perfect your chosen position to suit the maximum 93mm eye relief, making this a versatile scope regardless of action size of gun type.

Moving rearward, the well-segmented zoom collar offers smooth motion without any internal backlash. A knurled throw lever is supplied. There is also a fast-focus eyepiece collar for correcting the dioptre to ensure a crisp reticle image. Once achieved, this was retained throughout the zoom range.

The reticle is well explained in the manual and not too ‘busy’ in the field of view, so unlikely to obscure the fall of shot. A small central floating dot is ideal for ultra-precise aiming, yet the larger hash markings, applied in 0.5 MRAD spacings with larger 2 MRAD stages and broader arms at the extremes, make for a great long-range aiming solution on larger targets. Element has deftly specified size and complexity in my opinion and with magnification at 20x, the exit pupil never becomes too critically inaccessible, still at a 2.5mm diameter. Being illuminated makes the ret easier to use in daylight at low mag in point and shoot or NV scenarios, yet at full magnification, when precision shooting, you can see a broad 19 MRAD field of view for target acquisition.

I fitted the scope to several rifles throughout the review period and found no canyons of capability. The eye box remained easily accessible through recoil and the image bright, with the clearly etched reticle always remaining in sharp focus. The clicks were crisp and with 100 per turn, they were mathematically intuitive when shooting longer distances. The eye relief was sufficient for recoil on mid-sized centrefires and the reliable, repetitive dialling capability allowed confident corrections using previously confirmed DOPE. The magnification control had solid stops at either end of the travel, with no internal mechanical noise evident.

The performance in poor light will always be a function of maximum magnification and objective lens size, so any high mag 50mm objective scope is never going to be the ultimate last light hunting optic. The Nexus’ image degradation was linear, without distinguishable steps through image intensity as the light faded. The colour rendition was well- balanced and the sunshade was useful. A neoprene stretch cover is supplied to protect the scope and the guns in your cabinet.

Optically, Element’s three scope lines seem to have been well directed into their relevant price points. It’s good to see the brighter image on this top of the range Nexus and quite specifically, improved colour resolution and precise detail definition with backlash-free parallax control enabled with the left side dial. The image cleanly snaps in and out of focus in reasonable correlation with the engraved distance markings, which is a pleasant factor. It’s a scope I’m happy using and justifies its top position over the Helix and Titan variants. The instruction manual is clear with decent page sizes and helps less-experienced shooters understand more about longer range correction. When it comes to turret setup, Element does not skimp on detail.