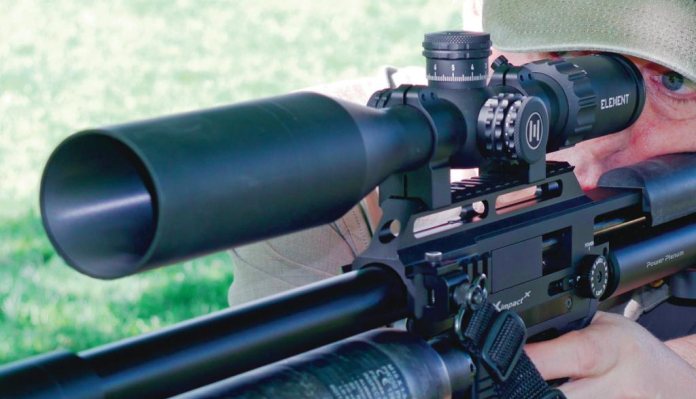 Element Optics is the brainchild of YouTube airgun hunting supremo Matt Dubber (Air Arms Hunting SA). He has used a wide variety of scopes, pushed them to their limits, and knows precisely what he wants from an optic. As a result, most of his rifles wear a Nightforce! He also knows that not everyone has that much cash to spend, so he decided to create his own line of affordable riflescopes, offering shooters everything he demands from a scope; clarity, precision, resilience, great reticles, ease of use and a solid guarantee. He also wanted each model to offer something different whilst maintaining a distinctive brand identity. In short, he wasn’t shy about setting the bar high!

The brand has debuted with three models: the Helix 6-24x50, Titan 5-25x56, and Nexus 5-20x50. Aside from the 34mm main body tube of the Titan, the most obvious technical difference is the reticle. The entry-level Helix uses a non-illuminated second focal plane (SFP) ret which means that it stays the same size throughout the magnification range but the substension values only apply at a specific magnification. The upper-tier Titan and Nexus models use illuminated, first focal plane (FFP) rets so that the values stay the same at any magnification. They include a choice of simpler or more complex stadiametric designs and all the models are available in either minute of angle (MOA) or milliradian (MRAD/Mils) format.

The Sportsman Gun Centre supplied the flagship Nexus model and a set of medium Warne mounts for the test. Opening the box showed a sunshade, detachable zoom lever, cleaning cloth pouch and a branded neoprene scope cover. There was also a fully-illustrated instruction booklet. Expertly penned by Jules Whicker checks out the Nexus, a premium scope from

Mr Dubber himself. It should enable even an inexperienced user to make the most of everything this sophisticated optic has to offer.

On first inspection, the regular controls including; the fast-focus dioptre ring, zoom ring, elevation, windage, side-parallax and illumination dials all turn with the correct degree of resistance for their function. This makes the desired setting easy to reach, hard to overshoot, and resistant to accidental manipulation. The turret dimensions are well-judged, combining a modest profile with a graspable diameter, clear markings, and room for trajectory stickers. Also nice are the taper-free eyepiece and objective bell, which offer a perfect fit for both front and rear-mounted night-vision devices.

I tested the scope primarily on a FAC-rated FX Impact pre-charged airgun, so didn’t begin to need the 77-93mm of eye-relief, but the scope is also very much designed with centrefire rifles in mind. Airgunners, meanwhile, will appreciate the parallax adjustment which works from 10m-∞

Both experienced shots, Matt and Ted were responsible for the design of the reticles. Matt for the MRAD All Purpose (APR) and Ted the MOA Expedited Hold (EHR) design. Each one is available with a choice of C (“clean”) and D (“dirty”) layouts.

The key issue with any FFP reticle is whether it will be too fine to be easily visible at low power. To my eye, the centre of the MOA EHR design is more intuitive to find at 5x magnification, due to having bolder perimeter lines at the 6 and 12 o’clock positions. The latter is shortened to keep the upper half of the image as clear as possible for observation and target identification.

By contrast, the MRAD APR only has the bolder perimeter lines at 3 and 9 o’clock to give an even purer view of the fine holdover points. If you do need to shoot fast on low power, however, there’s a simple way to make the reticle more visible: light it up! Thanks to the off-positions between each brightness intensity setting, a quick twist of the dial will take you straight from 0-11, for positive targeting even in bright daylight.

On balance, I think the EHR-1D design would be the best fit for most of the shooting I do, but I stopped using MOA optics a decade ago and won’t go back. As a result I opted for the MRAD APR design in its ‘dirty’ format, which provides a sophisticated but usable Christmas-tree/ ladder below the centre.

The “All Purpose” tag is well-deserved, too, as this is a reticle that will also suit long-range centrefire shooters extremely well in both rapid-engagement and precision use. There is a significant amount of visible holdover available, with 28 MRAD below centre, 6 above, and 15 either side.

The elevation turret offers 23.2 MRAD of vertical adjustment, showing 10 per rotation in 0.1 clicks and a zero-stop function to make returning to zero much easier. There is 14.5 MRAD of windage which is marked up with the direction as “1L” and “1R” etc to help avoid mistakes. There are also distinct turnindicator lines under both turrets, to help keep track of which rotation you are on.

The internal mechanics of the Nexus are also impressive with tracking just as it should be. No matter how many corrections were made, when I returned the dials to zero, the shots were back where they started. Calibration was spot-on, too. Dial in 1 MRAD and the group centre moves 50mm at 50m. Even if you prefer to hold over rather than to dial in your corrections, this kind of dependable precision makes zeroing a breeze.

Optical performance didn’t disappoint. The eyebox was very forgiving at lower magnifications and not overly restrictive when using the higher settings. The parallax adjustment, meanwhile, is very precise, so will suit airgunners who like to use it as a ranging tool. I found the dioptre ring had to be set just-so, too.

Basically, the Nexus really lets you know when anything is out of focus and that’s a sign of just how good the glass is. The only issue came when testing the image against treetops backlit by low sunlight, which produced a distinct yellow fringe around the branches. An identical effect was observed in a Nightforce NX8, so no shame there!

Overall, I’m massively impressed with what Element has achieved straight out of the blocks. It isn’t cheap at £1,324 but I’ve yet to see a more accomplished all-round hunting/tactical/ precision scope for the money, let alone one with a no-quibble lifetime warranty. It’s well worth a look.