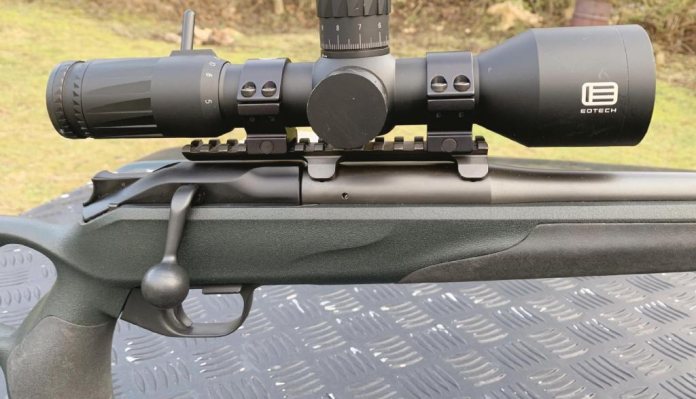 EOTech is owned by L-3, which is one of the largest defence companies in the U.S. They are best known for their battle-proven, holographic sighting systems, which they supply to law enforcement and commercial markets around the world. They also produce tactical lasers, illuminators, thermal imaging equipment and now a range of precision rifle scopes, suiting a variety of applications. Called Vudu, they are designed to meet the needs of serious shooters and includes the following options 1-6x24, 2.5-10x44, 3.5-18x50, 8-32x50 and the 5-25x50 featured.

The scope is manufactured in Japan and comes with a standard matt black finish. It is built around a 34mm main body tube and has a magnification range of 5-25x. It includes a 50mm objective and the XC High Density Glass is of a good standard, when compared to other optics in the same price range. EOTech have included their own style of illumination control unit, which is mounted on the parallax turret. It provides multiple brightness settings and is controlled using rubber on/off and +/- buttons. It is powered by a single CR2032 battery, which provides up to 500hrs of run-time and is located under a screw-off cover on the drum, which can be opened by hand. There is also an auto shut-off feature, which activates after two 2-hours. The parallax turret displays clear, regular markings from 45m-∞.

The rear assembly features a lockable, fast-focus ring but does not include a zoom ring. Instead, the entire eyepiece rotates when adjusting the magnification. It shows regular markings for the mag, with a raised fin at the 16x position. Here, a removable, threaded, 2.5cm long throw lever can be attached for easier adjustment. A nice touch.

The elevation turret is the star of the show, it is well proportioned, standing approximately 3cm above the main body and 3.5cm in diameter. It is an exposed, push-to-lock, pull-to-unlock tactical design. Click values were 0.1 [email protected], with markings every 10 clicks/1 Mil, which is standard these days. There were a total of 100 clicks/10 Mils of adjustment per rotation. The entire adjustment range showed a total of 340 clicks/34 Mils/3.4 rotations, which is an impressive amount.

The scope includes EOTech’s EZ Chek zero stop, which to its credit, made setting it up simple. Once the correct point of impact has been achieved, simply undo the smaller knurled drum at the top of the turret and remove it. Lift off the turret sleeve, exposing a central pillar. Loosen the three Allen screws, and reposition the zero-stop ring as per the instructions. Then replace the turret sleeve at the zero mark and re-attach the drum. The zero and its stop are now set, job done!

They have made the smart move of including a clear and effective rotation indicator. After a full turn, it rises from the top of the turret, displaying the appropriate number of lines, dependent on the number of completed turns, so that the user does not get lost. The method used to zero the scope also ensures that the indicator line is precisely positioned, making it impossible to misread.

The windage turret is a lower profile, capped design and measures 2.5cm high and 3.5cm in diameter. With the cap off, it shows the same click values marked every 10 clicks/1 Mil with 0-5 Mils shown in each direction, which is always nice to see. They have included rotation markings and indicated direction of turn. It provided a total of 270 clicks/27 Mils/2.7 rotations, which is again, an impressive amount.

Zeroing is still easy, but slightly different. Simply undo the turret using the coin slot, remove the sleeve, replace at the zero mark and do it back up. Blissfully simple.

The 5-25x50 is available with either their Horus H59 (special order) or MD3 reticle (featured), both are in the First Focal Plain (FFP), which means that the subtensions remain correct throughout the entire magnification range. At the centre is a small and precise 0.055 Mil diameter floating dot, which can be illuminated. At 12 O’clock, the design shows a short 1 Mil vertical axis, which helps maximise visibility in the top half of field of view (FOV). The horizontal axis incorporates 5 Mil markings either side with smaller 0.2 Mil hashes in between. The 6 O’clock vertical axis is similar, but shows a total of 12 Mils, with the 2,4,6, and 8 marks including an illuminated dot.

This Vudu is up against some stiff competition in this price bracket, however it does have some strong and desirable features. It’s a compact optic, making it an ideal candidate for night vision and thermal attachments. However, as a result, it is important to consider mounting options, as there is less room for rings. It provides plenty of adjustment, while offering clear, tactile clicks, with 10 Mils per rotation. I really liked the slotted control surfaces, found all over the scope. The MD3 reticle is well balanced, offering precision, while also being clear and simple to use. The illumination, was a little bit weak, only being of use in very low light but still had it uses. Overall, a well thought out, solid performer that is well worth a look.

There is the opportunity to WIN an EOTech Vudu Precision Rifle Scope at the British Shooting Show 2020! Three lucky winners will be selected to win one of the following scopes:

To enter the competition simply head over to this link online -https://forms.gle/ qkWVgemGdkoH1vMs7

On each day of the show, the chosen prize winner will be announced at 14.00 on our Facebook, Instagram and Twitter Feeds and be emailed directly. If you are attending, you will be more than welcome to collect your prize in person, but please make sure that you have your ID to hand, as this will be required in order to claim your prize. The competition closes: 15th February at 14:00