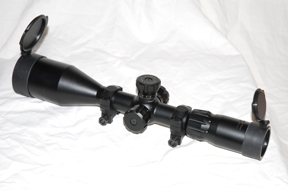 Last year Falcon Optic’s new 10x42 Menace rather impressed me. Good glass and build with useful reticules and all at silly money; I have been using this model since then and not found it wanting. Speaking to Falcon indicated that they were going to expand the range with - 7.5x50, 1.5-5x30 (coming soon), and 4-14 x 42 and 4.5-18 x 56. This last being the unit on test.

The Menace range is more aimed at the precision shooter, but as I found with the 10x42 it holds up well in the field too. The build offers a one-piece/30mm body tube, though the objective is separate/screwed on, as it allows Falcon to use the basic chassis for all models in the range. Turrets are un-capped, target-types, which show large adjuster knobs and are graduated ¼ MOA @ 100 yards. The eyepiece bell offers a fast focus system, the magnification ring is long and slotted and on the left of the saddle is a side focus/parallax drum. This is marked – 10, 15, 20, 25, 30, 50, 75, 100, 300, 500, 750, 1000 and ∞.

Lenses are multi-coated and light transmission is quoted at 92%. This model offers what Falcon calls an Enhanced Skeleton Long Range Mil-Dot set in the 2nd focal plane. This means the three, thick (outer) arms at 3, 9 and 12 o’clock are just outlines. The 6 o’clock line is thin right down to the edge and offers seven dots, with five on the other three, inner arms. These are sub divided in ½-Mil with hash marks though the main subtensions use the standard round dot.

Turrets are divided into 15 main divisions with four clicks each, giving a total movement for one revolution of 15”. Realistically you get five full turns from top to bottom, which means 75” (6.25 ft) @ 100 yards. Typically the stationary section of the drum is marked with one vertical and seven horizontal lines to allow you to know where you are in elevation. Windage is identical in what it offers though the turret is marked 0 -7 in either direction, which is useful when laying in lateral corrections.

Turrets are secured by a single, central Allen screw, which allows them to be slipped to 0 after zeroing. They clicked round easily enough and gave a good noise and feel you could easily count.

In use the 4.5-18 proved as good as the 10x42 as to view and optical clarity. In terms of controls I found the tension of the magnification ring and parallax drum to be just about right, being firm but smooth. If anything elevation and windage were a tad softer when compared to the 10x42.

Wisely Falcon have marked the position for milling targets on the magnification ring in red, which is at X10, so no problems about being on the correct power for the job. On that point and though liking Mil-Dot with ½-Mil subtensions, as it offers far greater precision, I found the combination of dots and hash marks a bit busy for my eyes. On the plus side it allows you to differentiate easily between 1 and ½-Mil, but it’s all a bit close together. I think short and long hash marks would be more practical, which is available in Falcon’s MP20 pattern and a design I much prefer. Best of all for me is the long, seven Mil-Dot 6-o’clock arm, which really allows you precise hold over calculation/use at longer ranges.

Like all of the Menace range the 4.5-18x56 comes with flip-up lens caps and a sun shade and for what you are getting is a well built, good quality and cost effective package. Overall I was most impressed by what’s on offer.