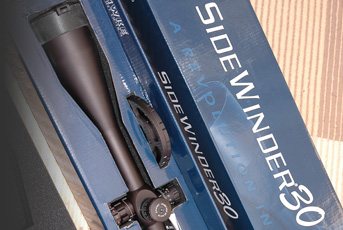 Hawke Sport Optics, marketed through Deben Group Industries, are now a well established name in the shooting world, and the arrival of any new model is always of interest. So with the new Hawke Sidewinder range of scopes having just been signed off by the development team, I was itching to take a closer look

Eight new ‘Sidewinder 30’ models are available, with the ‘30’ denoting the body tube diameter in mm. Basically four variable magnification specs are supplied with either a Mil Dot reticle, or SR design.

Given the specification, this sidewinder seems particularly suitable for air rifle Field Target shooting. With stiff competition out there, the Sidewinder package is fairly generous too, and whilst you’ll have to source you’re own mounts, there are a few goodies thrown in. Whilst many FT shooters now use up to 50x magnification scopes, 32x is still common, and plenty to optimise the parallax range finding facility

These new Sidewinders come complete with handy accessories including sunshade, large sidewheel, range marker ring and flip-up lens covers. Personally I’ve never found sunshades at the front make much difference, but it certainly looks imposing when screwed in place, and the lens covers are an easy push fit when transferred.

Chunky target turrets come fitted as standard, and with the popular push-pull lockable design (i.e. pull turret up until it clicks, make the adjustment, then snap it closed again), there’s no need to stop the action to find a screwdriver/coin. The downside is that the turrets can be more easily knocked off the desired setting.

Clicks are 1/4inch at100yds, with a full rotation of the turret equating to 64 clicks, or 4 inches at 25yds. Three revolutions on each turret are possible so plenty of adjustment exists here.

With the Sidewinder zeroed, I set about confirming the integrity of the adjustments, by adjusting a set amount ‘right’, then ‘down’, ‘left’ then ‘up’; firing a couple of shots after each adjustment. With the shots forming a square and the final shots re-confirming zero, the 1/4inch click system was clearly working.

The obvious third turret on the left side, is the side parallax range adjuster. For those unfamiliar with this feature, the turret is turned until the target becomes clear. The range can then be simply read from the dial. In theory, range estimation becomes more accurate as the arc between marked ranges is expanded via a larger wheel - hence its inclusion in the package.

FT shooters are a trendy bunch, and few would be seen out these days without the side parallax adjustment wheel. It’s fairly common for competitors to re-label the wheel with more precise range marks, and my test scope was a case in point.

I found the pre-set manufacturers range markings, printed on the turret, to be out by around 10yds over 55yds, i.e. a target at 55yds read as 45. This in itself is not a problem, since, as I say, the wheel can be carefully re-labelled.

The key with this style of scope (especially if it’s being utilized for FT), is repeatability of the range finding, and in this aspect, the Sidewinder worked a treat. My marks for 45, 50, and 55yds, came in consistently as known targets were read, proving that with some judicious research, this scope could be very useful indeed. It’s at the upper FT target range where minor mis-readings can make all the difference, after all. A range indicator is even included, which is a split ring, clamped over the scope body (very fiddly). It should then point to the range to be read from the wheel, although the pointer needs to extend further out in my opinion.

Image wise, set on 32x, the Sidewinder compared quite favourably to my trusty old Burris Signature - an identically spec’d (8-32X) scope as it happened. A good crisp picture was on offer, but I would still recommend any scope viewed on this relatively high mag to be fitted with a rubber shroud/ lens enhancer at the ocular lens, to eliminate back light and sharpen the image.

Wind the mag down to 8x, set the parallax to a mid point, and this scope is even usable at a push for HFT.

To get this far and fail to elaborate upon the SR12IR reticle says a lot for the features on offer here, but that reticle, designed by former FT World Champion, Nick Jenkinson, is a confidence boost in itself.

Comprising of a central Christmas tree design, with each stadia line ending in precise open dots, the competitor has an abundance of information at his fingertips; and the wherewithal to allow for progressive windage, and range estimation.

This Sidewinder is ‘second focal plane’; that is to say that the reticle stays the same size as the magnification is increased. SR reticles are designed to have pre-determined trajectory markers when shot on their master mag. i.e. the SR12 is designed to be shot at ‘12’ mag, with a particular pellet. However, this is just a guide, and nothing beats doing your own homework. Nick’s design takes some beating, and offers a plethora of aim points.

The ‘IR’ in the spec stands for Illuminated Reticle, and these Sidewinder models offer not only 5 power increments with regards to brightness, but a choice of red or green illumination. Free dedicated software is available on-line via Hawke’s Ballistic Reticle Calculator to predetermine aim points, so hours of fun and research awaits with the reticle alone!

At £299, this Sidewinder is very competitively priced, and well worth considering, especially as an entry into FT for a modest outlay.

Oh… and my only gripe?...  It appeared to have the wrong instruction book!