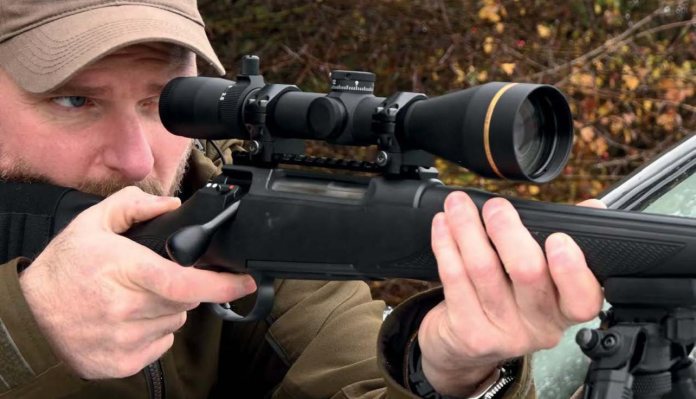 The Leupold VX-3 HD range of pure hunting optics brings premium lenses to the market without excessive magnification, target functionality or unrequired electronics. A 3x erector tube may sound modest, but for a specific price, do you want to pay for an extreme magnification range you will never need, or instead, a modest, lightweight layout that will complement a similar, tough, reliable hunting rifle? At 3.5x magnification, you have a broad field of view and the brightest, broadest light spectrum picture for woodland stalking. When wound up to 10x, for longer shots, magnification improves accuracy with greater aim point definition. Finally, the simple CDS turret improves precision without the need for point-blank range zeros and/or holdover error. A 30mm tube is used to house the mechanics and optics, with a 50mm objective lens directing light through the internal packages to the rear ocular, which features a knurled fast-focus eyepiece for crisp reticle adjustment. Extending rubber lens caps are supplied to stretch over the scope and protect the multi-coated lenses.

This scope’s parallax is fixed at 150 yards, which may sound somewhat limited, but remember just how many deer were shot before parallax became a well-known marketing factor, and probably caused more misses than hits. Below 12x magnification, it’s almost impossible to notice parallax error and although it is still technically present, it’s rarely of issue unless trying to shoot with high magnification at significantly shorter distances. In this situation, simply reduce the magnification of the image slightly, it may be slightly unfocussed, but this won’t impede you when zeroing or hunting.

Getting the correct eye relief is easy, as there is 45mm of clear tube space in front of the saddle and 65mm behind it. This scope does vary through the magnification range from high to low mag, but again, chances are you will be more likely addressing the rifle upright on low mag, and more likely prone at high magnification, which almost cancels it out anyway. A throw lever is included on the magnification collar to speed up mag changes, and the fast-focus eyepiece does not stand proud of the parallel, 41.4mm diameter ocular body, which can therefore easily accept clamped-on accessories.

All that said, the fact the scope has just a 3x erector tube makes the eye box itself very forgiving. I hardly noticed the eye-relief drift on a sporting rifle whose stock ergonomics allow for more positional variety than a precision rifle with a tall comb and critical head positioning.

The scope is available in MOA (1/4 MOA clicks) or MRAD (1cm @100m clicks). Again, the modest magnification range and erector tube bring the benefit of a large mechanical range for zeroing setup on your rifle, before even considering the Leupold CDS-ZL turret system.

Primary setup is performed with the dial and once ‘zeroed’, Allen screws allow it to be slackened off to rotate freely in order to visually mark the zero position. The small silver button is pressed to unlock the dial, which can then be rotated anti-clockwise for longer range shots.

After you take the shot, spin the dial back clockwise to zero and it clicks softly to lock back in the primary zero position. It’s one of the simplest, ergonomically viable systems on the market.

CDS is an acronym for Custom Dial System and if you wish, you can have a custom dial laser engraved at the Leupold factory to match the exact ballistics of your ammunition and rifle. However, I would stress that is within a fixed atmospheric parameter range that not all shooters will remain within. It also relies on you being able to continue using the exact same ammunition. I like to go out, prove my ballistics and make notes, but that’s just my personal preference.

The right-side finger-adjustable windage dial lays under a protective cap and once set, is generally left alone. The left-side turret shows a battery cap for the illuminated reticle’s dot, which is initiated and controlled through its six intensity settings with the central button. This is Leupold’s Firedot system, and although there isn’t an auto-off after time delay, if switched off and back on, it returns to your previously chosen intensity level. This red dot sits centrally within what is an otherwise conventionally etched Duplex reticle pattern, with no cluttered additional aiming marks to complicate your field of view. Regardless of the light conditions, the red dot remains flat and crisply focused within a similarly clear, flat-focussed field of view from edge to edge.

Leupold has made a fuss-free optical tool to do a job without ostentatious functionality. The image quality is bright and clear with matched lenses throughout, as well as Leupold’s own lens coatings to provide excellent colour, contrast and resolution. The tube is anodised matte across the entire body, with external knurling that I know from long experience with many Leupold optics I have owned, will withstand all but the most careless damage. Leupold has long offered a secure warranty that reflects the enormous US home market’s requirements - a hunting culture the company derive from and continues to serve. This scope epitomises the K.I.S.S. concept.