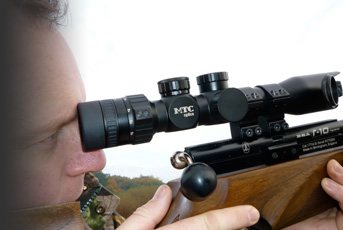 I first encountered the Viper Connect on MTC’s stand at the 2009 Midland Game Fair, and at that time it was at the prototype stage. It was there again at the September 2010 event, but now the spec was sorted and I certainly liked what I saw. The company’s MD, Sammie Cooper recently sent an example for evaluation and I was impressed as soon as I opened the parcel. I’ve never said ‘blimey’ to myself when seeing a scope box before (I know, I’m sad!), so Sammie and her husband Gary have certainly come up with an attractive bit of packaging. I know it’ll get put to one side once the scope is mounted on a rifle, but it definitely adds to the overall feel of quality of the product and it’ll certainly look good on gun shop shelves - not that these bits of glassware will be staying there long…

The Viper Connect has it’s roots in the old Connect 01 that was first marketed by Soviet Bazaar and later by MTC, in that it’s an optic with virtually non existent eye relief, i.e. you put your eye right up to the ocular bell. Do this with a conventional scope and all you’ll see is a tiny view of the target. Conventional scopes have an eye relief of a couple of inches for a very good reason; if the eye were too close to the back of the scope on something like a full bore rifle, a rather nasty cut eyebrow would be caused by the rifle’s recoil. ‘Scope bite’ isn’t pretty and must be rather painful, both to the face and the shooter’s dignity. The instruction booklet even goes so far as to tell you to book a taxi to your local hospital if you decide to mount this scope on a heavily-recoiling rifle… wise words indeed!

This new offering from MTC builds upon the old concept, but it’s a much improved product all round, and is the first optic built to MTC’s specification from the ground up. When compared to a ‘normal’ scope it’s fairly conventional looking, but manages to look rather unusual at the same time, due to the twin saddle design – but more about that later.

Starting at the front, there’s a 32mm objective lens, protected by a neat swing out cover and a small in-built sunshade. There’s then a gap for scope mounts on the 30mm one piece tube; behind this, in the front saddle, are the elevation and windage turret that have ¼” clicks, along with the parallax adjuster on the left hand side.

The second saddle is for the reticule illumination control, with an 11 position rotary dial on top and a rubber covered ON/OFF push button on the left. Just behind this is the magnification dial that rotates from 3x to 12x power. There’s a ‘notch’ as it passes the 10-power setting, which is very handy if you intend to use the scope ‘tactically’. The reticule can be focused to the shooter’s eye by the fast focus dial and to the rear of this is a screw out extension like those found on some binoculars. The transit box comes with an optional rubber bellows eyecup that can be fitted to stop any unwanted light spoiling the image; these are very handy, especially on bright days or simply when the sun is low in the sky.

Overall build quality is very good indeed, with precisely machined components and a nice thick, even anodising to the exterior. All lenses are multi-coated for an enhanced image and the tube is sealed against moisture ingress and filled with nitrogen to prevent fogging. The glass-etched reticule is the AMD designed by MTC and is a variation on the Mil Dot style, although there’s only really the vertical line in evidence with a series of lines and dots. In reality, this is all you need, as windage correction can be judged by eye. The centre cross can be illuminated via the dial and ON/OFF button mentioned before. The compact design of the Connect makes it 11 ½” long, with a weight of 600g; an MTC Viper 4-16 X 50 for instance is 15” long and weighs 750g.

Mounting Ussues? No Not Really

As the Connect has to be mounted nearer the user’s eye than a conventional optic, it’s necessary to use a slightly different technique to take it back nearer the rifle’s cheekpiece. It’s therefore not possible to get mounts either side of the saddles, so the mounts have to clamp on just the front portion of the tube. This isn’t a fault with the design however, but a result of the limited eye relief. It may look a little odd, looking as though there’s not enough supporting the body, but as it’s a very rigid, one-piece unit, there’s no danger of it drooping or bending. I used two 30mm Sportsmatch mounts to clamp the Connect to a BSA R10 air rifle and had no problems at all despite continued trips to the range and farm. I’ve not encountered any loss of zero, so there’s nothing to worry about on that score. It just goes to show that modern manufacturing methods are light years from the way optics used to be constructed.

The huge field of view that’s offered by this cracking little scope is so vast that it’s a bit like looking through a round window with a crosshair painted on it! On 3x power it feels like you can see the whole field, not just the portion you’re shooting on, and even on 12x mag it’s still impressive. There are obviously other ‘wide-angle’ scopes available, but nothing quite like this. In tests I found a conventional scope set on 12x power gave a field of view of around 32” at 25 yards; the Connect managed 56”, which is quite remarkable. This enhanced view of the target is a real bonus in the field, as you get a much better view of the area around your quarry, with less of a ‘tunnel vision’ effect.

Impressed? You Will Be

The 3-12 X 32 Viper Connect is quite clearly an impressive unit, but seeing as it’s a short eye relief design you might think it’s quite a niche product, limited to non-recoiling pre charged pneumatic air rifles. However, anyone shooting a spring powered air rifle, a .22 rimfire or 17 HMR can also use one of these scopes, so that niche isn’t so small after all. I fitted the Connect to my modified Weihrauch HW35 springer and shot it with no problems at all; fair enough its tuned action makes in quite a smooth rifle to shoot, but I can’t imagine it being a problem using one of these scopes on a livelier air rifle. The real test came when I mounted it on my Rhineland Arms R22 .22 rimfire semi auto. Using Sportsmatch Weaver-style mounts it went on perfectly, using two mounts again on the front portion of the scope’s tube. Recoil wasn’t a problem for me, or others that tried the setup and MTC’s new offering.

MTC deserve a pat on the back for developing this innovative new scope and I’ve got a feeling there’s going to be a huge demand for it. The best thing to do is get down to a gunshop that’s selling these classy bits of glassware and see for yourself.  Price is £249.95 and for your nearest stockist, go to the MTC website at www.mtcoptics.co.uk or give MTC a call on tel. 01380 859 572