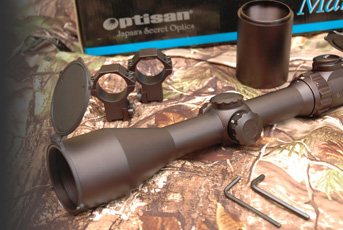 MTC Optics have certainly done their homework. Having shoe-horned themselves into the market place a few years back, the brand name appears to have gone from strength to strength.

Canvassing shooters as to preferred features and product desirability always makes sense, and with the dynamic partnership of Sammie and Gary Cooper behind the venture - both keen shooters themselves - a ‘hands on’ approach has seen the products slowly evolve to meet demand.

On test here is the Mamba 2.5-10x50, and with the new specification based around the familiar Mamba ‘chassis’, we’re surely off to a good start.

For those unfamiliar with this companies marketing strategy, the Mamba range of scopes sits neatly between the range-topping Viper competition line-up, and the budget models bearing the Cobra name.

With Mamba aimed fairly and squarely at the hunting fraternity, sleek body lines, and a hunting reticle come as standard.

More and more scopes these days are being produced with 30mm body tubes, and the increased light transmission afforded, is an obvious bonus; begging the question, why it’s taken so long for the larger tubes to take off. Of course the overall weight of the unit increases, but a brighter sight picture is normally the end result. The Mamba utilizes the 30mm option, hence the chunky, purposeful profile.

All MTC scopes are made by Optisan, and whilst they are Chinese in origin, the optical quality really is rather impressive - indeed to such an extent, that it has you shaking your head as to just how the manufacturers can produce such a scope for the price.

Add to this the MTC party piece of an all-inclusive package – this Mamba comes complete with flip-up metal lens covers,  screw fit sunshade, battery and it’s very own set of dedicated 30mm split-ring scope mounts - and the astonishment continues.

So let’s highlight those features and see just what you get for the money.

Side Focus and Finger Friendly Turrets

This Mamba’s no lightweight for a start, with the steel construction feeling solid and robust. Indeed there’s enough mass here to alter the balance of an ultra lightweight rifle, so a point to bear in mind.

Three turrets indicate a side focussing mechanism, with the small knob on the left hand side being the parallax adjuster. Ranges are clearly marked in white figures, with the minimum focussing distance down to ten yards. MTC provide push-on extender wheels (popular on the FT circuit) with some of their models, but given this scopes intended hunting duties, the wheel is dispensed with here. So with the Mamba models Optisan use traditional screw cap, low profile turrets, as opposed to the push-pull target turrets on the Viper range. Unscrew the caps, and the raised, finger-friendly adjusters can be twisted to suit, without the need for a screwdriver or coin - just as it should be!

The usual turret test was carried out by dialling the scope 50 clicks to the right, then down, left, and finally up - all by the same amount. In theory the shots should complete the box pattern and return to zero; and sure enough, the test model demonstrated that all was indeed well with the internal mechanism.

Consider for a moment, what’s required in a hunting scope (the intended market for the Mamba spec) and the new model starts to make sense. Adjustable magnification comes down to a highly usable 2.5x, meaning if a bunny presents itself at an absurdly close range, clarity can be near perfect, regardless of the parallax setting. In practise, with the scope set on this lowest mag, the image is near clear at just a few yards, and better than the marked minimum of 10yds. The lower the mag, again, the brighter the image, so 2.5-10x adds real versatility where it matters. Magnification is adjusted in the usual way via the reassuringly firm collar, just forward of the ocular lens.

Reticle wise, a choice exists between the SCB (Small Calibre Ballistic) design (see MTC Optics’ website) and the simpler, yet highly useful, German 4a layout, as per my test model. Popular with fox and deer shooters, this design sees three thick posts (left side, right side, and lower upright, all come together, just stopping short of the floating central dot. The precise nature of the fine dot and central area, lends this scope a classy feel, and since the gaps between dot and posts are nicely proportional to airgun-sized targets, this is a particularly usable and appealing design in my book.

The floating dot means that more of the target is visible nearer to the impact point, and, coupled with the sheer clarity of the glass, is superb in use. ‘ETE (Edge to Edge) Microlux lens coating’, is the sales blurb from MTC, but whatever it is, it seems to work!

As if that wasn’t pleasing enough, the central floating dot can be illuminated at the flick of a button. Red illumination comes in seven stages via rheostat control, and whilst the brightness levels are subtle, it’s a neat feature that can add a further dimension in poor light. Just remember to switch it off properly, since ‘off’ is just a stage on the +/- toggle switch. Two CR2032 3v lithium batteries are supplied with this scope, with the spare being neatly contained within the right hand windage turret - what’s known as a nice touch I believe!

Set the mag to 10x, and this Mamba doubles up as a half decent model for HFT. MTC won’t thank me for saying so, since they have dedicated Viper models to mop up this sector of the market; yet that reticle does it for me, and is well worth a look.

This really is a nice piece of glassware, and with an asking price of £189, I’d say the Mamba is aggressively competitive, and takes some beating, alongside like-for-like rivals.