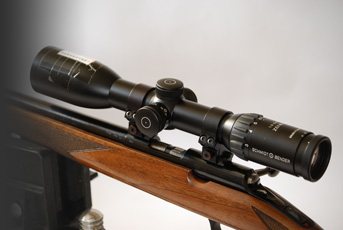 This is my fourth look at S&B optics this year and in that time I have plumbed the various options of their 1st focal plane optical system. Now it’s the turn of another Zenith, but in what I would term a driven or dangerous /large game format. So we are looking at a low/mid power variable that would be equally suited to wild boar and big deer/antelope/buffs etc. However, it also proved near ideal on a very different quarry! The spec is 1.5-6x42, which for this sort of scope is very useful as it will allow for close-in work yet will also be able to push the shot out to 200-yards + on a good day.

This example has an illuminated reticule (Flash Dot), which given the magnification style of their 1st focal system adds to its effectiveness across the board, if not being down right essential at lowest power! The Zenith layout is a bit radical as it has a rounded as opposed to angled objective bell, which gives the scope the look of a torch. On this with its 42mm front end it’s not so obvious!

A 1st focal plane system means that as you dial the magnification up/down both the target and reticule expand or contract accordingly. So down at minimum mag the cross is very thin and up at maximum (depending on the spec) can look massive and also reduce the overall view. This is something you either like or not and I have to say that these days I am finding it more acceptable than I used to…

The build is as ever 100% with a 30mm body tube, fast-focus eyepiece, ridged rubber magnification ring and the trade mark, POSICON turrets. This is a reticule position indicator system with an inset clock gauge that shows how much unrestricted movement you have in relation to the elevation and windage planes. They’ve always done it and it’s useful, given you take note of it, but in truth I could live without it; especially if it reduced the price…

Turrets are medium height and hand dialable under removable caps, they are not target-types, more zero and forget, but easy to operate. Click values are 1 cm @ 100m (0.360”@ 100 yards). Elevation is marked T & H (up & down in German) and D & U (down & up in English) and windage L&R which is the same in either language. You get 34-clicks per turn and approximately four, full revolutions available; given the reticule is centred. If for example you run out of correction in say windage then elevation will lose about a ½-turn overall.

On the left of the saddle is the 11-position, drum-type rheostat, which can be set to switch off between positions, making it faster to turn on when needed. Schmidt includes a spare battery under the turret cap. At 12” long and weighing a surprising 21oz this is a well put together and presented scope, and the sort of glass you can bet your life on…

The scope came with their No 9 reticule; essentially this is what I would call a 4 or 4A – three, thick stadia at 3, 6 and 9 o’clock that stops before the centre with a fine cross hair coming down from 12 o’clock to provide the aim point. In this case there’s a circle at the intersection of the thick/thin lines. With higher mag Schmidt’s using this configuration, as with the 3-12x50 Klassik; I have always found the 9 a bit heavy, but in the x1.5-6 it’s not the case. If anything quite the reverse as down at X1.5 the cross is very fine indeed.

Given the nature of the scope I was wondering how to test it properly; I might go to Europe this year for some boar, but not at the moment, and Africa is not on the cards financially for a bit of time yet. It then occurred to me it would make great rabbit glass; bear with me.

Rabbits are great sport and up close present a fast and illusive running target, ideal for low mag use so very much representing a scaled down driven boar. Likewise push the envelope out to 100-yards for the longer shots at full mag.

This proved to be the case and I fitted my 22 LR Browning T-Bolt with the Zenith and spent many pleasant evenings practicing my running game skills. Down at x1.5 you do need it lit up as the centre cross is too fine, with the dot giving a positive aim/lead point too. Likewise in woodland it’s almost like shooting a red dot with target acquisition and aim point becoming very instinctive.

Going the other way I took the T-Bolt with me up high seats and at X6 it was more than enough for head shots on rabbits and hares out to 75/100-yards. So simulating longer range use on what are scaled down targets. Here the medium magnification in 1st focal plane did not blow the reticule size out of proportion either.

Truth is; this is a scope that given its parameters is near ideal for close and medium range use; no matter what your quarry. Though priced as you might expect the cost of both lit and un-lit versions are still good by comparison to the other, top, European brands.

Verdict
Good all round scope that will last a life time