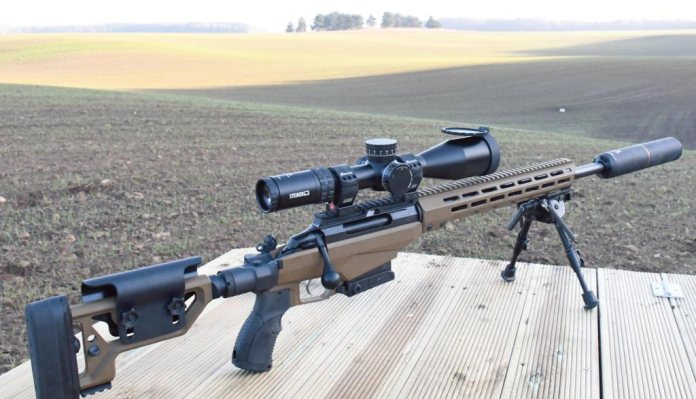 The 5-25x56 Riflescope based around a 34mm tube has been the cornerstone of the premium Tactical and precision market for more than a decade now. Many premium manufacturers have launched models to compete in the top-end of the market with the overall specification often copied by lower-cost scopes to appeal similarly. The modest 5x zoom ratio with a large 56mm objective offered plentiful light gathering without too much magnification compromise and that 34mm tube, that was generally first seen here, was able to accommodate decent sized lens elements alongside durable mechanical packages offering plentiful elevation/windage for long range performance.

The Steiner’s 34mm maintube is smoothly anodised with little likelihood of stripping the skin dust from your fingers. Elevation and windage are mounted on the central saddle with meaty tactile turrets enabling up to 27 mRad of vertical travel for long range shooting. A zero stop is present with a small amount of negative travel and the outer dial shows markings for the two available turns extending from your likely 100-metre/yard zero out to long ranges. I stick to metric these days, as I favour the mathematical simplicity and complete agreement with mRad turrets whose markings and individual clicks each engage 10mm/0.01mRad of bullet impact shift on target. The right-side windage is marked 6 mRad left or right of centre which can be reset after setup. Both have dependable firm clicks with little chance of overrun, but I must admit, in this price bracket, I do like the ‘MTC’ (more tactile click) function offered by some manufacturers, even if it does carry a slight additional cost. Having a sturdier `clunk` every 10 `clicks` helps dial more quickly, especially in poor light when counting significant alterations. A pop-up indicator emerges from the top of the hand-filling control and this is easy enough to detect even with gloved fingertips, so you never mistake turn one for turn two.
Grip on either is excellent and Steiner have done a good job with clear etched visual markings to dial by, nothing too fussy or complicated.

Parallax on the left-side runs from 50m to infinity with a nice low ratio to the internal lens packages meaning you can easily control focal distance, for example, 300- to 1000-metres takes a whole quarter revolution of the dial. The opposite of this is cheap scopes that show 300 to infinity in about an eight of a turn on a small dial, making it a bit vague trying to match focus to distance. The Steiner, having high-end optics, is of a different class and it snaps nicely into focus with a clear image you can rely on with easy negation of parallax error.

Illumination control is on the very end, slightly smaller in diameter so not in the way and also featuring good grip from the machined knurling. It has 11 intensity settings with seven intended for daylight use and four for low light. Each has an intermediate off position and the outer cap retains a standard CR2032 battery.

The 7X magnification range is controlled with a rubberised collar, again smoothly silent with no internal feel of mechanical movement. Fast focus eyepiece at the back offers -3 to +2 dioptre range for personalised setup. This needs doing just once, although has no protective lens cap to close it off along with the ocular lens unlike the one supplied for the objective. Mine came fitted with the simpler, G2B Mil-Dot reticle showing full dot and half mil hash marks across its field of view in the first focal plane. This tallied exactly with the turrets, as would be expected with a premium German brand featuring what Steiner call ‘Military Grade’ optics. Scopes like this, should you desire, are mechanically able to accept front or rear night vision and thermal devices with plentiful mounting space for externally clamping collars on the parallel (important) outer lens bodies of the scope, so you are unlikely to run out of options.

Steiner promise reliability from -40 to 49°C air temperature with waterproof assured to 20m submersion. There is a 10 year warranty (two on electronics) to assure this and when it comes to dust and debris, it is notable that the scope shows no likely problematic slender gaps between moving and stationary components to trap unwanted matter.

Eye relief is shorter at 89mm so the `magnum boys` may want to think carefully but when looking at the overall market, optics like this are regularly paired with large, heavy rifles, usually featuring recoil compensation of some sort, and it’s more important to base the optical aiming system around a broad field of view than keeping a safe distance from a light, jumpy sporting rifle that does need the 100mm eye relief, which can actually limit some `wannabee` scopes’ performance when not necessary. The eye box was never strained throughout the recoil cycle of the rifle with noticeable ease retaining fuller sight picture while the gun was disturbed, and this is key to seeing your bullet strike on target.

Steiner also offer an ‘IFS’ model of the scope with an electronic ballistic suite on the ocular body and that will appeal to some users, but I can’t comment until I have seen and used it myself. It is certainly a step above the competition’s civilian offerings, but you need to be sure of its useful application to your rifleman’s needs before spending.

In use I found the scope easy to live with; I ran it alongside a very capable Tikka T3X TACT (new name) with impeccable capability and manners on target so I got the chance to have a good play out to 3/400-metre ranges with the M7Xi. I liked the simpler reticle design on predominantly steel plate targets allowing me to see bullet splash on the steel or backstops with lesser clutter distracting men and when firing quickly from mobile positions, loved the fact it was fast to pick up the well-weighted arms drawing my eye to centre, regardless of light conditions or background.

Illumination was excellent with little light spillage to frazzle out and having intermediate `off` stages meant I could keep it close to my preferred settings with just one click required to initiate the unit quickly if time was short. Image clarity was impeccable with good contrast and a nice colour balance, certainly very similar to the lower magnification M5Xi Steiner I used a couple of years ago.

This 7X cope is physically shorter and with higher magnification that might have sacrificed a tiny amount of optical performance, but unless used alongside its former protege I’m not sure I could swear to it. Most important was the lack of a sudden drop off in performance as light fell, the image available naturally diminished in brightness with linear gradient similar to that of the atmosphere itself and this is a great sign for me.

Some scopes really don’t like use of their high mag settings in poor light and although you can expect things to dim down a little, I hate it when there is a definite drop off point in the zoom range which the Steiner confidently avoids. Given the low winter sun and very bright conditions on New Year’s Eve when I predominantly used the scope at extended distance, it was a joyful delight to avoid any issues with internal reflections within the tube and problematic chromatic aberration or flare in the view. As can be seen from some photos in use, the bright sunshine was behind targets, effectively keeping their faces in shadow yet still perfectly visible, retaining good contrast against the background at range.

All windage and elevation corrections performed as expected with the choice to dial off or aim off, so simplicity with the confusion-free First focal plane specification. That 89mm eye relief was really nice on the type of rifles intended for use with the M7Xi, you got that feeling of being closer in and more immersed within the target’s environment and broad field of view than the feeling of looking down a tube at distance so many sporting scopes give you.

There is a tiny amount of tunnelling at 4x in the field of view as magnification is reduced but I mean tiny, as you can hardly detect it unless specifically tasked to look for its presence, but the edges of the image are still as flat and in sharp focus as that of any other object across the field of view, reducing any unwanted eye strain.

I think Steiner have really nailed this optical design; no scope is the master of all tasks, but it’s good to see the M7Xi so thoroughly meet its usage environment. In a world of which scope is `better`, optics like this Steiner are not to be confused with premium sporting optics who may offer a little more image richness but are nowhere near in terms of tactical capability and long-range mechanical adjustment.