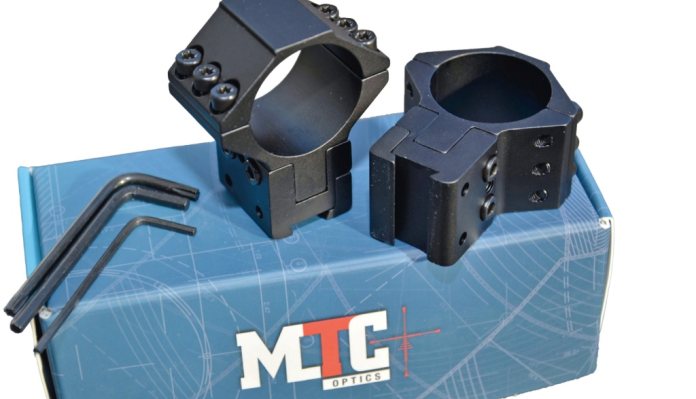 Blueprint Mounts from MTC Optics have proved highly popular and now the brand has produced a new addition to the range - the AS30, which are 30mm 2-Piece Adjustable Ring Mounts. Aimed at users of scopes with the larger 30mm body tube, it’s that adjustable mechanism that will appeal.

Being able to adjust the mount to get near zero, means that the optical adjusters on the scope itself can be centred. Let’s run through the fitting procedure with the mounts, and the whole process should become clear.

Stage one is to slacken the lower screws on each base, then offer up the mounts and tighten them onto the gun’s dovetail rails, in roughly the right area. Now, undo all the screws and remove the top straps. Place the scope in position and gently tighten the straps back on, in the same place they came from, tightening alternate screws, across, and end to end, in much the same way as doing up car wheel nuts. The idea is that the pressure is evenly spread. At this point, I have to say that having three screws across on these mounts is overkill and a bit tiresome, but just ignore the middle screws until the end, then nip them up and check everything. Assuming we have checked the scope is level and that eye relief is correct, the next step is to centre the scope turrets, which is not essential but preferable. Wind each turret right to one end of travel, then wind right through the range of adjustment and count rotations. Now wind back to the midpoint on each. For example, if there are 5 rotations, wind back 2.5. You have now centred the optics.

We’re now ready to adjust the mounts. Fire a couple of shots and gauge the point of impact. If the shots are low, we need to raise the POI. Gently slacken the upper screws on the side of the mount, until a small amount of resistance is felt. These mounts have a 2-part body that allows the scope to lift and tilt. Then, raise the scope up at the back, lifting the scope/mount body, just by a fraction, before nipping up those adjustment screws and checking the POI again. Adjust accordingly. An element of trial and error is needed here, as the tiniest amount of movement in the mount body will have an effect down range.

Likewise, if the POI is high, we want to move it down, so we would physically raise the front of the scope up in the mounts. When the POI is close to the crosshair or a couple of inches away, fully tighten the mount adjusters. Now, finish off by tweaking the zero using the turrets in the usual way.

Get past the excessive six screw straps and it’s hard to fault these mounts in practical terms. They are ideal if you just want to centre the optics of the scope, but that aside, they are also a great ‘get out of jail card’ for awkward guns or scopes that have turrets with minimal adjustment. The range of adjustment on the AS30 mounts is enormous.