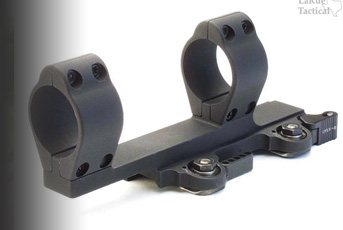 As an old AR15 shooter one thing I really appreciate is a decent scope mount. In the early days when all there was were carry handle uppers I used the original Colt 3x20 BDC optic with its gutter mount. The advent of the flat-top receiver with integral Picatinny rail opened up a world of accuracy as mounts were now made to a professional level and allowed the use of more standard, higher power optics. One of the best was the A.R.M.S. with its QD base. New to me is the LaRue Tactical LT-104 unit, which in some ways is similar though offers a few solutions and innovations of its own.

A visit to their website shows that LaRue make a wide range of tactical accessories for AR15s not the least of which is a range of optical mounts. For the shooter who wants to vary the glass on their AR from say a tactical scope to a red dot; the LT-104 looks the best bet as it offers a QD, return to zero ability. Made of precision-machined, bar-stock aluminium and type-III hard-coat anodized the mount is a cantilever type that pushes the scope well forward, depending on where it’s set on the rail. This offers near unlimited eye relief options.

The rings are different and vertically split and attach to raised lugs (spines) on the base. LaRue use steel thread inserts and diagonally-opposed screws, which means as you tighten up you pull from both sides, which tends to negate the scope rolling affect you get with normal rings. I found this made it much simpler to position the reticule vertically knowing it would stay there once fully tightened down.

The base uses twin throw levers on the left with adjustable tensioners that allow it to swing over and locate onto the Picatinny rail. When in position they are pulled rearwards to fully engage and secure the mount, the rear one has a push/pull sliding locking catch. Also different and potentially a lot more secure is the use of twin, integral lugs that engage with the recoil slots in the flat top rail. I have to admit to never seeing a double set up like this before as all the mounts I have seen use just one.

Given you take the scope/mount off and return it and use the same position on the Picatinny rail the LT-104 should give a guaranteed return to zero, which I found to be so. With a choice of 1”, 30, 34 and 35mm rings this is a well thought out and engineered design for those looking for the ultimate QD scope system.

PRICE: £285
FOR - Exceptional, QD scope mount design
AGAINST - Not cheap
VERDICT - If you want the best this is probably it…