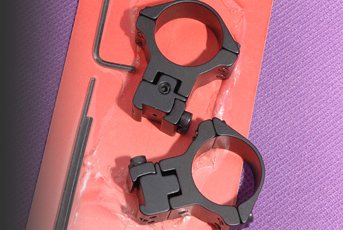 Sportsmatch are one of the biggest names in scope mount production, and should be a source of great pride, since they hail from good old Blighty and export mounts around the globe. Many of the worlds special forces are counted among their regular customer base, which speaks volumes for the sheer quality and integrity of the brand.

The new mount is two-piece and the clever part concerns the body design. Basically, the design is adjustable for windage, elevation, height, and lateral position.

With this mount, the scope can be virtually zeroed by adjusting the mounts alone, and only using the scope’s own turrets to fine tweak at the end of the process. This means that the optics can be ‘centred’ , which sees the turrets set to their mid point of adjustment, prior to the mounts being used to zero the impact point. By centring the optics, the scopes internal mechanism is under minimal stress, rather than being wound too far in one direction.

A further benefit of this mount concerns the classic air rifle zeroing scenario where the scope has run out of adjustment on the turrets (usually too low), yet the impact point is still several inches from zero. Barrel droop can be a common problem, which leads to this predicament, as can scopes that simply have too limited a range of internal adjustment; requiring a near perfect set-up on the rifles action, to allow the zero to be set at all.

A crude ‘fix’ is often to pack the rear mounts with a small layer of film negative, foil or plastic; this can work but is hardly ideal, as it can put stress on the scope body.  So the new ATP66 promotes good practise into the bargain, but how does it work?

Each mount has a movable top half which can be adjusted within its base. The mounts are locked onto the guns rails, and the locking screws must then be slackened on BOTH mounts, to allow for slight movement of both when one is adjusted. The scope can then be gently set into position.

Elevation can be adjusted via a small screw in the foot of the (rear) mount, using a special ball-headed Allen key - so shaped as to allow for easier access into awkward areas. This elevation adjustment in the mount is apparently a unique feature; along with the fact that the scope sight line height can effectively be set as previously stated, when both mounts are simultaneously raised.

Windage is adjusted via the same slackening process, followed by the side screws. Once the zero is close (say within an inch, fine adjustment can obviously be set with the scope turrets if you prefer. I managed to set zero to within around half inch using the mount adjustments, then fine-tweaked with the scope’s turrets.

Sportsmatch claim that all development testing was carried out whilst the mounts were fitted to a spring powered air-rifle developing 25ft/lbs, so the anti-vibration rubber mounting should be well up to the job.

At £75, it’s not cheap, but I still have 25year old Sportsmatch mounts in service, and they’ve not exactly had a quiet life. If that’s not impressive enough, maybe the lifetime guarantee will suffice.