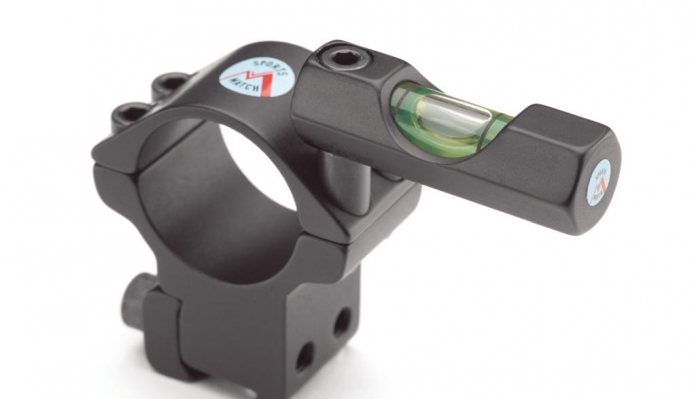 Any accessory that helps you shoot with more accuracy is helpful in any hunting situation and a piece of kit often overlooked when shooting freehand is to include a spirit level on your combo.

The reason being, if you tilt (or ‘cant’ as it’s known), your rifle from being truly vertical, your shot will veer off to one side or the other from where you are aiming the scope crosshairs. When shooting upwards at an angle, ‘cant’ can cause even more error in the precise placement of a shot. Sportsmatch UK manufacture a choice of ‘Spirit Level Kits’ that at a glance remedy this problem. The reason for the different models will become apparent as we come to them, due to certain configurations in design enabling one model to suit one or more shooting situations.

Now, when shooting off a bipod, your aim should theoretically be as solid and true as possible. However, although the rifle has a solid rest at the front, you’re still controlling its ‘trueness’ to the lateral plain of sight at the rear.

When shooting in this way I’d opt for the Sportsmatch SP1 Spirit Level Kit. This is because it bridges over the top of a scope mount and attaches to the lower mount cradle with 2x extra-long grub screws that come supplied. So, while lying prone as you watch for targets to appear, you’re head naturally held above the scope – even if you’re on aim – a glance over the top of the scope will show if you’re exactly on the level and with the minimum of movement you can then again sight in and take the shot. Incidentally, the SP1 caters for scopes with a one-inch body tube and its sister ‘level’ the SP2 is slightly longer, so that it can bridge over mounts designed for 30mm body tube scopes.

The SP3 is a model that suits both prone and/or freehand shots, due to its design allowing for it to be set flush to the rifle, thus not being in danger of snagging on anything as you move yet (like others) can easily be seen in your peripheral vision when deployed. It does this by attaching through the top scope mount cradle ‘raised-up’ – via a spacer barrel, so that it can be articulated whichever way you require. An extra-long ‘cradle mount screw is supplied that enables it to be secured to any Sportsmatch base mount.

This configuration allows the spirit level to be ‘swung-out’ into position when needed and tucked away when not in use.

The SP4 is in my opinion the most ‘overlooked’ (no pun intended) as it sticks out from your rifle when in situ. It’s also one of the most versatile because it can be seen in your peripheral vision, while sighting through the scope if shooting freehand or off a bipod. Another major plus point for most shooters is it can easily be attached and removed from the rifle in seconds without any tools except your fingers. It screws into the side of any of the company’s scope mount bases with M5 (large) screw threads and is very unobtrusive. But remember, if you want to use this model, the clamping screws that attach the base mount to the rifle need to be tightened in from the left if you want to attach it to be seen from the right in your peripheral vision and vice versa for lefties. In fact, the SP4 is useful for times you want to ‘quickly check’ your gun handling skills, as it’s surprising how cant can creep into our list of ‘bad shooting practices.’