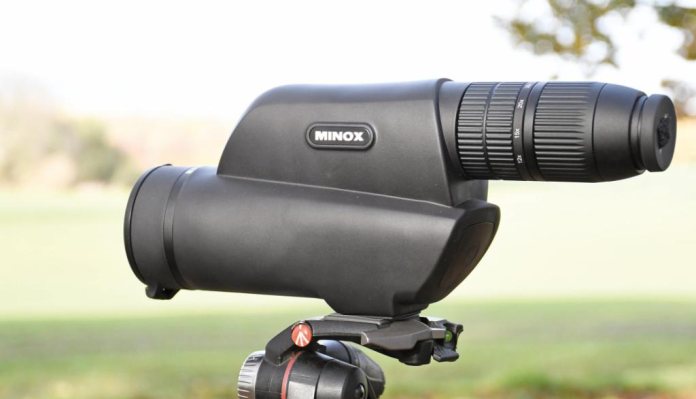 Spotting bullets and their ‘trace’ in flight fascinates me and, when shooting at long range, I often think that the spotter is quite rightly the commander of the paired shooting team. Yet, we so easily dismiss the need to spend time, money and effort looking at spotting scopes. Three years ago, I was at a press event at WMS firearms in Wales, using an early prototype of Minox’s MD spotting scopes with a reticle fitted; at that time in the second focal plane (SFP) with the usual associated caveats. Besides that, when set at a specific magnification and paired with Jules Whicker that day, myself spotting and he on the gun, I was astounded by the immediate ease and shooting capability, with little previously paired experience together, (that is needed in conversation) to place bullets on steel over 1000 metres away.

Skip a few years and production versions are with us, as well as the 60 or 80mm objective lens choice on the regular MD 60/80Z, the ‘R’ suffix now implies Minox’s superb MR2-S reticle on board in the first focal plane (FFP), so adhering to precise milliradian subtensions through any magnification. The MD 60 Z is perhaps the more ‘tactical’ of the two, with lower weight and compact size, it’s 12-40x magnification enabling greater field of view and terrain orientation. This is especially helpful if you need to track bullet ‘trace’ as it arcs through the sky, where the visual effect will skim quickly through your upper field of view as the bullet distorts the air along its flightpath.

Tallied with The MR2-S reticle, which is identical to riflescope reticles in Minox’s ZP range, and other Milliradian designs from other manufacturers. It has fine 0.2 mRad divisions on the main crosshairs with additional AQRAS and Mrad Scales in the lower left and right quadrants, for more precise dimensional measurements when assessing distance or bullet splash on target.

If you are rangefinding using the mRad principle, the spotter is equally equipped to the shooter, but for most users in the field of long-range sporting marksmanship, the ability to both spot and ‘call’ the shots quickly is not far faster. The shooter makes the shot, the spotter sees the trace and splash of the bullet at range and can instantly tell them of any corrections to be made using an identical aim off solution like, “half mil high, 1 mil right, fire again”, rather than telling them to use the target itself to scale aim offs into thin air, (Kentucky windage). Long term shooters and spotters do develop a language that works for them, like twins, but when I first had access to this capability with Jules, it was amazing just how much the system sped matters up between two people who had never shot together before, never mind at long range with constantly variable gusting winds.

The MD60 uses a newly designed mirror system to decrease size by 20%, the ocular end of the tube effectively stacked above the objective. This is recessed 16mm inside the soft touch, thinly veiled, rubber surface with a flip down lens cap. A regular ¼” UNC thread is sited within a spacious flat area for tripod mounting. I cannot state strongly enough; a good spotting scope is wasted without a decent tripod, with mass and stiffness to both support and adjust the optic. This is perhaps even more so with a fluid or fine adjustable head for positioning the crosshairs on a spotter like this more precisely where you need them.

The upper half of the tube has a 55mm diameter eyepiece, which is not a separate accessory. The forward 32mm of this controls the magnification, showing neatly machined serration for grip with the similar aesthetic on the focus ring around the ocular lens. It has a radiused longitudinal profile, so isn’t easy to attach photographic equipment to and although smooth to turn, is quite stiff, so I fitted a fishing coaster to mine for easier ergonomic control.

Full magnification range is available from less than ½-turn, yet 2 ¼ turns controls the focus from 3.5m to ∞, which is great. The external diameter of the eyepiece assembly is 37.5mm with a rubber rim; this compact arrangement, surrounding the 29.5mm lens (recessed 15mm within) gives good protection and accessible eye relief, with plenty of shielding from external distracting light sources. It fits deeply within your orbital socket and you get great image contrast, even with annoying bright lights to the sides and rear.

This assembly also rotates, because like a riflescope, you need to focus the reticle as well as the target image. It only needs doing once to compensate for your natural eyesight, rotating less than one complete revolution for +/-5 dioptre adjustment. 30mm of eye relief from the actual lens surface to your cornea is enough to suit spectacle wearers, although it’s best if you can keep physical contact to a very minimum to avoid disturbing your aim and vision. All measured targetry and shot position tallied exactly with the associated mRad riflescopes and, when used in conjunction with zeroing a Schmidt & Bender Polar T96, it’s 10mm clicks at 100 metres also matched up perfectly for a quick zeroing session on target.