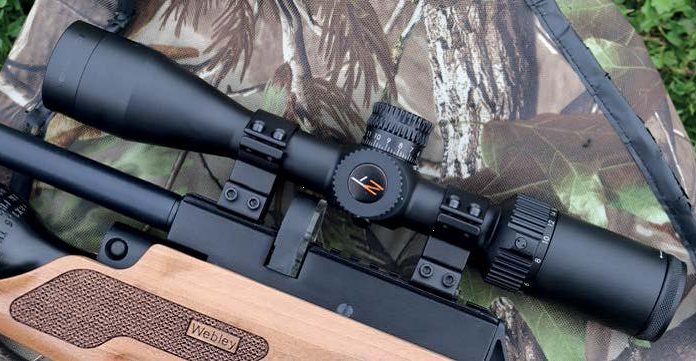 A new optics brand called ZeroTech has arrived in the UK and they have got the backing and experience of over 50 years of optical instrument expertise. This Australian firm has created the ZeroTech range of riflescopes and they have been designed and developed by shooters for shooters, primarily for use in the harsh conditions of the Australian outback, so to say they’re of a rugged build would be an understatement.

Highland Outdoors are bringing in a very comprehensive range of models and though at times some models in a series are similarly featured, it’s mainly the reticles that dissociate one from another. The complete range of scopes includes the Vengeance models, Trace Advance, Thrive, Trace and Thrive HD. There are 7 in the Vengeance range, then 2, 10, 2 and 6, respectively. The Thrive and Thrive HD will be of most interest to airgun hunters, as they focus down to 10m. I hope to test one of these at a later date, but for now, here featured is an optic that will cope with air rifle usage (especially FAC), rimfire and centrefire.

The ZeroTech Vengeance 4.5-18X40 PHR SFP scope, like others in the series, is built around an aluminium monocoque chassis and features a side focus dial on the left of the saddle, with two large Pop-Lok turrets for elevation and windage. They earn this denotation because to free the turrets for adjustment, you have to pull the turret body up and once adjusted, push it back down where it locks very securely in position. The turrets themselves adjust very positively to each station and the side-parallax dial is range marked for 15, 20, 30, 50, 75, 100, 200, 300m and infinity. The turrets and parallax dial have heavy, deep-cut ridging that gives a very assured grip, even if wearing gloves.

The parallax adjustment range means that this scope can be used with a 12 ft/lbs air rifle, as it actually focuses further down than marked, to around 12 yards. The scope doesn’t come with an extra side-wheel, as the side-parallax is just that – to bring the target into pin-sharp focus rather than give you an exact range, yet the scope is precise enough to give you a reasonable level of range estimation.

In comparison to the overall length of the scope, the eyepiece is relatively lengthy but still manages to be a neat affair. This holds the fast focus ocular adjuster and forward of this is the high range zoom ring. The latter is highly praiseworthy as its generous size and hub make it very easy to use in all weather conditions.

Not forgetting of course how smooth, yet firm it proves to be in operation.

Indexed in MOA, the PHR mimics a more traditional hunting reticle, with the addition of some modern advancements. The second focal plane (SFP) ret has a floating, glass-etched centre cross, which allows for a refined point of aim whilst losing none of the ‘pointability’ of a traditional hunting reticle. The reticle is best described as being of a modified ladder design with clear, yet unobtrusive elevation holds set below the centre point at 2.5, 5, 10, 15, 20 and 25 MOA. The floating centre cross has thicker stadia above and to both sides, so can also be used for bracketing if you’re experienced in using the method. The PHR is definitely for long range work but is suitable for air rifles (especially FAC) but more so for use with a rimfire or centrefire.

Other models in the range have reticles that are more suited to closer range airgun shooting, as they include rets such as the Duplex, Mil- Dot and modified Mil-Dot.

The fully multi-coated lenses give exceptional clarity, and the objective housing is threaded to accept a lens cover or sunshade. Plus, as you’d expect, the scope is nitrogen purged, waterproof, shockproof, and fog-proof.