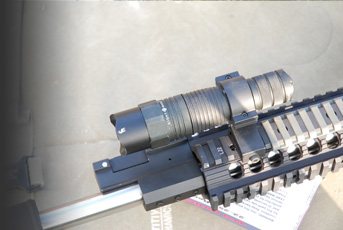 Most of the lasers we see in the UK tend to be quite small and come in their own special mount. A little different is the Sight Mark AT5G tactical, laser designator kit imported by York Guns.

The laser projector measures 1.24x5.2” and weighs 5.3oz and is made from hard anodised alloy so very much the size and shape of a compact torch. Along with this is a ring mount with a Picatinny claw, a set of three Allen keys and a push ON/OFF tail cap switch along with a pressure pad remote and cable. Adhesive Velcro pads are supplied for gun mounting. The AT5G is available in red or green beam versions, which as we shall see makes a difference to both price and performance.

Power is supplied by a single CR-123A Lithium battery (included). The green laser (on test) is rated at 5 mw and uses a 532 nm wavelength. The base allows the AT5G to be mounted on any Picatinny/Weaver-type rail, which is useful, we put ours onto the 4-Way AR15 forend of a Bradley Arms BAR 15/22 rifle. The body tube at 1.24” works out at 31.5mm so cannot fit a standard 30mm scope ring.

Adjustment is by two, flush-fit screws at the front of the unit, and there’s a screw-on collar so once you have set the beam the head is protected. Setting up on the forend is simple though I did find with the clamp tight the laser tends to point up at a slight angle, so a bit of packing might be required.

Sight Mark claims an effective range of one mile at night and 100-yards in daylight. The longest distance I tested it was 550-yards after dark and the beam was easy to see, in fact when the air is heavy with condensation you get a green line all the way to the target. In the day I could not see it at 100-yards, the best I got was about 50 on an overcast afternoon and I had to really look for the dot. But in truth it’s night time use we are concerned with. The red option is much less powerful with a quoted maximum range of 300-yards at night and just 20 in the daylight. Again that will suit many shooters; especially airgunners, as in truth it will still do the job.

The ON/OFF button switch worked well with the supporting hand controlling operation. The remote cable was OK but the pressure pad felt very thin and flat and needed a good bit of effort to operate. Likewise the Velcro could have done with a more aggressive adhesive as it would not stick to anything. In the end I found it easier to use the push button.

Overall a reasonably practical laser system should you need one. I liked the Picatinny rail, but it also needs to offers adaptors for scope mounting on both 30mm and 1” tubes. For me as a rifle shooter I’d probably set it up for 25-35 yards for close in point and shoots use. Though airgunners will doubtless use it for range finding.

Against: Remote switch a bit basic

Verdict: Worth a look but needs a scope mounting kit