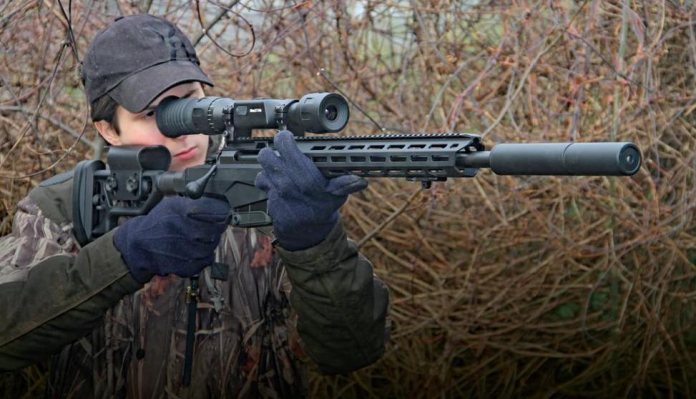 I tested the ATN Mars 4 Smart HD last year and it was an interesting thermal weapon scope, but it had a little too many features for my liking. Now they have released a Lite version, that is strangely enough called the Mars LT. Not only does it weigh less but a few of the features that you may or may not use, have been removed. There are three versions of the LT 320, with 2-4, 3-6 and 4-8x power and a 19, 25 and 35mm objective lens, respectively. The prices start at £1755, which seems very reasonable.

True to the ATN Mars Lite name, when you open up the box there is the lightweight/ compact thermal sight, charging lead, neoprene scope cover and a rubber eyecup.

It’s not a big sight, which is part of its appeal, as these small-sized thermals are just as at home on an airgun or rimfire as they are on a walkabout fox rifle. Weighing in at just 650-grams with dimensions of 11.5 x 2.2 x 2.2”, it won’t unbalance a rifle in the field. It’s also very easy to mount as it comes in the 30mm scope tube format, rather than the integral Weaver base design of old. Because the ATN has a large central saddle for the controls, the actual 30m body mounting area is a bit tight. There is only 1.5” of space at the front and 1.25” at the rear, so careful positioning is required.

The overall finish is a tough, satin black anodise in keeping with the aluminium build. However, it is not waterproof, only water-resistant.

We had the Mars LT 320 25mm version, which equates to a magnification range of 3-6x power and a front objective lens measuring 25mm in diameter. The outer diameter of 52mm houses the front focus ring, with its deep scalloped grooves for a good hold and fast focus. At the other end of the sight is the eyepiece and it also features recessed grooves, which are used to focus the display/viewing screen.

The ATN has an onboard Lithium-ion battery that has a total of 10-hours battery life and is easily charged via the USB charging cable supplied. This is fitted into a USB (Type-C) port sited on the righthand side of the central control saddle. The total charge time is about 6-hours. To turn the unit on/off, simply press and hold the power button. Incidentally, this switch can also be used to re-boot the ATN when held down for 15-seconds.

The up button will cycle through the magnification, the left adjusts the contrast of the image, the right button will alter the brightness (100%, 60%, 30% or 10%) of the screen to stop eye strain and reduce reflection, and the down button switches from white to black-hot. A short press of the central button/OK button performs a NUC, which is a terrible name but is a calibration mode for the best thermal signature. A long hold opens up the menu. When you press a keypad button, the change will be displayed for three seconds on the display, to tell you the setting that’s been altered. Other indications on the main screen are the battery status and zoom level. There is also a 3D gyroscope roll scale that shows the cant and inclination angle of the scope.

What’s on the menu?

Once you have accessed the menu, you will notice a series of icons on the left-hand side of the screen. The first (NUC), turns on/off the auto NUC or thermal calibration. A short press at any time can recalibrate the unit to get the best picture as the temperature changes. The second (PIX), corrects dead pixels in the screen by navigating an indicator dot to the defective pixel, then a short press corrects it. The third (RET), is used to select one of the reticles. The options are all red and include a 30-30, bar and dot, range finder and single dot. The fourth (SENS), is used to adjust how sensitive the sensor is at picking up the thermal heat signatures of targets. The fifth (ZERO), opens up the one-shot-zero mode, where you will see two reticles displayed. One is moved via the keypad directional buttons and the other is stationary. Fire a shot and navigate the red reticle to the point of impact, whilst keeping the black reticle on the original aiming point. The X and Y-axis zeroing coordinates are displayed on the upper right side of the display. When on the lowest power setting, one click equals two pixels (estimated). When ready, a short press of the OK button saves the zero and a longer hold exits this mode.

Human detection is listed at 910m for this model, with recognition at 455m and identification at 255m. Of course, this capability is dependant on terrain, temperature and weather conditions. The reality is that any shooting needs to be done well below 250m. The unit only takes a couple of seconds to fire up and the simple 3D gyroscope readout was actually quite useful in the hilly terrain I was in, allowing me to keep the gun cant free and to check the level.

The display is clear and the image from the 320x240 px/12μm sensor is smooth around the edge, no doubt due to it being 12μm and not 17 μm. I would definitely play with the contrast and brightness settings as they really do make a difference to the image quality and I would re-adjust dependent on the conditions you are shooting in. These adjustments also help to stop the LT from overcompensating between hot and cold areas too much and keeps the whole image more uniform in exposure. I would also recommend fitting the rubber eyepiece shield as this stops extraneous light from getting in.

I fitted the thermal to a Tikka Tact A1 chambered in .308 Win as I was testing some subsonic rounds at the same time. Thermals are fine to use day or night and to help me zero the scope I used BushWear thermal targets and some cold two pence coins taped to cardboard with foil-backed tape. Looking through the optic, these gave me a clear aiming point. A steady support is defiantly preferable when using the ATN’s one-shot-zero system, so I opted for a bench and placed the targets 100 yards away. Once a basic zero is achieved, I found it beneficial to turn the unit off and then turn it on again, to give my eyes a rest, before fine-tuning the zero.

Recognition was actually better than anticipated. The days were quite damp and dull, so quite an even thermal signature from the background, which does not help. In these conditions, I saw foxes out to 300ish yards and rabbits out to about 200 yards. All my shooting was done much closer, as with all thermals you need to really identify that thermal image before pulling the trigger. The unit does provide a clear image but does pixelate going from 3x to 6x power. In fact, that to me is all you need magnification wise, detect and get in closer.

I like the lightweight and compact size of the ATN Mars LT. It may have lost some features but it has not lost any performance and it did really well in the field tests. Detection and image quality was good but be sensible when it comes to the distances you shoot at! The fact the battery is onboard means that it cannot be swapped out when power runs low, but this was no concern as it will last you all night or day.