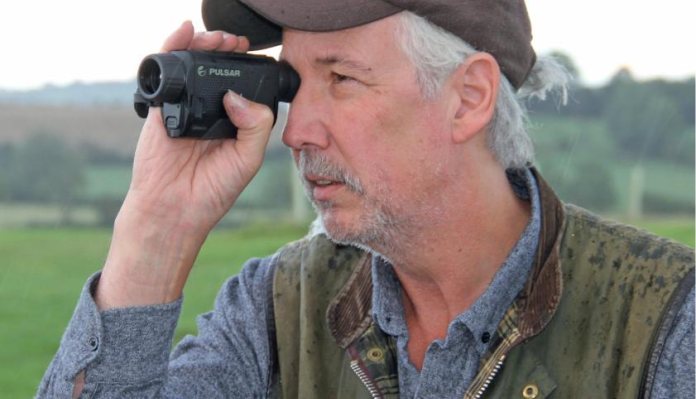 Thermal weapon sights were always out of the realms of civilian use until recently, but thermal observational devices have been more commonplace. As technology changes and prices drop, we are seeing tech and quality that ten years ago would be unheard of and too expensive for the normal hunter or wildlife enthusiast to afford.

The benefits of a handheld thermal monocular for thermal recognition of quarry or game cannot be underestimated, their usefulness for amateur or professional alike has literally changed the way we see the countryside and wildlife that lives in it. From a pure detection point of view, it saves so much time looking in the wrong place and from a safety or security standpoint the benefits are obvious.

The Axion handheld thermal imaging monoculars are small and provide great performance, plus are available in five cost-effective formats. At present, the five models are the Axion Key XM30, XM30S, XM22 and two XQ versions, one of which has a range finder facility.

I had the Key XM30, which is a great entry-level thermal monocular without the frills and is priced at £1159.95. It has a smaller viewfinder, a 960x720 LCOS type, whilst the other models use the higher resolution and bigger 1024x768 AMOLED screens.

The Key is the Axion ‘Lite’ with this smaller screen and the record facilities for picture, video and also Wi-Fi taken out. I rarely use these features anyway, being a bit of a Luddite so not having them is no chore if it saves money and you are paying for just thermal detection, which is what it is all about anyway.

The Axion is ultra-compact and lightweight, making it ideal for keeping in the coat pocket for use when needed.

It measures 149x41x69mm and weighs only 250-grams, so long observations are not tiring on the hands.

It uses a 320x240 thermal sensor having a 12μm pixel pitch that smooths the image edge to some degree and gives a more defined detailed image. It allows a deer-sized object to be detected to a maximum of 1200m. The display shows calibration mode, magnification, time and the battery level.

The very tactile and robust magnesium bodyshell has good grip points for a secure hold, with a rubber insert pad to the base and moulded in dimples where your palm and fingers will rest. It can be tripod mounted if desired via a universal fitment at the back of the body for more sustained observation duties. The simple controls on top of the body are all IPX7 protection rated, so fully waterproof. A handy padded wrist band can be fitted that really takes the strain and steadies the image effectively.

Power comes from a single Li-Ion APS3 battery pack which can be charged by USB or an APS battery charger. Battery life is largely dependent on usage but typically it is about 4 hours. Spares are £39.95. It fits into a cavity at the bottom of the Axion with an easy push-fit. To remove just push the front end button marked release battery that slides it out again. Really easy.

The front lens can be focused by the rubber outer ring as can the eyepiece to focus the icons on the main screen. Operationally wise there are a row of four rubberised buttons on top of the unit for start-up and navigation. The foremost is the power on button, a simple press and from pushing the button to full screen on is 3 to 4 seconds. An instant ‘displayoff’ mode helps to save battery life and increase the run time. A short press of the same button calibrates the Axion.

Behind this is the typical three-button menu navigation system that Pulsar use. The central button is for menu access and the other two buttons are used to navigate through the lead menu. A short press each time on the central button accesses and navigates through the contrast, brightness, magnification and range finder stadia. Using the other two buttons you can choose and set options. For example, the front button zooms the image from a native 2.5x power to 10x maximum via a 4x digital zoom or decreases the value with the back button. Same for contrast, brightness etc.

A longer press of the Menu button accesses the main menu and using the two navigation buttons as before you can change various options. First is detection mode from Rocks, Forest or Identification setting. Next is the manual, semi-automatic or automatic calibration setting, then the icon brightness, followed by the settings for time date, language. The final two choices are pixel repair if you get a blank spot on the screen and general information about the device. Everything you really need to set up and use the Axion Key in the environment you will be using the device.

Additional operations occur when holding down the front navigation button and you have the Picture-in- Picture (PiP) feature which puts another smaller second image with magnification into the top portion of the units display screen. Thus, you have a normal and zoomed image to observe at the same time. Holding down the rear navigation button scrolls through the colour pallet of detection i.e. white or black-hot as well as an array of colour temperature options.

The Key is a really handy size and comes with a protective soft case and strap so that you can sling over the shoulder or carry it in a pocket. It feels light but well made, like all Pulsars, with the lens and eyepiece protected by a rubber cap and shield respectively.

I set the Key on identification mode as well as auto-calibration for ease of use. These settings provided a clear image in most conditions, although a quick press of the front power button will give an instant manual calibration if conditions change quickly. I like to use white-hot to spot a target and then change to black-hot for a more detailed image. In regards to range capabilities, I was easily spotting cows at 800+ yards and foxes out to 400 yards. Rabbits still gave a strong pixel of thermal recognition out to 250 yards or so.

Even with the smaller sensor, the image was distinct and well-defined dependent on the differentiation between the target and the background. A rabbit in a cold field is easy to pick up but in a hedgerow edge with the sun on, it is a little trickier.

The 2.5x magnification starting point gives a wide enough field of view for normal observation, however, as the extra magnification digitally zooms, the image does pixelate quite a lot. That’s when the PiP comes in handy, as the main image is for normal viewing, and the zoomed-in image helps you see the difference and then identify.

You can, of course, use the Axion for night or daytime use and it becomes very handy to spot shot rabbits if stalking around, so you can pick them up later.

The price is very good compared to its nearest rivals, as the Axion Key does away with options that you probably won’t use and just gets down to the brass tacks, good thermal reconnaissance.

Overall, it is very handy, lightweight and well built. It has a good detection range and a decent image, which is smooth due to the high 50Hz refresh rate. All these qualities make the Axion Key an affordable alternative to a conventional night vision observational device.