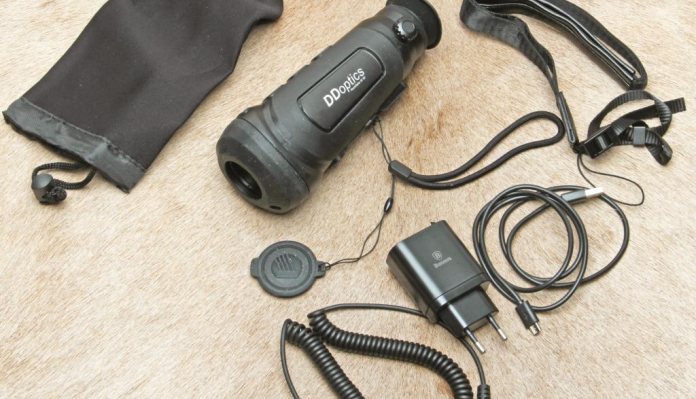 This is a similar version of the VOX version of the DD Optics thermal imager I tested in the last issue (May 2019) having a larger physical size but small detector and screen resolution. It has the characteristic, hand-held or tripod mounting profile, with the outer shell being coated with stippled panels for grip of the front end with softer rubber for the same reason. It has a range of 800 meters and the internal battery will last up to 6 hours, plus pretty simple operation and is fully waterproof and easily put into a pocket.

At 70x70x180mm the IR-50 is a compact thermal device which I do like, as it means at a critical moment you can drop it into a pocket or jacket to take a shot. It feels very sturdy and bolstered by the fact it is waterproof and has a tough external coating or black anodising, polymer and rubber.

The cone-shaped profile allows a natural and comfortable hold and the supporting hand has easy access to all the operating controls. There are four main buttons on the top section, first is the ON/ OFF switch, which is held down for seven seconds to get up the display, then another three seconds to produce an image. Like the VOX model, it’s slow. The image is displayed on a 640x480 pixels screen, again less than the VOX and it does show in less definition but still good thermal distinction. The detector is a 384x288 pixel type of 25 micron attention and 50 hz refresh rate. Thus, there’s no jitter or slur of the image, with the fast refresh, but line to line resolution is not as good as the VOX.

The objective lens is 25mm and is protected by a small rubber cover that is attached to the single strap hand strap. You also have a soft cover for the device along with charging adaptor, USB leads and a neck strap. The image is quite small and shows the state of the battery in the lower right hand corner. Next button back is the colour signature and each press changes from white hot, black hot, red hot, e hot and colour gradient. All of those are self-explanatory, but I still haven`t found out what the e hot is? If you hold this button down you access a menu to change the contrast brightness etc but it’s all in German.

Third button is a push and quick display brightness, for five levels indicated by a sun and graduated scale in the display. Hold it down and a coloured cross hair appears centre screen for a more precise thermal indication and hold. The final button is the digital zoom and each press gives 2x, then 3x and finally 4x magnification to the image. It’s actually quite good and not as pixelated as you would expect; like some other devices. A small green lit bulb behind the fourth button shows it is on.

Focus is by the side-mounted wheel, which is not my favourite, with only set focuses not infinite and it feels a bit delicate to me. Having said that, if a rabbit pops out at 20 yards and then a fox at 100 yards, it adjusts very quickly and holds the focus as it clicks at each setting.

Underneath the device is a standard tripod mounting and rubber cover to reveal the USB port. Here video can be captured and sent to an external device and this unit has a drone facility via WIFI hook up, which is accessed by holding down the fourth or mag zoom button.

The IR-50 has a range of 800 metres and I would say this is true for human-sized objects, but for sporting use half that for proper recognition of smaller game. The VOX model definitely was clearer at range but rated for closer range use. The field of view, at 25º is good and I like a wider view offered especially where I shoot where it is wooded. So, walking through the rides and tracks means you do not have to keep going left to right to get an image as would a shallower field of view device with higher magnification. Horses for courses and depends on the ground you shoot over.

Yes, the display is quite small, but by changing between the differing colour pallets you can easily distinguish objects and type at ranges with practice. Black hot is the sharpest. In fact, it showed very good contrast between edges of heat, i.e. any slight bleed of heat from a rat down a hole or emanating from an occupied rabbit borrow was clear to see. On white hot it is easiest to spot something straight away and foxes weaving in and out of the hedgerow were easily tracked out to 400-500 yards.

The on board Ii-on battery charged via the USB port is a good idea and does last a long time, one normal night’s observation is easily possible. It is easy to hold and use and is weather proof and really does like all thermal imagers illuminate the game fields like no other device. It self-calibrates for changes in conditions and is another contender to this growing sector of the optics market.

RUAG have really gone to town with all DDOptics and these new thermals as well as Night Vison devices are proving popular as they come in many specifications to suit your game, ranges and wallet. These test items did not have any English instructions which hopefully will be sorted. However, value for money wise, DD Optics show real promise and certainly help in detection of game afield.