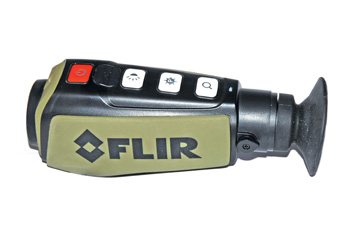 I remember the first time I got to play with a thermal imager, the man said: “try this and be careful it’s worth £10,000!” It was a small optic and I was soon having fun just pointing it at people which clearly showed their heat signature. Not night vision and not day vision, just a different way of seeing things, which has considerable relevance to hunters.

Other writers have looked at thermal imaging devices, but for me this is the first time, as I was sent a FLIR Scout PS32, thermal, handheld camera. Not sure why they call it that as it does not record, but other models in the range do, so I suppose it’s generic!

A FLIR IN THE HAND

I was first struck by the compact size and weight of the PS32. Tipping the scales at just 12 oz (including internal battery) and measuring 6.70 x 2.31 x 2.44” the tapered, green, rubberarmoured shape fits easily into the hand. On the base is a standard, camera thread adaptor so you can fit the FLIR to a tripod or similar. Controls are placed at 12 o’clock, so operation is easy and instinctive.

From the front you get the ON/OFF button in red, flip-up rubber cover for a USB charger, brightness control (five levels), polarity (three image viewing options) and x2 digital zoom. Behind this is the charger light that glows red when charging and green when full. There’s a generous rubber eyecup at the rear and on the left just in front of this is the diopter (focus lever). Up front is a simple, flip-down rubber lens cover and above the 19mm fixed focus lens a small LED task light that is operated by the brightness button only when the FLIR is switched off. The unit comes with a wrist strap, carry sack, USB cable and 3-pin plug adaptor, CD and instruction card. Truth is, it’s simple to use!

Operation is simple press the ON/OFF for about 2-seconds and the unit comes on with a 4-second boot up time for the screen to go live, it also has an auto shut down after 5 mins if it has not been used. For some unknown reason I kept forgetting to flip down the lens cover! A quick word here, only charge the FLIR when it’s switched off! From empty it takes around 5-hours and there’s a quoted, continuous run time of 5-hours and the unit should hold its charge for around two months! A battery level bar appears in the view too.

Remember this is a thermal imager and not an optical monocular so what you initially see will be a grey/white image and very little detail. The FLIR offers three methods of viewing: white hot – hotter items appear as white/grey against a dark background, black hot – black against a white/grey background and InstAlert (that’s a word?) heat is shown in red. In this mode you have four levels of intensity available. You can also adjust the view as to image brightness and the digital zoom to suit.

FLIR states you can view a man-sized target at 500-yards maximum (no zoom) and 900 yards with x2 zoom on. The Scout series has been designed for wildlife observation and enables you to see animals effectively in woodland and also through dust, fog and other weather conditions such as rain and snow. They may be hiding in a bush but they cannot hide their thermal signature, be it animal or human!

The three viewing formats offer plus and minus features, possibly the sharpest is white hot with reasonable detail. Black hot offers more contrast but perhaps not so much detail. InstAlert is in your face though detail is not so good, and as you toggle up through its levels the subject viewed ends up as one amorphous red mass. But say for fox shooting this can be put to good advantage as you can scan in this mode and get an instant target, regardless of what it might be, then click back to either white or black for better ID.

On that point the nature of the FLIR means that hot days do not do a lot for it. I saw some rabbits on a field at about 200-yards and flicked it into InstAlert and all I got was a red field as there was probably more heat coming off the ground than the rabbits. However that was an extreme case!

There’s little doubt that thermal imaging adds a totally different dimension to observation, which is perhaps the wrong word as that requires your eye to interpret a visual image. In this case it literally marks the target then slaps you in the face with its location. It does however leave you spatially unaware in some situations and certainly works better on larger species too. Price, well not cheap but a lot better than I thought given the ability!

FOR
A different and effective way of looking at things

VERDICT
If you have a serious need the PS32 is going to add a new dimension to your shooting - day or night!