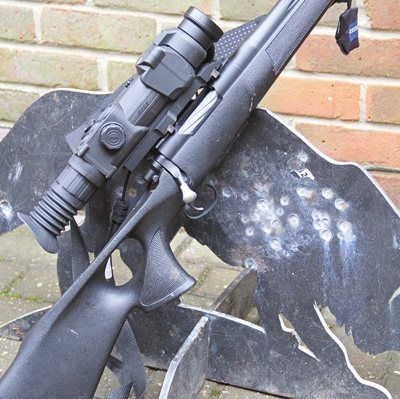 When Thomas Jacks said they were adding one to their range I was a bit sceptical, only because positive target ID at range might be hard. Having shot the Apex out to 150 yards I can confirm the image is very good and you can spot the difference between species during the day and night; just keep the ranges sensible!

The prices on thermal kit have crashed yet quality has gone up - so now it is becoming a realistic proposition especially when some normal optical scopes are at the £2500-£3000 mark. Trouble is -and it’s really a moral dilemma - is it now really a fair chase? As thermal sights will detect any warm object so nothing can hide, nothing! But that’s your choice not mine, I`m just here to test the kit and give an honest appraisal!

As with the digital NV (night vision) sights, due to the electronic nature of manufacture you can pack a lot of features into a small package. Other than the manual focus, and ocular eye focus, it is buttons that operate the manual-driven display system. This includes images detected on a 384x288 pixel Microbolometer sensor that is displayed on a 640x480 OLED display.

If the optic at x2 mag is not enough then a digital 2x zoom can be instantly accessed by a push button which is displayed as a ‘picture in picture’ image. There are three calibration modes, manual for tricky heat situations, semi auto for quick changing conditions and automatic for normal use. Also three operating modes – ‘Rocks’ for enhanced contrast, ‘Forest’ for low contrast targets and ‘Identification’ for improved detail images.

There is also the very handy image inversion mode, i.e. ‘White Hot’ or ‘Black Hot’, this allows a more precision detection when surrounding foliage can sometime has a similar temperature as the target. Plus Black Hot usually has a more detailed image. The digital choice is also a big bonus with 10 reticule options and illuminated dot centres also and trajectory compensation and also black/ white reticule view - more than enough.

Sighting in is also digital menu-based and actually very easy. Each click is 33mm @ 100 m which is a lot but with X and Y co-ordinates being able to be memorised for three differing weapons or bullets/ loads it’s a versatile system. There is also a one shot zero option that takes the headache out of the process. It uses 2 x CR123A batteries which is fine as there is a power saving mode but I would strongly recommend the external power pack that gives all night viewing and attaches easily to the Picatinny rail.

Other extras are video output so images can be recorded on an external recorder. You also have a wireless remote control for surveillance and even a pixel repair option for hot spots on the image display. If that was not enough there is a plethora of display brightness and contrast adjustments for fine tuning the image to your tastes and lighting, I say lighting, I guess it`s a warmth setting?

On top of the totally waterproof outer shell of high impact polymer are three main controls. Largest is the On button, that with a short touch is on and long touch is off. Whilst on, another short touch puts the Apex into display mode to save power and a quick touch instantly returns full vision. Second button is the calibration control which when pressed operates the calibration of the view as is or dependent on “Cal” setting operates these also. The final button is the extra modes controls. Here a short press operates the pic in pic zoom feature if activated.

To activate the main menu and brightness/contrast modes is done by the right sided wheel control. By turning this the brightness is adjusted with the amount displayed on the OLED screen, but if you press the centre quickly it switches to contrast and now turning adjusts contrast and extra pushes activates gradual digital zoom.

If you press the centre for a longer time you enter the main menu. Here the fun starts. As I’m an old fogy now I find menus a pain, I like nuts and bolts but this way allows so many options its mind boggling. You now have two menu options: Menu One allows cal mode, weapon selection i.e. three options, selection of pre-loaded reticules, brightness control, reticule colour and Pic in pic.

Menu Two is where it gets to the nitty gritty; one shot zero, freeze zero, video out selection, clock setup, remote access, pixel repair and reset default. You use the turn wheel controller to work your way through and you soon get used to it.

Take another shot to confirm you are in the ball park. It took me four shots as my target was cold and did not show up very well and you have to get used to the large click to reticule adjustment. Freeze adjustment is nearly the same but takes a still image of the first shot so you can adjust the reticule to that shot without having to keep the rifle pointing downrange. That’s the basics, you can trawl through the menu list at your leisure as the manual is very good.

You notice the lightness of the Apex and appreciate it even with the external power source.

I set up the reticule with the simple centre placed cross and floating illuminated green dot sight, I found this worked best for me but trajectory compensating reticules where also helpful. I set various steel silhouette targets out to 200 yards to gauge effective range. Due to the cold nature of steel at twilight they showed up as solid black, during the day they got hot and again where difficult to define between the foliage.

Rabbits out to 100 yards were all engaged even with the x2 power that’s because although the pixel rating looks low the OLED screen is clear and I had good 2 inch groups at this range with the .22 Satan and 3 inch with the .22 rimfire using CCI Segmenting ammo.

The fox target even with the x2 mag and digital zoom up to x4, pic in pic was actually very good I would say on a fox 150 yds was max but I did have hits out to 200 yds but truly that`s iffy! Regards image I am still amazed how good these thermal imagers are. Because everything has a thermal signature you have a very clear image, no pixilation at all, clear and easily defined target like a black and white image especially on black hot mode.

Detection range is 1300 yards plus and I would go along with that, I could see deer half a mile away on a distant hill and rats scurrying around the barn in total darkness. With the aid of the contrast and brightness buttons detail of the target (i.e. quarry) is very good and identification was no problems. A couple of things to note are, you cannot see through foliage, only spot a warm body between leaves if possible and fog really limits the range.

I know people are sceptical and worried about what the thermals can do, but having shot using this Apex I am very impressed, certainly it takes shooting to another level, how you use it is however is up to you as very little can escape the gaze of the Apex.