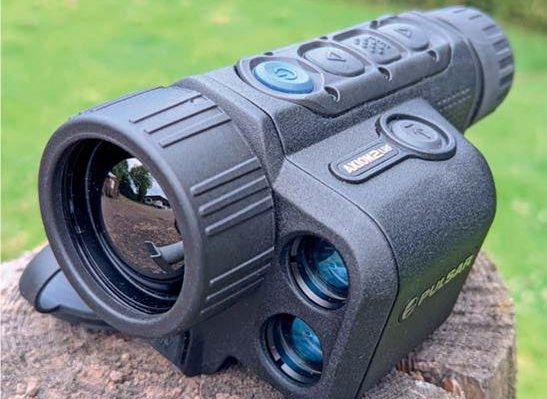 Pulsar’s Axion 2 series can fairly claim to be the benchmark for thermal monoculars. Impeccably made and easy to use, they deliver effective results at a competitive price, plus are beautifully compact and pocketable. Model choice is straightforward, too. Opt for the entry-level Axion XM30 at £1,069.95, or step up to the Axion 2 XQ35 at £1,549.95, gaining a wider field-of-view, higher resolution, and longer run-time in the process, or stump up a further £290 and go for the LRF model, which adds a 1000m laser rangefinder to the package. If that’s not enough for you, then you can go all out, spend £790 more, and treat yourself to the top-of-the-range Axion 2 XG35 LRF model, which is the subject of this review.

So, why might you want a laser rangefinder built into your thermal? As Pulsar rightly point out: “understanding target distance is an essential factor in making the right decisions.” These decisions may be about whether and how to stalk a target, whether to shoot and where to aim. That’s true of any rangefinder, of course, but building a rangefinder into a thermal (or digital NV) device gives you the same capability day or night, which a conventional rangefinder does not.

There’s an appeal in terms of bulk, weight and simplicity, too. Pulsar’s built-in LRF unit only adds 50-grams (1.8 oz) of weight and 24mm (under 1”) of width to the standard XQ35. By contrast, my freestanding Vortex rangefinder weighs about 155-grams. More importantly, even though the Vortex is smaller than even a regular Axion 2, it still needs its own pocket.

There’s no performance penalty, either. Pulsar’s rangefinder gives instant, accurate ranges from up-close-and-personal ratting distances right out to 1,000m. It also has a scan function that lets you track moving targets or simply swipe back and forth across a target to identify potential misreadings caused by adjacent features. This is an invaluable feature on broadly flat terrain. In hillier landscapes, meanwhile, or when out with an air rifle and targeting quarry in trees or on roofs, the option to select between line-of-sight and anglecompensated distances is welcome. Unlike many freestanding rangefinders, however, no ballistics profiles have yet been built-in.

If there’s a downside to the LRF version, it’s an ergonomic one, as when held left-handed, the rangefinding binnacle makes it harder to reach the control buttons on top. It also precludes switching the hand strap to the left-hand side. Left-handed convenience matters to me because, when scanning from a fixed position such as a high seat, I swap hands to scan the left and right halves of my arc in turn, which reduces neck/shoulder strain during prolonged observation. For me, the rangefinding binnacle makes this a little less comfortable, albeit the larger-pawed probably wouldn’t notice.

Otherwise, the Axion 2’s ergonomics are as good as ever. Front focus is via a highly-grippable rubber-armoured ring, whose matching lens cover hides a magnet used for stowing it neatly against the similarly-magnetised pad on the hand-strap. The housing itself is smoothly-contoured and made from magnesium alloy, which is an impressively strong-but-light material that also acts as the heat sink, thereby doubling as a welcome hand warmer in cold weather!

On top is an in-line control panel comprising 4 rubberised buttons. Obviously convenient for ambidextrous use, the symmetrical layout also minimises control errors by avoiding the left-right confusion almost everyone is susceptible to.

Nearest to the objective lens is the blue POWER button, which incorporates a power-saving display stand-by function. However, the start-up time is so fast (under 5 seconds), optimal power conservation is easily achieved by powering it off completely.

The POWER button also permits manually ‘calibrating’ the sensor. Any thermal sensor gradually picks up noise in use. With the Axion 2, the image can be ‘cleaned up’ manually (covering the lens and giving the power button a quick press), or via the selectable semi-automatic or fully-automatic modes, which allow for resetting while viewing.

Power itself comes from Pulsar’s capable AP5 battery pack, fitted with a quick-but-secure twist-lock cap, and neatly housed in a compartment below the eye-piece. Continuous run-time is an ample 11 hours. You can also connect a 5V or 9V power bank via the USB-C port tucked under a rubber cover at the front right of the housing.

The remaining 3 buttons also have multiple functions. When the central MENU button is activated, the adjacent ones let you scroll UP or DOWN through the options before using the MENU button again to confirm your selection. The menu itself has 2 levels, for quick and full access respectively, letting you make rapid adjustments to optimise the image for the conditions, while requiring a deeper dive to change the underlying settings. I’ve used Pulsar’s devices for a long time now, but the clarity and logic of their menus and icons continue to impress.

On its own, the UP button lets you scroll through Pulsar’s new amplification levels. Designated ‘normal’, ‘high’ and ‘ultra’, they aren’t just a renaming of the old ‘observation modes’ (Forest, Rocks and Identification), but all-new solutions based on Pulsar’s latest software algorithms, and optimised to provide an increasinglycontrasting image that overcomes adverse conditions such as rain and fog. Manual brightness and contrast controls are still present, but despite being someone accustomed to adjusting manually by default, the fact I rarely feel the need with the new presets speaks volumes!

The new levels are complemented by a new ‘smoothing filter’ menu option. When activated, it softens the gradient between pixels, giving a more natural-looking image. I liked this for sustained scanning, but with a target in sight, deactivating it sometimes revealed more detail, giving a better sense of a muntjac’s antlers, for example.

A longer press on the UP button activates the digital zoom, doubling the magnification with each press. Plus, it performs the same function in the ‘PiP’window when the picture-in-picture function (which lets you combine wideangle awareness with zoomed-in detail), is activated via the main menu.

Digital zoom levels look good in the spec sheet, but as zooming in simply magnifies an ever-smaller area in the centre of the display, it rarely reveals more useful information than the native (optical) magnification. This isn’t Pulsar cutting corners, the physics of thermal design prevents the use of regular multi-lens magnification systems, as any intermediate lens radically diminishes sensor performance. The only optical solution is therefore to fit an objective lens with a dual focal length that provides a choice of native magnifications. We see Thermtec and iRay starting to do this, but it adds a degree of weight and bulk unsuited to a pocket-sized platform like the Axion 2.

Moving rearwards, the DOWN button controls video and stills recording, complete with a ‘pause’ function giving more-efficient video recording. You won’t easily run out of space, either, as there’s 16Gb of storage on board, and access to a further 16Gb of cloud-based storage once registered with Pulsar’s Stream Vision 2 app. Files are saved in MP4/JPG formats respectively, with a class-leading resolution of 1024x768 px.

Prolonged and long-range observation plus recording can be enhanced by using the supplied tripod adapter via the thread tucked behind a cover beneath the objective lens, in conjunction with remote viewing via 2.4/5 GHz WiFi on a smartphone or tablet using Pulsar’s Stream Vision 2 app. Regrettably, in the move to this faster, more stable replacement for the original Stream Vision app, Pulsar dropped the motion-sensor function, so the Axion 2 can’t yet be configured to over-watch a bait station and automatically alert you to visitors. However, this is promised for a future update.

Stream Vision 2 does let you access all the usual menu options via its ‘Viewfinder’mode, including the suite of 8 colour palettes (white-hot, black-hot, red-hot, red monochrome, rainbow, ultramarine, violet and sepia): the first 3 being best for detection, and the other 5 for reducing eye-strain in prolonged use. Red monochrome is particularly useful at night, as it conserves your natural night vision.

Demand for the sample was such that my time with the Axion 2 XG35 LRF was all-too-brief, but how long does it take to be impressed?! As for final thoughts, the rangefinder is accurate and super simple to use, but the slimmer, fully-ambidextrous form-factor of the standard version ultimately gets my vote. That notwithstanding, whichever model you go for, the fact that Pulsar can pack so much performance into such a truly pocket-sized monocular is nothing short of amazing, while a solid warranty backed up by UK distributors, Thomas Jacks gives peace of mind.