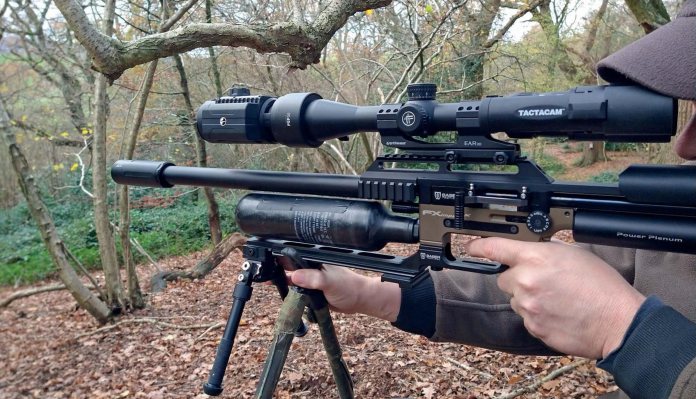 Pulsar has been producing frontmounted ‘clip-on’ NV and thermal devices for some time, but I think it’s fair to say that the perfect blend of technology and affordability was never quite there. Then in 2019, they launched the Forward F455, a third-generation digital night-vision unit that really hit the mark: holding zero perfectly, delivering a great image, and hitting an attractive price point. This milestone, along with a string of new Accolade, Axion and Thermion releases, stoked hopes that Pulsar could repeat the trick in their thermal line and that a replacement for Pulsar’s existing clip-on thermal, the Core, was on its way. That replacement is now here: it’s called the Krypton FXG50, and it is simply superb!

The Core was a truly pioneering unit in its day, but it didn’t have the sensor or display resolution to give an image with the level of definition a hunter really needs. Also, centring the image was quite fiddly and dependent on tolerances within the adapter; return to zero was adequate rather than perfect; CR123A batteries limited run time; and there was no recording or WiFi capability. The Krypton aces the Core on all these points.

To begin with, the sensor is a new generation. Made in the USA by BAE, using vanadium oxide technology, it boasts a NETD (noise equivalent temperature difference) of <40 millikelvins, compared to <60 for the Core. This means the sensor can pick up significantly smaller temperature differences and so convey more information to the user. In normal conditions, this translates into a richer, more naturallooking image, but it really comes into its own when the thermal environment is muted by cold, fog and mist.

I experienced this for myself on a December foxing sortie when a thick fog blotted out the view in my Helion XQ19F spotter. Luckily, the Krypton still let me pick up an incoming fox 300m away, call it in, and knock it over.

The clip-on format consolidates the Krypton’s long-range potential because the glass-etched reticle in the host scope can be finer than the digitally-generated equivalent. The combination of a top-end sensor, display and an independent, nondigital reticle permits longer shots to be taken with greater confidence.

The Krypton’s F50/1.2 germanium glass lens may be the same size as the one on the Core, but it shows a greater curvature, which translates into a significantly wider FoV. 15.4m x 11.6m @ 100m vs. the Core’s 9.7m x 7.3m @ 100m, and without any discernible fisheye effect. With both units the native magnification is 1X. Of course, how much FoV you actually have will also depend on the FoV and magnification of the host scope.

A magnifying eyepiece is included with the Core but is a £100 optional extra for the Krypton. The latter unit has a 5x30 spec, and because it fits through the adapter ring and attaches via a bayonet connection, it is quick and easy to remove when you want to re-fit the Krypton to your scope.

For image control, the Krypton uses the same physical and digital interfaces as the F455. The magnesium-alloy housing is identical as are the focusing knob and the four-button keypad on top.

Each button has multiple functions, I found these intuitive. The 12 o’clock button is for power, standby and manual calibration; the 3 o’clock button selects video/stills, starts/pauses/stops video and increases scrolling values; the 9 o’clock button decreases scrolling values, switches polarity or toggles image modes; and the 6 o’clock button selects options, and gives quick access to the brightness and contrast functions as well as access to the main menu. I like the symmetrical layout, and the buttons are a good size. Nevertheless, the lack of prominent tactile reference points suggests someone forgot that users would need to find them by feel alone and would often want to do so when wearing gloves.

The digital interface features the neat clock-face menu from the F455, whose centred, circular layout keeps it visible up to 7X. The status bar still runs along the bottom, however: so, assuming your host scope lets you see it at all, you’ll need to zoom right out to check the time, battery level, etc. This is no problem, but not so Pulsar’s decision to locate the recording icons in the top R/H quadrant where they quickly disappear. The result is a good deal of junk recording and –worse- unrecorded experiences.

Important, too, is setting the calibration mode to ‘manual’ or ‘semi-auto’, since the masking of the status bar prevents you seeing the countdown to recalibration in ‘auto’ mode and can result in the unit recalibrating at the worst possible moment: i.e. as a shot is taken.

Another missed opportunity is the absence of both the remotecontrol unit that accompanies the Core and Trail, and the menu option that would let you add one as an extra. The remote is the perfect way to run these devices because you can keep your forward hand on the stock for everything except focusing. A further niggle is the use of an untethered twist-on/off lens cover in place of the hinged cover used on the Core since this is easily dislodged and I have more than once had to retrace my steps to search for it.

The way Pulsar has changed the mounting system is a pleasant surprise, however. Whereas the F455 requires you to buy a dedicated bayonet-type adapter for each host scope; the Krypton and its new PSP adapter are attached and removed as a single assembly. They are joined together by a ball-and-socket clamp, which lets you quickly centre the display in the scope’s field-of-view. It should be said that the point-of-impact doesn’t depend on this alignment because the lens system ensures that the live image –as opposed to the screen graphics- is always centred on the crosshairs.

Three adapter sizes are available, and to achieve a perfect fit each comes with a set of Delrin bushings that slot in between the objective bell and the adapter’s cam-operated clamp. This is great when you have multiple scopes that are close enough in size to suit one adapter, just swap out the bushing and you’re good to go. Where the size difference is greater, you will need to buy another adapter; and swapping adapters means spending a couple of minutes with an Allen key in hand. Nevertheless, it’s a better system all told.

Also better is the power supply, which comes from Pulsar’s standard rechargeable IPS7 B-Pack rather than the universal but short-lived CR123As used in the Core. Run time is 4-5 hours, but can be boosted by fitting the optional higher-capacity IPS14 B-Pack; or by removing the battery entirely, covering the connector with the supplied blanking plate and hooking the Krypton up to an external power bank via the USB port. Unfortunately, the port is perpendicular to the device, so the supplied cable juts out some 5cm sideways when connected. Come on, Pulsar: give us a cable with a right-angled connector! (And while you’re at it, design a rubber port cover that actually stays closed.)

The recording and connectivity package includes a pause function that saves creating - and subsequently having to splice together - multiple files of the same event; 960x720 MP4/JPGs; 16Gb of on-board storage; and a WiFi link to the Stream Vision smartphone app that allows for remote viewing and configuration, file transfer and storage, plus firmware upgrades. Download/ upload speeds are noticeably brisker than on previous devices, too.

I ran the Krypton on three day-scope formats: 4-16x44, 3-15x50 and 5-25x56. The first two were good, the last, marginal. For target acquisition and most shooting I was happiest at 3X/4X, as 5X limited the field-of-view; but the image remained good up to 8X, so being able to zoom in for more precise shot placement at longer range was a genuine asset. All the scopes used were FFP models, but the finer cross-hairs of an SFP reticle at this magnification would be particularly beneficial here.

To sum up, there are undoubtedly some things I would change on the Krypton - the lens cover, the USB port cover and cable, the feel of the keypad, the position of the recording icon, and the lack of a remote control- but everything else about it is a huge step forward, and the hunting advantage it gives you is unprecedented. Despite already having a very capable thermal scope in the Trail XP50, I simply could not bring myself to give the Krypton back. It’s just too good!