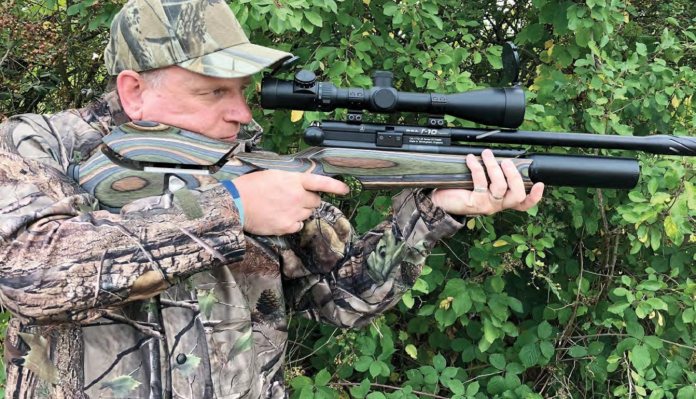 Most stocks fitted to air rifles these days are very well designed and ergonomic and are far removed from the rather plain bits of timber that used to adorn airguns of yesteryear. In fact, for a long time they pretty much mirrored those of firearms but it all started to change when the majority of air rifle shooters started to fit telescopic sights. The problem before was that this lead to the head being too low to comfortably see through the scope, or the head being off the stock if you could actually see through the scope properly! Airgun stocks evolved until we actually had cheekpieces that were the right height, until these days when we are pretty spoilt when it comes to furniture.

However no matter how nice standard stocks are, many people still like to customise their rifles and one of the easiest ways to make it stand out from the crowd is to fit some form of after-market timber; this is where Form Rifle Stocks come in!

I drooled rather too much over some of Form’s wonderful looking stocks at the British Shooting Show, then went back for another drool at the Northern! A couple of examples really caught my eye, one of which was for BSA’s R-10 buddy bottleequipped PCP. Now, the R-10 has a lovely stock from the box, so you’d think that there would be no point making a custom stock for it but it’s a cracker!

First of all, look at that laminate! Brown, green and grey always look great when bonded together and really show the elegant contours of the design once machined. The thumbhole fits my right hand like it had been made for me, with a comparatively upright grip with finger grooves at the front; the grip flares towards to base to form a perfect shelf, keeping the hand in exactly the same position each and every time the rifle is picked up. Form have fitted an oval plate to the base, with ‘Form GB’ engraved in it, which is a nice touch. A really pleasing feature are the scallops on either side of the stock above the grip that flow back above the thumbhole itself.

That leads us nicely onto the butt, which features a, roll-over cheekpiece. This stock is available with a fixed comb but as you can see from the photos, this variant has a height-adjustable style. This is perfect, as it allows the owner to tailor the fit perfectly, to achieve optimum eye/ scope alignment. Nothing as old-fashioned as an Allen Key is needed to alter the height though, as a stylish, triangular button is simply pressed in a few millimetres, against spring pressure, allowing the mechanism to slide up or down as required. There are two rods, one at the front and one at the back on the adjuster mechanism, with a threaded rod in the centre that engages with the locking catch.  Once in position, the cheekpiece is rock solid and there’s about 32mm total movement top to bottom, which should be plenty for just about any scope/mount combination.

At the rear of the butt is a soft rubber ‘Limbsaver’ pad that grips the shoulder well, with a black spacer between it and the timber. The bottom of the butt has a sling swivel stud fitted, which is a nice touch, as fitting your own is always a fraught affair; trying to position it correctly and desperately trying not to damage the stock when drilling the pilot hole and there’s always the danger of splitting the stock as you screw the stud in! So, well done, Form! The swivel is complemented by another under the forend, so that’s where we’ll go now…

The underside of the forend is quite flat but the edges are rounded, so it should please most tastes. There’s a cut-out for the R-10’s pressure gauge and a hole for the mounting screw; this stock used the standard BSA trigger guard and pilot holes are drilled to take the screws. The forend flairs out towards the tip to accommodate the buddy bottle and this is where a slight compromise has been made, as the tip is ever-so slightly thicker than it could be but I guess it’s like this for added strength, as this could otherwise be quite a weak point. Form know much more about making laminate stocks than I do, so I bow to their better judgement here!

The overall look of this stock is spot on and I couldn’t find fault with how it’s made and the finish is silky smooth. Fitting was straight-forward but the buddy bottle needs to be removed before the original timber is taken off, which requires a bit of safe dry-firing as you unscrew the bottle to bleed the air gently, so preventing damage to the sealing O-ring. The stock just slips on instead of the original and is secured with a single bolt; the original trigger guard and screws are used. As I said, I really like to R-10’s standard woodwork but the Form just adds that extra something but obviously won’t be to everyone’s taste.

In use, the rifle functioned as before but the Form stock really is lovely and the adjustability is a real bonus. As you can see from the photos, it completely transforms an already great rifle and I can only commend this relatively new company for making such great products. I think that £478.40 is great value for money and I look forward to testing more of their stocks.