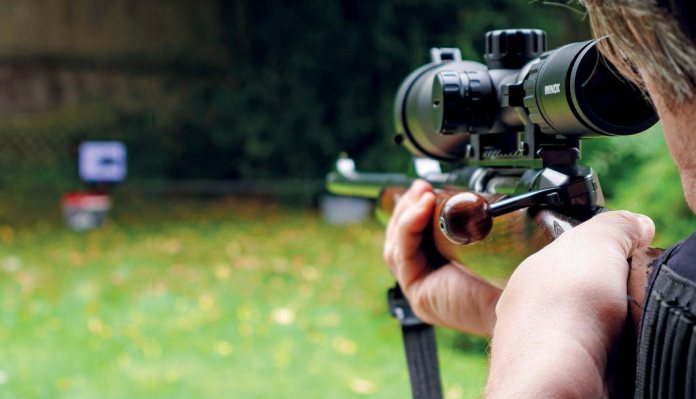 With COVID heavily impacting shooting this year, I couldn’t have been happier to have Accurize Shooting System’s (ASS) Pro kit for laser-based indoor target shooting on test. This review is about Accurize’s new moving-target add-on, but here’s a quick recap on the base system.

It starts with a cartridge-specific chamber insert housing a red laser that is activated by the firing pin striking a rubber button in the primer pocket. Downrange, the laser strikes a sensor comprising of a light-sensitive red screen protected by a translucent target face. The target face is removable, allowing you to choose the design that matches your preferred shooting practice. The target housing itself is tough black plastic, about A4 size and 3cm deep (265x21x28mm). The sides are equipped with tripod sockets, there are keyhole wall-hanging slots on the back, and power comes from an internal Li-Ion battery, rechargeable via a MicroUSB port.

The system is configured, calibrated and monitored via a secure personal account in a bespoke smartphone app. Each firearm/target used gets its own individual record so you can monitor your progress within and across practice sessions, and extra fun is provided by activating sound effects simulating the report of various pistol-calibre cartridges (electronic ‘beep’ also available).

The system is designed to operate at either 5m or 10m, with targets scaled accordingly. Regular practice will improve your sight alignment, breathing, hold and trigger control from any position. Parallax issues are quickly solved by fitting one of their parallax-correcting lens covers.

I was excited to learn that a moving target rig that would allow for simulated shots to be taken at running boar and moose targets was under development. I was promised one to test once it was finished, and now it’s here!

The ‘Slider’ comes in a nylon carry case and inside is a stiff foam liner that is custom cut for the main target frame and its ancillary items. The frame itself oozes refinement: with two parallel carbon fibre rods serving as runners for the target carriage; and black-anodised CNC-machined alloy end-pieces, the latter being fitted with pivoting legs, adjustable for length and capped with rubber feet.

The target carriage sits astride the runners, stabilised on one side by the motor housing and on the other by the removable battery, which also has an ON/ OFF switch and power-in/out jack ports. A cable links the latter to the matching power-in port on the motor. Finally, a gear hidden under the motor housing engages with transverse treads on a fixed rubber belt that runs the length of the frame.

In the middle of the carriage is a platform with a rubberised surface and a central tripod bolt for mounting the target frame, which is attached longside- down via a spring-loaded adapter. Alignment of the target frame with the track depends on compressing the rubber surface. This seems rather basic for an otherwise sophisticated system, but it works, and overall the Slider’s design delivers smooth, quiet target movement even on uneven surfaces.

The Slider is controlled using a key fob with two buttons marked A and B. Pressing A makes the carriage do a single run, whereas a double-press will make it run back and forth continuously. Button B, meanwhile, controls the speed, letting you cycle from 100% through 25%, 50% and 75%.

Allowance for lead is made via the smartphone app by entering the preferred target direction and speed setting. This does mean you have to practice one speed/direction at a time. This is no hardship but could be improved by having a data link that would enable the app to either replicate the settings made via the remote or send a pre-programmed sequence to the target, thereby offering more dynamic practices at an advanced level.
The Slider adds a whole new dimension to using the ASS and to practising with your rifle at home. It will also make you a better shot, enabling you to make the most of future sporting opportunities.

Specifically, regarding the running boar and moose targets, I was fortunate enough a few years back to get an invitation from Zeiss to a German driven hunt. I’d not done this kind of shooting before, so I booked a live-fire training session with Paul Hill at Corinium Rifle Range. Paul’s coaching was clear and effective and proved to be great preparation for the trip. The Slider isn’t a true substitute for live-fire training, but it is a great supplement to it.

Live-fire practise will, of course, acclimatise you to recoil; but the laser simulation allows you to focus entirely on how you hold, move, align and operate your rifle. I should note here that the chamber inserts are rimless, so don’t engage with the extractor and thus remain in place regardless of how you cycle the action.

It is true that competing projectorbased simulators offer more lifelike targets and more varied exposures, and that they also often track the movement of the gun before and after the shot: which the Accurize system doesn’t do. Having used both types, however, I find that the greater practical benefit lies in the way the Accurize system promotes both authentic weapon manipulation and precise shooting, with skills being reinforced through consistent repetition backed up by detailed record-keeping that lets you track your progress across multiple sessions.

The Accurize system isn’t cheap, but the build quality matches the price, and once purchased, practice is effectively cost-free. The system takes so little time to set up or pack away that you can have a meaningful training session in just 30 minutes, making daily practice both feasible and easy. The inherent precision and repeatability of the system will also lead you quickly beyond a coarse centre-of-mass approach, enabling you confidently to place each shot exactly where you want it and so laying the foundations for truly humane and successful hunting.