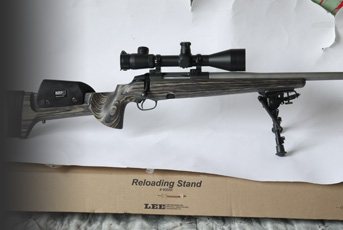 When we think of rifle stocks I suppose Norway does not immediately spring to mind. However, the Norwegians are a race of shooters, I know a few and they get the job done! So whilst talking to Peter Jackson (Jackson Rifles) at the IWA show he showed me a brand called KKC from that country. As can be seen the design certainly stands out and is something visually you will either love or hate. But by the same token once you wrap yourself around it cosmetics become less of an issue.

I would describe the KKC Varmint model as extreme ergonomics – everything unnecessary has been removed, but where it’s required they have not been stingy either; with the butt being a good example. Here it’s more an L-shaped spar with near all the belly removed and the top scalloped out. To this section is fitted a height and angle adjustable comb/cheek piece (saddle), locked by two Allan bolts. Both length of pull (LOP) and butt pad height are adjustable, the former by adding/removing spacers and the latter by physically moving the pad up or down.

Moving forward the right-handed pistol grip is large, flared and near vertical and feels much like a thumbhole layout minus the top strap. It gives a superior hold and moves the trigger finger back enough for a true, first pad position. The forend is a flat, beavertail-style with an angled base. It’s also extremely rigid and free-floats the barrel. A final touch are QD sling studs fore and aft.

The build is laminate and available in what KKC call black and what I call dark grey and a mid brown. The comb/cheek piece is black or brown. There are also two versions the Varmint and a Sporter. Hard to tell from the website but it looks like the latter has a slimmer forend. It’s also cut for the following actions: Carl Gustav/Husqvarna 1900, CZ 452, Kongsberg 393/Lakelander, Remington 700 (long and short action), Remington Model 7, Sako 75 (long and short action), Sako 85, Sauer 200 STR and 202. There’s enough choice for our market, but it would have been good to see Winchester, Ruger and the CZ 527 too.

The stock was supplied on a custom Tikka 595 action in 243 Win, so I guess they forgot to add Tikka to the list? Truth to tell it’s an excellent design providing as it does all the requirements to easily tailor the platform to suit your build and style. I have to say I like the minimalistic look of the butt and the general feel, build quality and stability is excellent. However, I would say that you do have to get past its somewhat radical looks - certainly if you don’t like what you first see - as it’s seriously worth it.