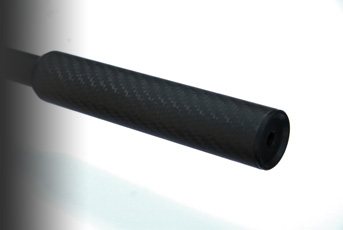 It doesn’t seem that long back I was discussing Daystate’s continued efforts to refine and improve their popular Airstream silencer range. Just over a year ago I was testing and applauding, the Mk4 version for its reflex build and effectiveness. Again they’ve stayed with the over-barrel layout, but the Mk5 version is ½” shorter than its predecessor, and 15-grams lighter giving a total weight of 84-grams. That might not seem a lot, but as it’s able to sleeve further back than the Mk4 it also results in there being less additional length at the muzzle.

At present there are units available for the Huntsman, Mk4, Air Ranger and AirWolf – they’re soon to launch an FAC-rated version for the power-crazed Daystate fanatics to complete the line-up. Unlike the previous model they’re not calibre-specific but are still manufactured from high grade aluminium with a carbon fibre outer sleeve and Delrin end caps. As a reflex the Mk5 only adds an extra 3” on all Daystate models mentioned. If fitting the silencer to an older gun an adaptor is needed. I’d say it’s essential that you use a drop of thread locking compound; the reason being that if you decide to unscrew the can without that countermeasure there’s a high likelihood the whole thing (moddy and adaptor) will come off as one-piece.

So how does the Airstream Mk5 work? Pretty much the same as before, as they have combined two, effective, silencing processes in one. Those being a plenum chamber that creates a dead air zone and a set of baffles. Inside the carbon-fibre outer chamber is a plenum chamber that by itself creates room for sound dispersal. Following that towards the end cap is the main internal baffle system. Due to the redesign, they’ve managed to lose one.

You’d think this would be less effective at taming mizzle report - well it isn’t. Decibel tests show it to be the quietest they’ve ever produced. Again, all internals are manufactured from a single billet of high grade alloy for lightness and - more importantly - so the unit can be precision manufactured from mounting unit through chamber and baffle system. This ensures there’s no possibility of the pellet ‘clipping’ anything as it passes through the unit. Basically, what they learned from the Mk4 has been bettered!

I’ve tested all models, excepting the FAC-rated unit and though initially sceptical; I have to concede it is quieter than the Mk4. Without doubt they reduce muzzle report even further and in my opinion the Daystate Airstream Mk5 Reflex Silencer is a must have optional extra for any hunter using one of their guns.