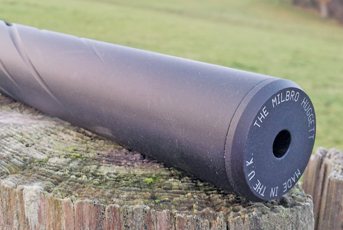 While testing an air rifle a month or so ago, I was sent an interesting new moderator design to have a look at, in the form of the Milbro Huggett. Outwardly it’s similar to its predecessor, however the swirled fluting on the body is now a rotary projection of the vents in the first chamber (and very stylish they look too!)

Weighing in at 136-grams, the outside diameter is 31mm with a tapered cone towards the barrel and in this case a 1⁄2” UNF muzzle thread, with an overall length of 183mm. The bore through the baffles is 6.53mm, thus making it suitable for both .22 or .177 air rifles. I set the Huggett against one of the most efficient commercially available air rifle moderators in the guise of the Weihrauch. Whilst outwardly the Huggett is slightly shorter, it is a little fatter so the internal volumes by eye should be comparable. Furthermore, I found the internal construction has been seemingly designed around similar principles to the Wiehrauch, however I would suggest the execution and materials are of a significantly better quality.

IT’S WHAT’S INSIDE
THAT COUNTS!

Like the Weihrauch, there are three chambers: two long and one short in the middle. These are separated by two baffles and in each there is an internal aluminium cage around which is wrapped a fine wire gauze, in turn surrounded by a synthetic (ballistic) felt and in the first chamber surrounded once again by a fine metal gauze.
An interesting difference between the two moderators are the Huggett’s ventilation slots on the outside of the first chamber. This particular design element I had my misgivings about, feeling that unless the air pressure from the discharge was fully contained it would be noisier than the Wiehrauch…to my great surprise this was not the case.

Something that I kicked myself for, as even my basic understanding of gas flow where moderators are concerned is primarily about two things: reducing the velocity of the gases and dispersing heat. While there is very little heat generated in an air rifle moderator, the effect of the gauzed vents was to slow the air escaping the first chamber and thus equalising the pressure quickly but in a controlled manner - the efficiency of the system was incredible. Testing the Wiehrauch against the rest of the field led me to believe that it was about as good as it gets, so to hear an audible difference between the two was a surprise to say the least.

At £90 plus P&P this moderator comes in at nearly twice the price of the Wiehrauch, but in its defence it has to be bar none the most efficient I have come across. Looking at the work that goes into the internals it hardly surprising and though very much at the upper limit of what I would pay for an air rifle unit I would say that the price reflects its performance and quality of build. Having spoken to Milbro their biggest problem is demand, as they simply can’t get enough moderators to satisfy both the international and domestic markets!