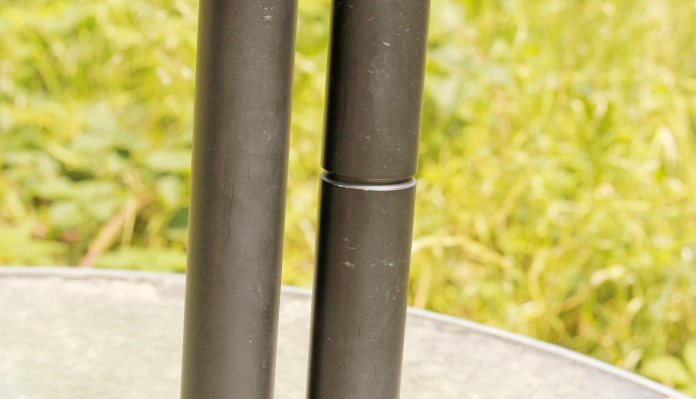 As a hunter I do prize a lightweight moderator as it makes the rifle easier to handle. However, this requires correspondingly lighter materials and as always there’s a trade-off between weight, size, strength, effectivenss and longevity. However, there is another road where alloys and plastics don’t feature with moddies made of steel and also made to last!

Such a product are the MAE moderators of New Zealand as their build spec is old school but also uncompromising in its approach. Their T-Series reflex (over-barrel) design is a good example of what I’m talking about as they combine the maximum in sound suppression with a short outboard length and a near bombproof build! Built from 304 L stainless steel, the outer is a single, drawn tube. The multi baffle stack complete with end cap sits on a crimped locating ring and the end of the outer body is rolled over to secure it into position. A bit like a rolled turn over with a card, over-shot wad on a shotgun shell!

The rear section and noticably long expansion chamber has the base welded on so in effect you have a one-piece unit. This is threaded for a synthetic barrel bushing that has to be bored out to the barrels O/D (outside diameter). However, the opposing view is that any reflex can is better without a bushing as it allows the moddy to centralise naturally and places no less strain on the barrel. With it removed you can accomodate O/Ds of up to 1”.

On test are two examples, which apart from length and weight are identical – the T12 Scout and the full sized T12 Standard, which is rated up to the 300 magnum calibres – Win Mag, WSM etc. Finsh options are plain stainless (S) or blacked stainless (B). The stainless steel build does impose some weight penalties as the Scout weighs a soild 19 oz and the Standard a hefty 23 oz. Diameter is 1.5” and both models only protrude 4.8” in front of the muzzle. However the ST has a longer expansion chamber at 9 ¾” and the Scout at 6 ¾”. So you need to know how much avaible barrel/forend you have before selecting.

I found that initially both cans - being stainless - gave a unique ringing sound, which quickly reduced as they started to foul up inside. Their weight and length also helps to reduce kick and felt recoil and equally on a light barrel they tend to negate vibration and whip issues too. They are undeniably heavy when compared to the modern aluminium moddies but they will probably last the life of the barrel, with just a quick squirt of oil after a shooting session.

MAE quotes a 3-year guarantee. I would hunt with the Scout but use the Standard for more static use such as varmint or longer range shooting where weight is not such an issue.