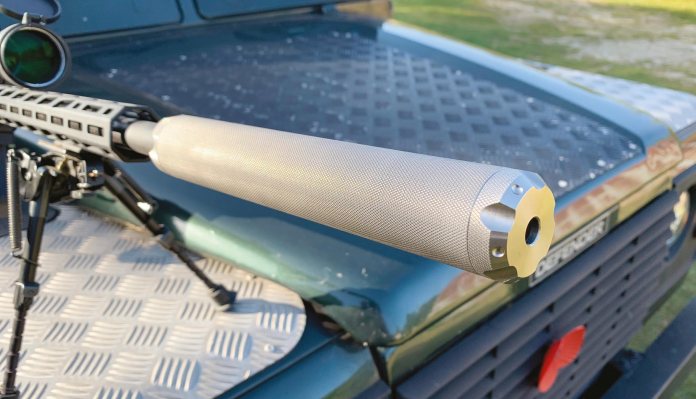 In the main, we perceive moderators for rimfire rifles of all calibres as being short and compact, one-piece units, with few exceptions. What I have here from Phoenix Tactical does seem to stand outside of the normally accepted designs. Called the Phoenix Titanium Suppressor Kit, the clue is in the name, as the main body tube is made of that light, but strong material, as are the front and rear end caps. Inside are a series of aluminium baffles that literally allow you to mix and match as to sound moderator effect.

Here’s what Phoenix Tactical say about this new can: “A completely new concept in suppressors, a DIY kit allowing the shooter to build a suppressor to fit their own particular requirements. Can be used on .22 Rimfire, airsoft, air rifles, deactivated firearms, movie props, the possibilities are endless. We can supply Titanium tubes threaded at both ends to accept Titanium muzzle mounting caps in (1/2” x 28 and 5/8” x 24) and also end (muzzle) caps; pre-drilled to suit .22 calibre but also available undrilled so you can drill yourself to suit your particular calibre/projectile). Add to these, sets of alloy baffles of two different types; firstly, large volume, which screw together and smaller non-screwing stackable types with spacer rings which can be used to create multiple, expansions chambers.”

The suppressor weighs 15.5oz and measuring 9.5 x 1.5” and is muzzle mounted only and consists of three components; main body tube, which is fully knurled for added grip and the muzzle and front retaining caps. Also knurled, they show five scalloped, chamfered cut outs.

The mix and match internals are aluminium and consists of 5x1”, dished baffles and two shorter units that screw together to make the primary sound absorbing stack. Although only one of these can attach and the other must be considered a spacer. The apertures on all are 10mm, which is perhaps a bit wide for a rimfire. Adding to this are two plain, ½” spacer tubes, the aforementioned short baffle and another, non-threaded, 1” type.

These can be put together as you like and require not tools. It’s down to you to experiment and find out what works best. I wondered why there was not anything in ½ x 20 UNF, probably the most common rimfire form in the UK. I was told they could be done to special order. I liked the fact that a spare, un-drilled muzzle cap is included so you could go bore-specific and drill it out to suit.

In use, I tried the can on my S&W 15/22, a 22WMR AR (both with suitable sub-sonics) and a Ruger Precision Rimfire in 17HMR. My concern was the 10mm exit holes as I thought they might be too big, as it turned out with the subs the Phoenix was very quiet indeed. In 22 LR, standard and HV ammo though louder were still well supressed. However, the extra speed of both the WMR and the HMR produced a sharper crack. I have little doubt that if I’d bored out the spare end cap that would have been significantly reduced, even more so with smaller individual exit holes in the baffles. I would imagine that Phoenix Tactical could accommodate this if you requested it prior to sale.