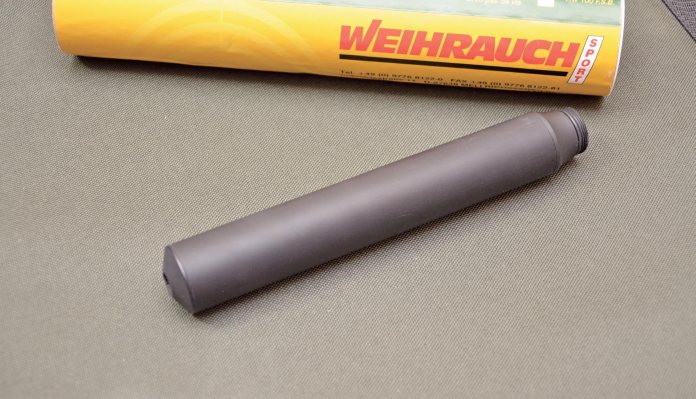 Airgun silencers are one of the most popular add-on accessories, and many manufacturers now make their own. When Weihrauch threw their hat in the ring with their own range of cans, enthusiasts around the globe soon came to realise that these were a cut above the norm, with a level of performance way above most rival designs.

Featured here is the model made specifically for Weihrauch’s popular HW97K spring powered rifle, and whilst this will significantly extend the overall length of this classic rifle, the performance gained is well worth it. This particular silencer incorporates an external thread to connect to the HW97K, and a neat o-ring at the end of the thread means the final tightening is nice and snug.

Machined from aluminium, these moderators incorporate a series of baffles and sound suppressing material, including famously what looks very similar to hair curlers. The end result is impressive to say the least, and whilst admittedly most effective when taming the crack of a pneumatic, Weihrauch’s superefficient design still takes some beating – even on a spring gun. Other versions are available including two push-on designs for 15mm barrels, and 16mm barrels, a threaded version specifically for the Weihrauch HW100 FSB, and a highly useful ½ inch UNF screw-on option.