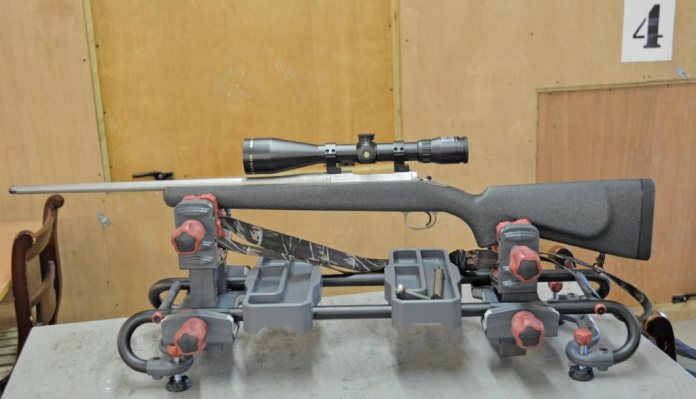 Tipton offer an extensive range of products, including: solvents and solutions, range boxes, cleaning rods and bore guides, jags, bore brushes, slotted tips, mops, snap caps, and of course gun vices! The Ultra Gun Vise is based on their Best Gun Vise but has been improved. It is designed to secure not only bolt-action rifles but shotguns (semi, pump-action and break barrel), AR15s, Bullpups, muzzle-loaders, handguns and even compound bows and crossbows, which certainly makes it versatile!

The backbone consists of a rigid, stainless steel tubular frame and four individual and fully adjustable feet, which can be raised or lowered via a knob, designed to allow the vise to be levelled. Alternatively, they can be removed, and bolted to a work top as a more permanent fixture. Using this frame as a chassis, there are two solvent-resistant accessory trays for the storage of patches, jags, cloths etc. and these simply click into place.

Included are three plastic modular chassis clamps, which can be loosened via non-slip, ergonomic adjustment knobs, allowing them to be removed or slid along the length of the chassis to the required position. Primarily, there are two solid U-shaped clamps, which fit into two of the chassis clamps. Their height can be adjusted by up to 4”. Each clamp is made up of two articulating, overmoulded, non-marring pads, designed to allow pressure to be applied to most angles of bearing surface i.e. a barrel or the butt. The pressure of each pad is controlled by rotating one of the knobs on each side and the maximum width is 2.5”, which is plenty for most rifles and shotguns etc.

The third base included allows the attachment of the Tipton AR mag well vice, specifically for AR15s. This feature allows the user to secure the rifle in place via its magazine well, instead of having to use the U-shaped clamps. Also, described as a ‘bolt service station and hammer stop’, the vise features an inlay for seating an AR’s bolt, so that it can disassembled easily. As described, this module also facilitates a hammer stop function, to help protect the lower receiver whilst dry firing.

The construction of the Ultra Gun Vise is solid and the plastics give the impression of longevity. It is a smart move by Tipton to construct it out of solvent-resistant materials. The versatility of the unit is admirable, as the modular system works well, it certainly makes cleaning, gun-smithing and maintenance a doddle. It is not cheap, costing £330.00, which is significantly more expensive than most similar products on the market; however, it does appear to be one of the few available with the ability to clamp your firearm in position, as opposed to just resting it in notches!