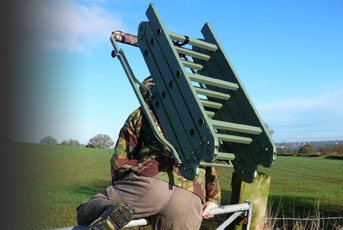 Once you know your ground, it isn’t hard to decide where to install a permanent high-seat. However, equally useful is a portable version that can often solve logistical problems. I’ve been trying out two versions recently; Bushwear’s Panther, and the new X3M1 Alu-1. Both are based on aluminium, multi-position ladders and are rugged and lightweight, easy to erect and more importantly carry, as they fold down into a portable package.

Of the two, the 4-section Alu-1 is marginally more compact than the 3-section Panther, making it a bit easier to balance when crossing obstacles. The best way to carry them is with a shoulder harness; I used the shoulder straps from a WebTex Sniper Case. Bushwear now offer a set as an optional accessory for the Panther. Whilst the Panther is by no means uncomfortable to carry in this way, the fact that the Alu-1 has a padded cushion that can be positioned to sit between the ladder and your spine makes it more agreeable.

Weight-wise the Panther is 12.5 Kg while the Alu-1 is 14 Kg. The difference is down to the Alu’s longer ladder, and to the fact that its shooting rest is made of steel rather than plastic. Setting up is easy; extend the ladder sections, which lock into place automatically, and lean it against your chosen tree. In each case, where it meets the tree there is a radiused and serrated cutaway to grip the trunk.

The Panther leans at an angle and its top section is canted back for optimal purchase. In theory at least, this means that looping the length of thick para-cord attached to the top of the stand around the tree and securing it in the cleat provided is sufficient to keep it solid.

The uppermost section of the Alu-1 (which forms its seat) locks up at a less oblique angle to the ladder. For optimum comfort, you want to end up with the seat tilted slightly towards the tree, but this still leaves the ladder closer to the vertical than the Panthers, requiring a more substantial securing system. X3M1 include a pair of 6’ nylon webbing straps with metal locking catches. The first is placed as high around the tree as you can manage while standing on the ground to stabilise the ladder, prior to climbing up and fixing the second at the top. This works fine on small trees, but the straps were almost too short for larger ones. So I had to get a longer ratchet strap.

With the stands deployed and secured, it was time to try out the shooting position. The Panther is particularly easy to climb thanks to the raked angle of the ladder and a rail at the back of the seat that makes an ideal hand-hold when performing the potentially tricky half-turn required at the top of the ladder. The seat is well-designed too, being formed from comfortably-contoured plastic with moulded-in slots for drainage, whilst the toothed plate that grips the tree has been given a smooth sloped face that serves as a back-rest.
As well as comfort, the Panther feels particularly secure, because the top section of the ladder combines with the shooting rest and its supports to create a kind of safety cage. This means you can also take shots to the side.

Getting into the Alu-1 requires slightly more resolve, since the climb is higher and steeper and it’s harder to find a good hand-hold when turning round at the top. The seat is backless, something you need to take into account when siting it, since you’ll want a smooth section of tree-trunk to rest against - with a base made of rigid steel mesh for drainage. For greater comfort, a foam cushion with a camouflaged nylon cover is supplied. It does the job, but you wouldn’t want to leave it out in the elements and it’s bulky to carry and easy to forget.

Once up in the Alu-1, you appreciate the extra height it provides over the Panther, but at the same time miss the wrap-around effect of its shooting rail. On the plus side, being made of steel, it is more stable than the Panthers, whose polymer build tends to amplify pulse and wind vibrations, making longer shots at small targets trickier than they need be. In its favour, the polymer is quiet and won’t scratch your rifle, though the Alu-1 also covers these bases, coming with a foam pad complete with nylon camo cover.

Importantly, the shooting rest on both stands is adjustable so you can set it up for your immediate needs. The Panther uses a single knurled locking knob on each side, while the Alu-1 has three. The former is quicker, of course, but the latter gives greater rigidity, which trumps speed in this case.

In conclusion, both the Panther and the Alu-1 are eminently practical designs: genuinely-portable, rugged, and comfortable to use. The Alu-1 is taller, but Bushwear offer the Cub extension (3.5 kg), which adds 33cm-100cm to the height, as well as the Den (13 kg), a kit that converts it into a free-standing seat.

For me, the key difference is in the shooting rest, where it’s a case of swings and roundabouts: the wider arc of the Panther vs. the greater stability of the Alu-1. Ultimately, where you site it will make the choice for you: if the target location is predictable but distant, go for the Alu-1, but if it’s unpredictable and closer, go for the Panther. Better still, if you can’t decide, get both: that’s what I did!

For: Portable high seats are a useful tool for the hunter
Against: Check shooting rail stability
Verdict: Great for foxing deer incursions