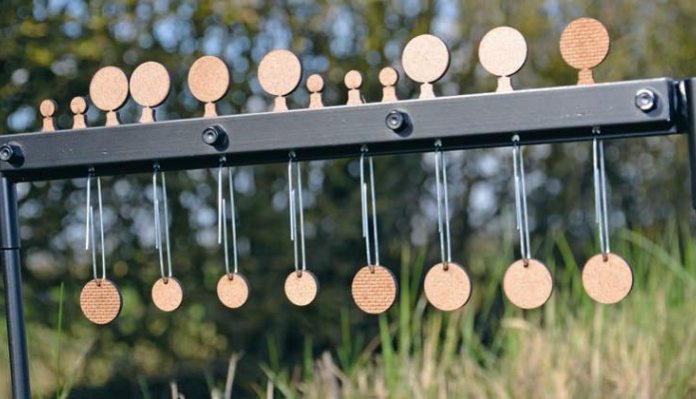 Based on Somerset, Custom Targets has built up quite a reputation for their shootaway style targets formed from 3mm biodegradable board. A big part of the appeal is the sheer precision, as the laser cutting process allows for super fine borders and kill sizes. And with a variety of exciting targets, presenting banks of tiny, super challenging kill zones, as well as plenty of easier options for fun shooting sessions, it’s no surprise that they remain extremely popular.

But were you aware that this energized company also produce something called the Replaceable Pin Target System? I wasn’t, until the irrepressible Nikki at Custom Targets, put me in the picture. The more I’ve had time to test/ play with this system, the more I have become a genuine fan.

Neatly boxed as a set, the system comprises of the main top frame assembly, two spike legs, large paperclips, and a host of laser-cut targets made from the same 3mm hardboard as their static targets. This system usually comes with 500 targets and the breakdown is as follows: 100 x 8mm pins, 100 x 12mm pins, 100 x 15mm pins, 50 x 20mm pins, 100 x 15mm hanging discs and 50 x 20mm hanging discs. Cost up those targets and you’re not far short of £30 worth. Bear in mind that Custom Targets currently have the system on offer with 1000 targets (twice the original pack) and that means that the heavyduty target frame is costing about £35. Have a play for any length of time and it’s difficult not to conclude that this is currently a complete bargain.

It’s also rather well thought out, and apparently the result of exhaustive testing and tweaking from the manufacturers. The targets themselves are, as previously mentioned, laser-cut from 3mm hardboard, which the makers have found to be by far the best medium. It is clean and harmless, unlike plywood, which was found to shatter and splinter when tested. For clubs like mine that shoot in fields regularly used by livestock, this is an important consideration.

At 12.5” wide, the heavyduty steel and aluminium main frame remains fairly compact and portable, while the steel push-fit legs are easily inserted into soft ground. However, for use on hard standing, a pair of additional freestanding feet can be purchased for a very reasonable £9.99. These are no-nonsense, again well made, and create a superwide base for full stability.

With the frame in place, the idea is to then add a selection of targets to suit the occasion. These can either be dropped into the top of the frame or suspended from below. Any of the ‘Pin’ targets can be dropped into the slots along the top and you then have target discs firmly in place, measuring either 8,12,15 or 20mm. Now slot through the large paper clips into the holes along the bottom and then either 15mm or 20mm discs can be hung from those. Paper clips may sound a bit Heath Robinson, but they simply work a treat and are cheap to replace.

With 17 pin targets at the top and 8 suspended targets of your choice along the bottom, the action can well and truly start. I set up the target at my favourite 35 yard zero range, and using my top competition rifle, from a total rest I hasten to add, took on a couple of the small pin targets. The design is clever in that just a whisper of board material connects the top section from the target base, so as the pellet connects at high speed, the main target area rips straight off with a well-placed shot. Those pesky 8mm pins look small in the scope but were fun and great practice for sure. Aim for the bigger kills, and the disc may well survive as shots rip through.

Set up in the field, with some crosswind, and the hanging targets soon start to sway, which adds to the challenge. If you fancy some practice on discipline standing/ kneeling shots, then the largest 20mm targets suddenly come into their own. Move closer to keep things realistic and keep the ratio of hits to misses satisfying, and it’s difficult not to find this whole Pin Target System massively entertaining. A few quid buys various replacements, and the construction is such that the main assembly should last for years.

Stand in a wide-open field, or down the club, and the safety aspect can be easy to monitor. Obviously, with the different target sizes, all skill levels are catered for, and if the targets are still deemed too tricky, then simply position the target system at a closer distance. If you choose to free stand the target system in the back garden, then having a suitable backstop is mandatory. I have a large metal sheet as the last line of defence for peace of mind. Get that sorted, and you’re away. Serious practise, or a series of challenging speed contests. You decide.

Quite simply a great target system that provides good practise and fun sessions on tap, and with the initial outlay made, replacement knock out targets are very reasonable to purchase.