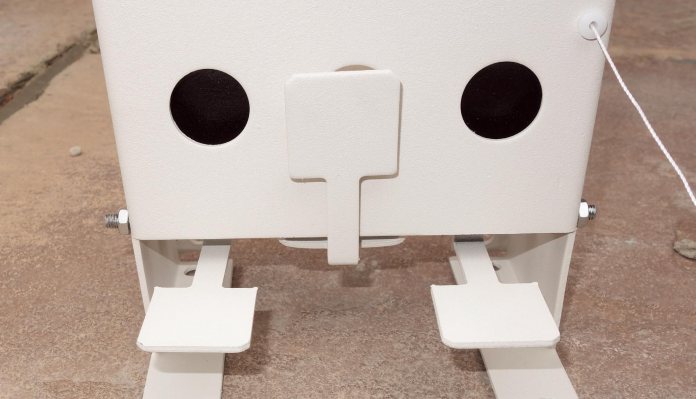 If you’ve got an airgun, you’ll need something to shoot at and Sportsmarketing have got just the thing.

First up is a Match or ‘Biathlon’ style target. Constructed from thick steel plate, the design is actually very clever, as it’s made by folding the target into shape from a single piece of steel and no welding is used at all. The target is roughly six-inches high by seven-inches wide and stands on a set of sturdy, integral feet. Holes are drilled front and rear to allow the item to be either screwed down (to a wooden board for instance) of pegged down to the ground. No pegs are included, which is a shame, as if you don’t go camping, you won’t have any available. The target needs anchoring down because of the way it works, as you’ll see. There are four screw holes on the rear however, so it could easily be hung on a wall. The metalwork is painted with a thick layer of white paint and looks like it with give many years’ service.

Priced at £24.95, there are three 28mm holes in the front of the target, behind which are L-shaped steel plates, hinged at the bottom. At rest, the plates are down at the front and up at the rear, where the black painted section makes a clear, circular target through the hole in the faceplate. If the pellet hits the plate, the energy imparted to it flips it back, causing the front part to tilt up so that it obscures the hole- signalling a hit. Once all three targets are hit, they can be re-set again by pulling on the 20-metres string that connects to the re-set bar at the back of the target. Pulling the string can move the whole target though, hence the need for it to be screwed or pegged down. The target looks bombproof and apart from my minor gripe about the lack of pegs, it’s an excellent product.

The ‘5 tab’ target takes the form of a folded steel box 12½-inches wide by seveninches high, the target is painted black. There’s an aperture (that look a bit like a letter box!) at the front, that is the full wide of the target and 2¼-inches high. The front of the cut out is angled to prevent ricochets. This product can be used free standing on the ground or hung on a wall using the pre-drilled holes. There are five one-inch shiny steel ‘tabs’ hanging down and the idea is to hit the two on the left and the two on the right. When they are hit, they flip over and are held in position on a metal bar. To re-set them, the central target is hit, which releases them again. In use, the target worked well but the ‘tabs’ are quite thin steel, so may need straightening after a serious workout with a full-power air rifle.