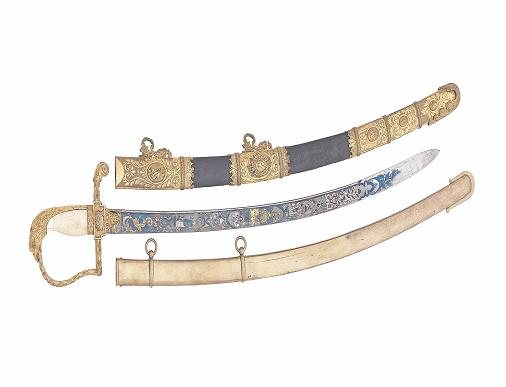 Bonhams Sporting Gun Department enjoyed a very successful 2015, with strong prices realised across a range of guns and rifles, with condition and provenance attracting the most interest.

The top price achieved was not for a firearm but a magnificent bronze sculpture, ‘The Wounded Comrade’ by Carl Ethan Akeley which depicts two elephants supporting an older, mortally wounded bull, which realised £50,000. This American-made sculpture was finally repatriated after many years in Africa.

The top rifle sold was a fine .475 Royal sidelock ejector by Holland & Holland for ‘dangerous game’ which realised £31,000.

Other notable sale highlights include a 7.65mm Model 1913 pistol by Webley & Scott, formerly owned by Sir Winston Churchill that sold for £5200, some 50x the value of a standard example. A .450 No. 3 Model revolver by Smith & Wesson previously owned by Walter Winans, the world-renowned Olympic medalist, marksman and author achieved £4000. Lastly, a fine 7.65mm ‘C-93’ Borchardt pistol, the first commercially successful semi-automatic pistol sold for £14,000.

The Bonhams Modern Sporting gun department is currently accepting consignments for its next sale on 12th May.

Alongside the Sporting Gun Department, the past year was a very good one for Bonhams Antique Arms and Armour and Sporting Guns Departments, with some record results achieved.

Department Director, David Williams, comments: “The Antique Arms and Armour market has been very stable for some years now. Our clients, private collectors, dealers and museums are all pursuing the same goal, pieces that are in good condition, and are of great quality and rarity. These are the market drivers and if they are met, top prices are achieved. This year we have seen a number or really outstanding prices achieved.”

Top item sold in the Antique Arms and Armour sales this year was a 15th Century Mamluk helmet from Egypt, which sold for a staggering £138,450. It sold to a Middle East collector and so in effect went home after 500 years.

David Williams says of this item: “Its rarity and quality helped it greatly but also the fact that Middle Eastern buyers are now very keen to repatriate their heritage, wanting to see key cultural items returned to the Middle East where museum building has been growing apace.”

He urged anyone who had an edged weapon, armour or antique firearm from the Middle East to contact him for a free valuation with no obligation to sell at david. [email protected]

Top price for a sword at Bonhams this year was £45,500 for a very fine and rare presentation sabre from Edward Solly to Thomas Harris in commemoration of their fellowship at the Battle of Leipzig. It was made by Webb of Piccadilly, London, and is dated 1813.

Top price for an antique gun was £47,250, paid for a fine and very rare Algerian toe-lock gun, design work of Mustafa, dated 1190 A.H. corresponding to 1776 AD The gun was encrusted with gold foliage and enriched with red coral beads and imitation emeralds, rubies and sapphires in brass settings.

Antique Arms and Armour sales feature approximately 400- 500 lots per sale and average selling rates of around 90%.