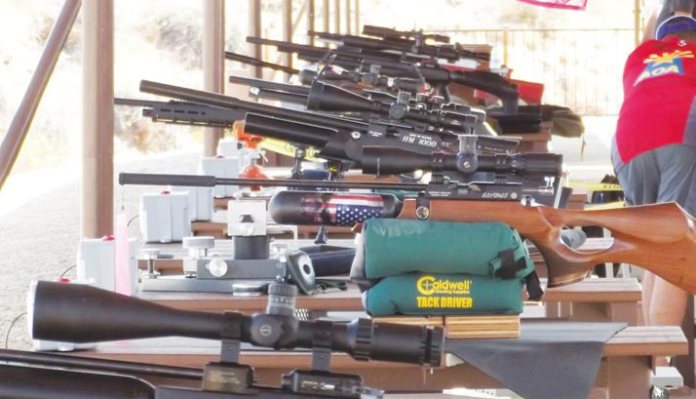 Early October saw an unexpected mini heat wave hit Phoenix Arizona, just in time for the annual Extreme Benchrest Competition, a magnet for airgunners from all over the USA and abroad. More than 120 competitors arrived at the Rio Solada Sportman’s Club, 1500 feet up in the hills above Phoenix - a new time of year and a new venue for this ever-popular shoot. The event features various competitions including FT, 25 yard, Big Bore, and 100 yard Benchrest, a springer class, and the Speed Silhouette, which is as great for spectators as it is for the shooters. Temperatures on the first day rose to 41C (106F), which made the FT competition the most testing ever, with the three UK shooters wondering just what had hit them! Fortunately a local company stepped in to help out by supplying 2000 bottles of water for the weekend, only a couple of dozen of which were left by the closing ceremony!

This is the biggest airgun event in the USA and is organised by Airguns of Arizona, who are becoming impressively professional at running it. This year, it was held over 4-days to allow the increasing number of visitors to enjoy a less rushed competition. Old friends met, and new friends were made in this most relaxed of competitions which attracts men, women and youngsters from as far afield as Europe, the UK, Hawaii, Mexico and of course across the USA. The new venue offers a 40-lane shooting range on the outskirts of the city, just 30 minutes from the international airport, so getting there has never been easier.

This is the same venue used by the USA National Benchrest Competition some 18 months ago, and, after this weekend, it’s clear it will be the new home of the Extreme Benchrest competition. However, the inside story of the weekend was that hosts, Airguns of Arizona, are working on their own higher power version of the standard 12 ft/ lb Field Target in order to provide an opportunity for the majority of US airgunners whose rifles would rate as FAC here in the UK. This will replace the current FT competition and should be ready for next year’s Extreme.

Last year’s top story was the rise of the young airgunners who gave the adults some really tough competition. This year some had moved up a class, and while they did very well, it seemed as if the adults coped with the strong, swirling winds a little more consistently. Given the, at times, brutal conditions, scores were down across the board but there was a great camaraderie in the face of adversity, as shooters and supporters lent a helping hand to the competitors wherever they could.

The spirit of the competition was summed up by one family from Florida. 63 year old Mike Brittain was due to come to Extreme with his father. However his father died earlier this summer before they could make it. Mike’s 34 year old daughter and 14 year granddaughter stepped up to the plate, practised all summer, brought their Dad to the competition, and all three of them shot in different disciplines.

This year an Extreme Big Bore Airgun shoot-out attracted some strong entries but the wind played even greater havoc with the 200 yard shots. Calibres and types ranged from a Quackenbush .308 to a mighty Bushbuck .45. Pick of the bunch were Chris Alls and Mike Pangle who drove 32 hours across the country to use their Extreme 308, hand-made, helium-filled rifles. The guns were so hot off the production bench that they hadn’t been sighted in, as they didn’t have scopes, but having borrowed some optics, the pair performed so well, they took 1st and 2nd places in very difficult conditions. These guys are both professional mechanics and they spent some 6 months trying to work out how to make rifles work with helium, without blowing themselves up. Their elaborate rig worked well, but please don’t try this at home!

The Extreme Benchrest competition itself this year had so many entries there were two qualifying rounds at 75 yards, with the final being shot at 100 yards. This demanded consistency from the airgunners which was difficult to achieve in the unusual conditions. After round 1, YouTube favourite Ted Bier was joint leader but, by round 2, both joint leaders had dropped down the rankings. The eventual winner had been equal second in both of the qualifying rounds and, even though the final ignored previous scores, John Reimer’s overall consistency won him the title.

All the European competitors were out before the final, but the European manufacturers did well – FX rifles took six of the top nine places (including first and second) while Theoben and Daystate came in the top 15. Yes! Theoben still holding its own in these rarefied conditions! Daystate rifles did well in the Speed Silho, Peykan Beyrami winning with an Airwolf .22; and top three finishes for Daystate in all three classes.

The competition’s new venue is first rate, just outside the city, but close to hotels, restaurants and shops. The shooting is more testing than it’s ever been and airgunners are meeting the challenge impressively. Yet it’s still an event the novice, young or old, can enjoy, where people are quick to help out, and everyone receives a warm welcome. It may be America’s largest airgun competition, but it’s surely one of the friendliest and most engaging events. And one of the most popular parts of the weekend for any self-respecting airgunner was the giant raffle! An incredible £17,000 worth of prizes, and we’re not talking bottles of wine. Winners walk away with rifles, silencers, air tanks, compressors and all manner of accessories. So if you fancy putting your skills and luck to the test, Extreme Benchrest 2016 will be the place to visit.