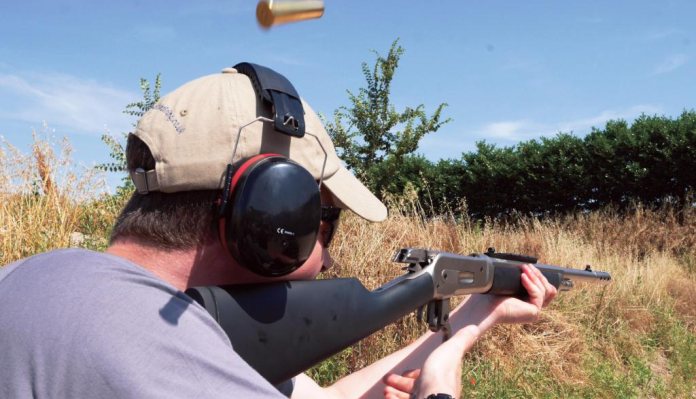 If you have heard of Chiappa, it may be for their Western replica rifles, or M1 and M4 carbine clones, or the unique Rhino revolver. Look a little deeper, though, and you’ll discover an even wider selection, as well as a company that stands for constant advances in design and production and a root-andbranch commitment to quality.

When Chiappa invited an international contingent of journalists to visit their premises in Brescia recently, UK distributors Raytrade, kindly put my name on the list. The twoday trip included a fascinating factory tour, insights into the company’s history and ethos, and an epic session on the range.

First, the tour. Because Chiappa offer such an extensive range of firearms, I had assumed that many were bought in, either from other makers in the Brescia-Val Trompia region (Italy’s gunmaking heartland), or from international partners (principally in Turkey). Not so. Aside from a couple of exceptions (most notably the Romanian RAK/PAK guns and the Turkish Triple Crown 3-barrelled shotgun) everything from blank firers to the new Black Rhino 9mm Personal Defence Weapon is made in Chiappa’s own Brescia factory. Consequently, the same digitally monitored quality-control procedures are applied to every component of every product at every stage of its manufacture.

Only surface treatments such as case-hardening and blacking are sent out to another company, itself a Chiappa subsidiary. It makes sense to handle these hazardous chemical processes at a dedicated site, whilst its location amid a cluster of automotive and general engineering businesses means that it is never short of work.

Chiappa’s 55,000sq.ft HQ is therefore the epicentre of their design and development; drilling and rifling, milling and casting, shaping, inletting and finishing, assembling and testing, packaging and shipping, and all the other administrative processes necessary to get their products into the hands of distributors, retailers and shooters in over 50 countries worldwide.

For me, the keynote of Chiappa’s manufacturing approach was agility. By this I mean that their investment in advanced tooling and computerised production control enables them to respond quickly to every order received, shifting production seamlessly from one model to another as required. As well as keeping their customers happy, this enables them to do OEM work for Browning, SigSauer Remington and Umarex, whilst minimising their need for warehouse space.

With so many models, a wide range of materials and techniques are employed, each chosen to meet its purpose in the most effective and efficient way: aluminium frames for Rhino revolvers sliced from custom extrusions and CNC milled into shape; receivers for Western lever guns milled from steel castings; cylinders and body shells for blank firers cast from Zamak and incorporating steel inserts or brass bearings as necessary.

The tooling is impressive too – we saw scores of dies, jigs, cutters and tungsten carbide rifling buttons all neatly racked and filed, pantographs multiplying revolver grips, CNC machines drilling and shaping complex components, and the kind of robot you’d expect to see in a car factory picking, deburring and polishing pistol frames. There’s even a 5-axis CNC machine in the wood shop – of the sort used by Ikea – that Chiappa has developed into the ultimate tool for shaping and inletting stock blanks. In a typical Chiappa fusion of tradition and innovation, this really comes into its own in the production of percussion muskets, where it guarantees a perfectly straight stock precisely inlet for every barrelband, spring, patch-box, etc.

Quality control is constant, with each check linked to a QR-coded scan that also serves to track production. Having first been sent out “in the white” to the Brescia proof house for pressure testing, when fully assembled, each gun is thoroughly tested for function and accuracy on a 50m range beneath the factory. Here too, statistics are fed back into the QC system. All explains why they can back every gun with a lifetime warranty and a free repairs and spares service.

I’m always fascinated to see how things are made, but I must confess I hadn’t expected to see just how well Chiappa do things, or to discover how the extraordinary diversity of their production –in price as well as design- actually lies at the heart of their success, since they are always producing something for someone somewhere, and cheap volume products pay for the technology required to manufacture higher-end items in a cost-effective way.

Success is always about people as well as machinery and materials. Chiappa is a genuine family firm, and our principal host for the visit was Giarda Chiappa, granddaughter of the company’s founder. Giarda began her career with holiday jobs and trade shows when she was just 14. At the same time, she took up Cowboy Action Shooting to help promote the sport and Chiappa’s contribution to it. Her deep commitment to the company and to shooting is complemented by a wealth of experience and expertise and by a forward-looking mind-set.

Inevitably, the quality and versatility of Chiappa’s production requires a highly skilled workforce. Here too the firm blends tradition with innovation. Thus, whilst they can count on the expertise of many veteran employees within their 100-strong team, they also take on around 15 apprentices each year, standing them in good stead by teaching them to do things the ‘Chiappa way’ from the start.

A prompt start the next day and an hour’s drive took us to a range deep in the fertile countryside of Lombardy, where everything promised a great morning’s shooting. In one bay there were two tables spread with guns: an 1858 Enfield musket; an 1860 Spencer carbine in .45LC; 1886 and 1892 lever actions in .45/70, .44 and .357 (in both classic and modern styles); a 12-gauge Winchester 1887 lever-action shotgun; 9mm replicas of the US M1 carbine and AK74; a 9mm AK74 pistol (only pointless if fun itself is pointless!); a diminutive Double Badger combination gun in .243/.410; .22 LR replicas of an M4, AK74, Beretta M9 and Colt 1911; a replica 1873 Colt single-action revolver in .38SPL; and finally, a suite of Chiappa’s unique Rhino revolvers in snub-nosed, standard and target versions, with black, nickel and “Nebula” finishes, and chambered in .357 and 9mm. Neatly-stacked on a third table were over 2000 rounds of ammunition.

In a second bay, there were just four identical guns: pre-production samples of the firm’s most radical departure to date: the CBR-9 (Chiappa Black Rhino 9mm). Production of the gun has been licensed to two companies: Tanfoglio, who are producing a selectfire version (TCMP) for military use; and Chiappa, who are developing civilian versions that conform to the diverse legal restrictions faced by their worldwide customer base. Happily, this includes a carbine version for the UK market.

The CBR-9 features a closedbolt blow-back mechanism, so it’s clear that the internals will have to be radically different to achieve the locked-bolt straight-pull format of a manually operated UK-legal version. Nevertheless, Chiappa plan to have one available by the end of next year and even suggested the possibility of a launch at IWA 2020. As a prelude to this, we were shown a prototype fixed stock. This has a comb that can be flipped downwards when using iron sights and upward for use with a red dot or scope: an approach presumably inspired by Russian Saiga/Dragunov designs.

In standard guise, the CBR-9 sports a 9-inch barrel with three linear ports near the muzzle that are positioned to sit precisely between three similar slots in the flash-hider: a patented arrangement that significantly reduces flash and blast. Moving back, there’s a polymer handguard complete with Picatinny accessory rails on each side and a folding vertical fore-grip underneath, as well as a slot for the folding charging handle, which can be easily reversed for right- or lefthand operation. This is another feature that would have to be changed in a manually operated version so that it remained deployed between shots, rather than folding flush.

The body of the gun consists of an upper and lower receiver, secured by a small front and larger rear, as in an AR15; whilst the manner of removing the rear pin – which also comprises a sling mount – as per the Steyr AUG. Controls are mostly ambidextrous, with bolt release paddles located on each side of the hand-guard and a reversible selector switch (marked for three positions but limited to two) located on the upper receiver above the pistol grip. The exception is the magazine release, which sits on the L/H side of the grip, under the thumb of an R/H shooter (handy) but under the trigger finger of a southpaw. I thought this would be a problem on the range, but never popped the magazine by accident, so I guess it’s okay. Chiappa say it is reversible, but I couldn’t see how, and in any case, that just seems to relocate a potential problem rather than solving it.

An integrated Picatinny optics rail runs the full length of the upper receiver and handguard and is inset with green fibreoptic elements that serve as emergency sights. At the rear is a sliding 2-position sheet-metal stock terminating in a chunky polymer butt-plate. The stock locks up securely via a sprung latch at the back of the lower receiver. Otherwise, the lower receiver is basically just a grip frame. By contrast, the upper houses a unique and quite complex mechanism featuring an underslung hammer, dual return springs, and elastomer recoil buffers. It also mounts the barrel, the bolt-release, and the trigger, which has a linkage that is bullpup in style but not in feel.

The pistol grip is also the magazine, nicely flared for easy insertion, and magazines drop free when released. Magazines are polymer, hold 15, 18 or 30 rounds and show a proprietary double-stack/singlefeed design with asymmetrical feed lips. Chiappa claim this ensures they will work even when damaged, and for what it’s worth I didn’t observe a single stoppage on the range.

Overall, the CBR-9 was wellbalanced, intuitive to operate and sweet to shoot, proving readily controllable when used freehand, with a double or singlehanded hold, as well as from the shoulder. The emergency sights were useable, but the gun really came into its own when fitted with a red dot, the stock geometry evidently having been designed with this in mind.

It’s a crying shame that most of the Chiappa guns we had so much fun shooting are no longer legal to own in the UK, but at least we’ll get a version of the CBR-9, and of course we already have the brilliant Rhino pistols in 12/24 format.

As much to the point, some of my favourite guns on the day were the lever-action rifles, especially the big 45/70s!

My thanks to Steve Kelly at Raytrade and Giarda, Susanna, the range team, and everyone at Chiappa for making this such an enjoyable and interesting trip, and for offering shooters such a great choice of high-quality guns.