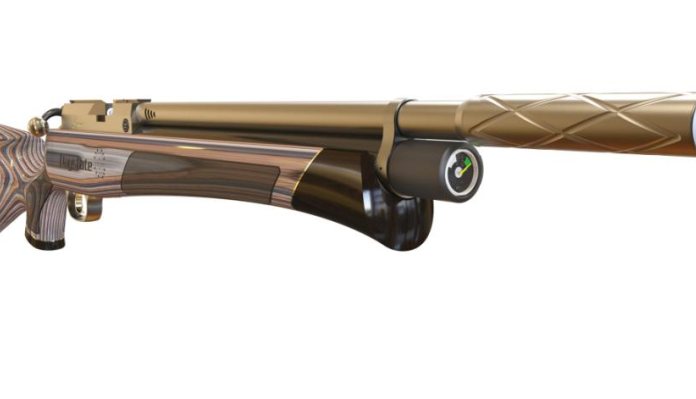 Think pneumatic airguns, and the name Daystate comes readily to mind; not only as pioneers of the modern PCP, but also renowned for their innovative, groundbreaking products. So, the invitation to attend their special 40th Anniversary Celebration at the Royal Armouries Museum in Leeds, was an opportunity that no self-respecting enthusiast was likely to turn down!

As prestigious venues go, the Royal Armouries Museum takes some beating, and if you’ve never been, make it a must-do for the new year! This purpose-built museum housing a huge collection of arms and armour, is effectively Site Two for the Royal Armouries, taking the overspill that was previously stored at the Tower of London (Site One). Fort Nelson down in Portsmouth, is Site Three, housing the artillery collection.

On arrival at the Wellington Suite, we were greeted by the ever-enthusiastic face of Daystate’s Development Manager, Tony Belas, and various company staff, all there to ensure the occasion went smoothly. Coffee, pleasantries, and a few sneaky peaks at the incredible array of rifles on show, and we soon began to take our seats to enjoy a mini lecture from Mark Murray Flutter, the Senior Curator and Analyst for the National Firearms Centre. Learning about the earliest pneumatic airguns was truly fascinating, and seeing them on the table up close afterwards, was a rare treat too.

First there was the Deimar, a curious combination; designed by Deimar, a German, and made in England. This amazing early airgun from 1770, utilises an air reservoir held around the barrel, giving little away that it’s air-powered at all! Next came the Girandoni circa 1779, an Italian/Austrian venture, this time featuring a sizeable butt reservoir, which could generate serious power, which explained its popularity for boar shooting at the time; thought to have been undertaken at distances of up to 200 yards. Designed by Tyrolean inventor, Bartholomans Girandoni, this model was the first airgun to be adopted and used by the military from about 1790 until 1801. Used for hunting, it even had a magazine system but was notoriously unreliable. With 1500 pumps to get the reservoir up to power, this was an arduous task. Dangerous too, since no system then existed for accurate pressure testing, with fatalities sometimes the result! Leakage was perhaps the biggest problem with these rifles; yet despite this, it was extensively copied by the English and others including the German Staudemeyer.

1815 (Battle of Waterloo incidentally) saw the development of the Calvert design, featuring the distinctive ball reservoir, that surprisingly, could be fitted either on top or underneath the action. Again, with pressure testing in its infancy, these vessels could sometimes just explode! The rather neat French designed Gifford CO2 air rifle appears on the scene in 1892.

Spring power came next, demonstrated in the form of a Lincoln Jeffries under-lever circa 1905, and whilst there wasn’t one on show, pump-up power from Benjamin followed in around 1930. Finally, we learned about the ‘sealed pattern’ - a system of marking early prototypes, to be effectively a blueprint for production. All absolutely fascinating, and the perfect lead-in as to why we were there.

Next up at the lectern was Tony Belas, to give us the origins of Daystate, where they had come from, and where they were heading. The story starts with a chap called Don Lowndes, who by all accounts, was a real character, a bare-knuckle fighter, into racing cars and motorcycles. Don was a deer farmer, and his development of a tranquilliser gun was apparently born out of necessity. One thing led to another, he was soon involved in protecting rhinos against poachers in far flung locations, as he promoted his inventions around the globe.

Gun number one, the original prototype, was based on the Sheridan Silver Streak airgun, and was a pump-up design. Early production models were of this design, known either as the Air Ranger (tranquilliser), and Sportsman (airgun design). Finance was a problem in the early days, until Ken Gibbon and Mike Seddon stepped in, working alongside Joe Wilkins to develop and produce what was to become the first Huntsman. I’ve often wondered where the curious name Daystate originated from- and it was nothing more exciting than the existing name of an off the peg Limited company, bought in the early days by Ken and Mike, as a means to an end. And so, it was that the Daystate air rifle company was registered at Companies House on 23rd October 1978.

Don’s preoccupation with the tranquilliser side of the business left Ken and Mike to concentrate on the airguns, and production soon began at the original factory site by the canal at Stone, Staffordshire. Daystate’s colourful history includes the production of rubber bullet riot control guns, and whilst these weren’t on display at the Royal Armouries, I distinctly remember seeing them with their huge revolving chambers, on my first trip to the original factory site in the mid ‘80’s. Paintball guns were also produced, but of course it’s Daystate’s airgun production that has stood the test of time, and as previously mentioned, pioneered the modern PCP that we all now take for granted.

Original models were built with stainless steel tubes, but after about number 50, this changed to brass. In the mid ‘80’s, Don retired, but his spark of inspiration had well and truly been lit. My old FT team mate from Markyate, Barry McCraw, was causing a stir with his pneumatic in the early days of Field Target shooting, (really a collection of components from Daystate, tweaked and perfected by this clever engineer), and whilst his rifle had been extensively rebuilt, many shooters were starting to take notice of his success. The Daystate Huntsman FTR was the first pneumatic competition PCP that Daystate produced, influenced heavily by Barry, and Air Arms were aware they had to respond- and their Shamal was the result. My FTR remains one of the best airguns I’ve ever owned, but now sadly sold, damn it!

But for Daystate, the FTR was just the beginning, of an incredible run of models. The Huntsman MKII was a lighter build, as was the LR90, with its smaller, one inch diameter tube. Their 2000 was a landmark for them (introduced in 1992), as it was their first dabble with a regulated action.

Ground-breaking airguns come and go, but one of the key models to have stopped everyone in their tracks, has to be the MK3, introduced 2002/3; the result of a collaboration with Steve Harper and David Snook. Shot output was electronically controlled along with an electronic trigger, and this was mind blowing stuff for its day. Mapped Velocity Technology (then Mapped Capacitor Technology) the seriously expensive research around the Pulsar project, there really has been milestone after milestone, and with the infectious enthusiasm of Tony Belas back at the company, that drive, and vision looks set to continue.

Daystate are of course known for some extreme high power models, and with 50 ft/ lbs versions of their side-lever Red Wolf dominating results at the Extreme Bench Rest event, held in Arizona USA in 2018, this model understandably took pride of place at the celebrations at the Royal Armouries in a central display, surrounded by lists of the results. A marketing dream!

And so, to the Special Announcement. Firstly, the Airgun Support Package, a scheme where the company intends to make it easier for their products to be experienced by a wider public; the success of which remains to be seen. But for us assembled hacks, the real breaking news was of a special edition of the Huntsman, to be called Genus. OK; perhaps a little underwhelming on the day, given this company’s previous track record for the dramatic. But that is to miss the point, as it is of course the Huntsman model (now in its seventh incarnation) that has remained a constant, throughout all the turbulence and excitement generated from this most innovative brand over the last four decades.

Produced in four calibres including .20, in either 12 or 40ft/lbs it will come with a fully shrouded barrel, Odb Silencer, Huma regulator, hard case, and a commemorative book to celebrate the event. Sounds mouth-watering, with a price to match- £1849. But special editions are something of a business model for Daystate these days, and the Genus is the 24th such release. A fitting tribute to the brand then, to be released sometime around Feb/Mar 2019.

This event really did feel special, and with Simon Gibbon, (son of co-founder Ken), and Richard Lowndes (Don’s grandson) both in attendance. Not to mention that amazing first ‘Prototype No.1’ on the table to handle, whether an airgun historian, or one of the few lucky enthusiasts that had stumped up £70 for an invite, it was hard not to get a little excited. And so, after 40-years in the business, it’s time to reflect on just how far they’ve come. It’s been quite a journey, but on behalf of enthusiasts around the globe, and for their major contribution to the sport we all love, may I wholeheartedly add my congratulations, to a British company with humble beginnings, that has earned its place in the history books.