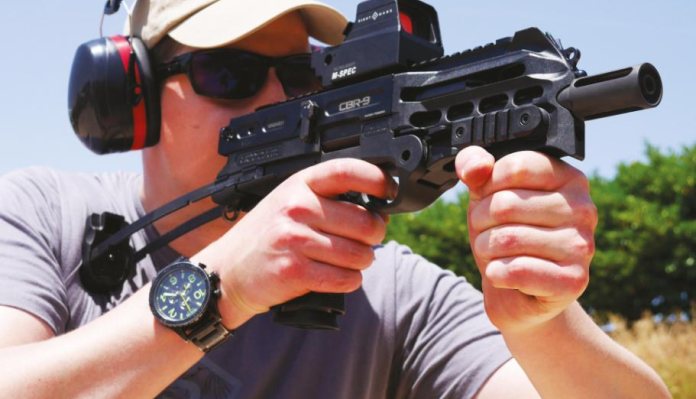 Chiappa Firearms have been operating in this industry since 1958 and now export to over 60 countries worldwide. To this day, they are still family owned and are well known for manufacturing a diverse range of product; historic replicas of American firearms, lever-action (rifles and shotguns) and single shot BPCRs (black powder cartridge rifles), muzzleloaders, airguns, rifles, handguns, signal guns and blank firers. During this time, they have been constantly developing and improving their manufacturing processes, in order to make all their products represent great value. Recently, they have seen growing success with their range of Rhino revolvers and have learned to adapt firearms to meet different legislation requirements in various countries. For example; they launched the 120DS long barrelled revolver (LBR) for the UK market. Raytrade UK Ltd, their distributor, kindly invited me to visit the factory in Italy where they are made. While there, I got the chance to try some guns, including a new, exciting addition to their range.

Rise of the machines

Our tour group was made up of a selection of journalists from various countries and started with a walk through the offices and a brief outline of what the various departments do. During this, I noticed the long wall of gun reviews, including a fair number of Shooting Sports articles; always nice to see! First up, we were shown a quality control room, used to check the tolerances on a Rhino revolver frame, for example. This is done at the beginning of a batch, to make sure that the production machinery has been set up correctly. From here, we were introduced to the main factory floor and a sea of equipment, including a large number of computer numerical control (CNC) machines and operators.

Our guide for the two days was Giada Chiappa, who went on to explain how efficiency was key to their success. The CNC machine they use to manufacture the hammer for the Rhino revolvers used a tubular billet of aluminium that was then shaped on a vertical axis, from top to bottom. The Rhino’s frames are cut from long lengths of extruded aluminium, that was already in the rough dimensions of the pistol. Both techniques making the manufacturing more cost-effective, efficient and fast. In addition to the CNC facility, Chiappa have also invested in the ability to produce their own barrels in house. It was interesting to see the button rifling method being used, this process sees a carbide tool called a ‘button’ being pulled through the bore while being rotated at a set pace, which determines the twist rate. The larger the bore size, the quicker the process, with one operator and machine capable of doing up to 200 a day.

Chiappa manufacture and sell a lot of cost-effective, blank and live firing .22 LR pistols. These are manufactured predominately using Zamac, a widely used, zinc alloy, which is melted then extruded into a mould. Various models also incorporate steel inserts, such as the .22LR models. They also use plastic injection moulds for various components, such as pistol grips etc. The high volume of manufacture has made it viable for the company to invest in a machine that’s capable of smoothing and polishing the freshly moulded frames at speed. It was fascinating to watch! When they receive an order, they like to get it out of the factory and to the customer with no hold ups. In order to gain control of the manufacture of the wooden furniture for their huge range of firearms and shotguns, the latest addition to the factory is the wood department. At the heart of this operation, is their own 5-axis machine, which can take a blank and machine all the complex inlets accurately and quickly, it’s the same machine that IKEA use!

We were also taken upstairs and introduced to the development team, who are responsible for working on new projects. The latest is called the CBR-9 Black Rhino. This represents a significant step away from their traditional product lines. It is a semi-automatic, blow-back 9mm pistol, built around a steel upper receiver that contains all the mechanical components including low-profile, fibre-optic sights and a full-length Picatinny rail. The polymer lower hosts the ejector and double-stack, single-feeding proprietary magazines. Importantly, all the controls are ambidextrous, and it includes a built in, retractable stock and a vertical folding front grip. These features mean it can be offered to the civilian, police and military markets worldwide. The company are in the process of developing changes to the standard design, in order to meet the legal requirements in around eight countries, the big news is that the UK have been included! In collusion with Raytrade UK they are working on a manually-operated, straightpull 9mm carbine with fixed stock and longer barrel to meet UK requirements, due in 2020!

After a walk through the warehouse and the spares department, we were shown the area where assembly, quality control and packaging takes place. Giada went on to explain how every firearm receives a unique QR code, allowing it to be tracked electronically through the various stages, which include; assembly, proof house, test range, cleaning, engraving, quality control and packaging. This system means that no product can leave without passing each stage. It also allows them to track productivity and to collect data, allowing them to price up jobs and provide an accurate timescale for completion; all clever stuff! The tour came to an end with a bit of company history and how they started in a garage and ended up in the 55,000 sq./ft factory they now have. We also took this opportunity to get hands on with the CBR-9, stripping it down to its component parts and reassembling it; all we needed to do now was to have a go!

The following morning, we were taken to a local pistol range and we were all looking forward to trying out some of their guns and it turned out there were 24 to try! Having a look along the table, the selection included; various versions of the Rhino revolver in 9mm and .357, a FAS 6007 .22LR target pistol, M9 and 1911 semi-auto .22LR pistols, a Colt-type, SAA 1873 Regulator single-action revolver in .38 special, Double Badger combination gun in .243 and .410, a PAK-9mm pistol, RAK-9mm rifle, MFOUR-22 rifle, M1 Carbine in 9mm, Winchester 1887 lever-action shotgun, Spencer rifle in .45 Colt, an Enfield muzzle-loader, Alaskan lever-actions in .44 and .357, a Ridge Runner and a 1886 lever action in the mighty 45-70. All complimented by a huge stack of ammunition! The other range included the CBR-9, and after a safety briefing, I made a B-line for it! I put it through its paces, by using all the controls, fast reloads, trying it with and without the stock or vertical grip, with the fibre -optic sights or a red-dot sight. All while using as much ammunition as possible and it performed very well. It was a tough job, but somebody had to do it!

Over the next few hours, I took the opportunity to work my through the other firearms on offer, as there were various mechanisms and calibres that I had never tried before, like the Spencer and muzzleloader, it’s not very often that you get such a wide variety from one manufacturer. Not all were applicable to the UK market, like the M1 Carbine in 9mm, which was just too much fun! I spent a lot of time with the lever-actions and the Rhino revolvers, as we do have the 120DS LBR version in the UK. I was drawn to the 2” barrelled version in .357, you certainly know when you pulled the trigger on that!

I thoroughly enjoyed the Alaskan lever-action in .44 magnum, it was smooth to operate, great fun and I got pretty quick with that by the end of the day! It was not all easy though, with the sheer amount of rounds going down the range and the fact the guns were laying out 31°C heat, meant that they got seriously hot, I don’t think I had many fingerprints left by the end of the day. This was combined with a few bruises from firing way too much 45-70; the things I do for the magazine! Unfortunately, all things come to an end and it was soon time to go home, having had an excellent couple of days. I certainly felt thoroughly educated, this having been my first factory visit and now have first-hand experience of a wide selection of Chiappa’s great firearms. I have already asked Steve at Raytrade if I can have the first UK test of the UK legal CBR-9. Watch this space!