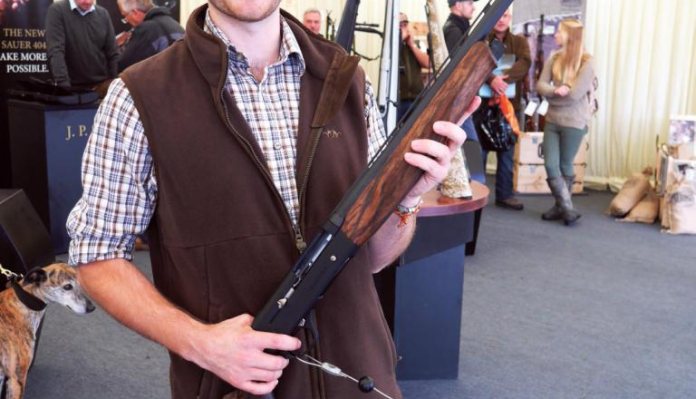 First off, Jules’ take on the weekend. In an increasingly crowded calendar, the Midland Game Fair remains an essential event: a place to buy and sell guns, to tog oneself out for the new season, and to check out all the new products at the Airgun Expo. Shopping aside, it’s also a great opportunity to break some clays and send some airgun pellets downrange too, whether for competition, coaching or just for fun.

Umarex’s new UK distributor, John Rothery, rose to the occasion in style, creating a massive stand, showcasing all their latest airguns, complete with a multi-lane range to try them on. BSA had the same great approach too, letting you transition seamlessly from perusing their range to actually trying it out. Air Arms and Crosman (ASI) were putting on a fine show too, although other A-listers, such as Daystate- Brocock and Hull Cartridge were conspicuous by their absence.

In a year now packed with great shooting shows, the Midland could still boast some new product launches.

First up is Crosman’s DPMS SBR. The spitting image of an AR-style centrefire rifle, this is actually a 4.5mm smooth-bored, CO2 BB gun that combines striking looks with clever internals. As a major player in the AR15/M16 game, DPMS is the perfect partner for airgun giants Crosman, building in an unprecedented degree of authenticity.

SBR stands for ‘Short Barrel Rifle’, a moniker that delivers extra kerb-appeal in the USA, where such guns need a licence. Here it translates as ‘seriously compact’ and signifies an OAL of just 26.9- to 30.4-inch via the 5-position stock. You also get a Picatinny-topped upper receiver, Quad-rail hand-guard, adjustable flip-up sights (BUIS) and a vertical fore grip (VFG).

This Crosman’s authenticity runs deep. The ratio of metal to plastic is right and the safety, magazine release and dust cover work just like the original. The T-handle and forward-assist are operable, though non-functional. It even strips like the original. The only thing you can’t do is swap the pistol grip and hand-guard for aftermarket parts (big deal!). The magazine is the true heart of the gun, though, housing two 12g CO2 capsules, 25 BBs, and the gas valve. Brilliantly, this means it hefts just like a full 5.56mm magazine, whilst rendering the gun inert when removed. Quoted velocity is 430 FPS. US guns will go full-auto (!), but UK-spec ones are semi only. The price? Just £249.

Keeping to the AR theme, but stepping up the power, we have the new TAC R1 .22LR rifle from Hammerli (a Umarex brand). Successor to their Colt- and H&K-branded tactical rimfires, Umarex’s choice of an in-house brand helps keep the TAC R1 under the magic £500, making it a great way to get into practical rimfire shooting, without breaking the bank. Features include a slim octagonal, M-Lok compatible, rifle-length handguard, a chunky stippled pistol grip, and a smart, 6-position telescopic butt with multiple sling-attachment points.

As with previous Umarex offerings, the barrel is a slim steel tube, tensioned within a wider alloy shroud, but this time the end cap has a moderator-compatible ½-inch UNEF thread. Internally, the TAC R1 has a neat adjuster to ensure reliable cycling, but can’t be fully stripped or fitted with an aftermarket trigger. Pull is adjustable from 6.6-9.9 lbs: OK for fast target work, but less so for precision/hunting duties. Standard magazines hold 20 rounds, but 30-rounders are available, and the design is common to all Umarex’s tactical .22s.

Debut no.3 is Sauer’s new SL5 semi-auto 12g shotgun. Although it’s made in Italy by Breda, and featuring a Benelli-style inertia system, the SL5 has a distinctly Germanic look. This includes a dashingly-contoured receiver and fore-end; a satin-black finish with silver accents on the bolt, safetybutton and shell-lifter, a crisp Sauer logo on the bolt-release, and a unique magazine end cap with scalloped finger grooves that is at once neat, stylish, and user-friendly. The wood is straight-grained for strength, and laser-enhanced for looks. You also get 5 interchangeable choke tubes, a shim system for drop and cast, a smart black ABS case, and even a set of tactical-style, push-fit QD sling loops. Barrels are 28- or 30-inch triggers have a crisp 5.5lb pull; and overall weight is 6.6lbs (28-inch). Base price is £1795. I really liked it and hope to try one soon.

Further upmarket, is the new RB Regal Deluxe 12g O/U from B. Rizzini. Featuring Rizzini’s elegant Round Body action, The Regal shares its opulent acanthus scroll engraving, select Grade-3 wood, exquisite chequering, silver furniture, extended trigger-guard and steel grip cap with the RB EM Deluxe and adds a set of side-plates. These augment the decorative space and blend the action into the hand of the stock, enhancing the gracile looks of the gun, as do a solid rib and the straight, Londonstyle forend. Smaller parts are hand-engraved, but most of the decoration is done with cuttingedge laser technology, a fact given away only by its perfect evenness and an asking price of just £5650. Not peanuts, but still magnificent value for a gun this handsome. And if that’s still out of reach, then check out the RB Regal Standard, whose rounded grip, blacked furniture, and reduced hand engraving bring the price down to £4960.

The show’s biggest surprise was seeing ATN’s long-awaited 4K digital day/night sights on sale on the A1 Decoy stand. ATN weren’t at the Midland themselves, but A1 Decoy were understandably doing a brisk trade, and offering a great show discount. Representing a major format change, the 4K X-Sights incorporate their digital wizardry within a conventional day-scope layout, improving ergonomics and making them easier to mount. Better still, each sight is supplied with a comprehensive mounting kit, so you can just unbox, mount-up and go shooting!

The X-Sight can receive data wirelessly from an ATN laser rangefinder, and, once loaded with your ballistic data, can automatically adjust the reticle for range, and even indicate the wind hold required. A neat scope-mounted unit is on its way, too, further streamlining the ranging process. All this makes the 4K X-Sight perfect for airgun and rimfire shooters, who rely on accurate ranging and trajectory management for successful hunting, especially at night. They’ll work on centrefires too, of course but the real benefits are with loopier cartridges at shorter ranges. Two models are available: a 3-15x50 and a 5-20x50, priced at £849 and £949, respectively.

I’ve only missed one Midland Game Fair since the mid 90s; so, I’ve seen it evolve over the years and, in some respects, I miss the ‘old days’, when just about every distributor, manufacturer and dealer was in attendance. However, it’s fair to say that it’s not like it was, with fewer companies in evidence. There are just so many more game fairs and shooting shows these days and it’s just not possible for all every company to go to every show. However, I still wouldn’t miss the Midland and it sometimes feels like my second home and there is still plenty to see and do.

When I went to the BSA stand, I was lucky enough to meet Jason Collington, who has started the first new Bell Target team to be formed in 30-years. The team was Jason’s dream and he’s an ATEO coach, trained by Dave Mills. Dave has also provided the actual bell targets and Jon Hatton of BSA Guns has been an absolute star and donated an Ultra and a Scorpion rifle to the team. None of this could have become a reality without their support. Sporting Supplies in Bloxwich has provided pellets for the competitions, so it is a real community project. They hope to involve youngsters going forward, to promote safe use of rifles and encourage more child/parent time for those with parents who shoot, a situation close to their hearts. The rifles looked great and I wish the new club well for the future.

It was great to be able to examine the new Target Sprint rifle that Air Arms have developed, and it’s already proven itself in competition. The clever lever that activates the breech shaves vital time off the reloading process and it’s very slick – I wonder if we will see this action on other Air Arms products in the future. If you don’t know, the sport of Target Sprint involves running, broken up by target shooting with an air rifle, where you have knock down targets to aim at. It’s a bit like the sport of Biathlon that you may have seen in the Winter Olympics but with the skiing replaced by the running stages. I can see it becoming more popular year on year and Air Arms have really got behind it and this new rifle should ensure that competitors have top-notch equipment.

I was really pleased to be able to meet Paul and his colleague, a couple of representatives of the Wild Deer Association of Ireland and they explained how they are the largest organisation of its kind in Ireland and represent those involved in the day to day management of deer, deer stalking and the conservation of Ireland’s wild deer population. They are clearly very passionate about what they do and host events throughout the year to help develop the skills of its members and the public and to promote the Hunter Competence Assessment Programme. They also advise on road traffic accidents that involve deer and help landowners who have deer on their land that are causing damage and the best way to deal with the issue.

I met Ian Jones on the Optisan stand and I’ve personally been very impressed with the EVE 3-12X44Pi scope I tested recently. I’d not previously examined any of the red dots very closely and now that I have, I can report that they’re very nice! The military specification RMX202 sight has a Picatinny fitment, is 1x power with a 20mm lens and is powered by a single AAA Lithium battery that provides 5000-hours run time! At only 175-grams it won’t alter the balance of the rifle it’s fitted to and an 11-step dial controls the brightness of the 2 MOA dot; it’s also very well priced at under £200. There is also a slightly larger version, the RMX302 at £217.60, that uses an AA Lithium battery. I was lucky enough to come away with a tasty CX6 scope that has a mag range from 1 to 6 and has an objective lens of 24mm. It has an MIL-M33 reticle that can be used for rangefinding and holdover and I look forward to testing it and an EAR3o reach forward QD mount in action at a forthcoming CSR competition.

I got to shoot the Hammerli TAC R1 .22LR rifle on the Regency Rifles range and I really liked the experience! It handles just like a ‘real’ AR and at the bargain price of £499 it will sell like hotcakes. Yes, it doesn’t have a ‘proper’ AR bolt and the trigger can’t be swapped for an AR-style aftermarket unit, but I really don’t think any buyers will worry about that, they’ll be too busy enjoying the shooting experience, thanks to the lovely handguard and butt.

Well, like I said, other shows may have had an effect on the Midland, but I’m sure that people will attend in their masses, just like this year, as there’s still plenty do see and do for all the family and I’ll definitely be back again in 2019.